Sly Marbo is Back 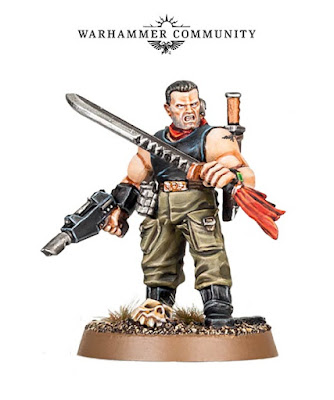 Well, sort of a surprise today.  GW, due in no small part I'm sure to community pestering, has brought back Marbo.  I think most of us long time Guard players have fond memories of this lone warrior.  Now he is different with some good and bad here.


First up, you can find his rules here.  He is a lot cheaper than he used to be, but importantly Marbo has forgotten where he put his demo charges over the last few editions.  This is not a deal breaker mind you, but damn does it hurt to lose those charges.  He is only 25pts though, so much cheaper which does make up for the loss.

Pretty much the same rules as before, fearless, fleet, hit and run, feel no pain, stealth, move through cover.  He's Behind you is pretty much the same, he starts in reserve and when he comes on you place him anywhere on the board as long as he is 1" away from enemy models, and can't move in the movement phase.  Like a shadow is new, but basically when he destroys an enemy unit or makes a sweeping advance or successfully hit and runs, you can place him in ongoing reserves.  Place a marker on his position and when he comes back he must be deployed within 18" of that marker and 1" away from enemy units, and can't move in the movement phase.  Loner is basically the same, he can't be your warlord and can't be issued orders.

Master of Ambush is new, basically after deployment, scout, infiltrate, etc, but before the roll to seize happens, you nominate three pieces of terrain as booby trapped and place markers on them.  Enemy units treat that terrain as dangerous terrain.

The Pistol is basically the same, 12" range sniper, ap 3.  Same issues that sniper weapons have.  His blade is poisoned 2+ like before.  He has melta bombs, frag and krak grenades as well.  With the demo charges gone, Marbo is going to have to be played differently.  He has 2 wounds, but again, he is only T3 and does not have eternal warrior so he is really easy to take out of the picture.  The same is for Feel no Pain, its very situational.  He can't be used a surprise pie plate any more, which was his greatest use with the demo charge.

Now hopefully this means we will see him in the next edition, and don't be surprised for this to change again.  But you now can play around with him in the last few games of 7th Edition.

I wish he had shrouded, as he really relies on cover saves to survive at all, but stealth is still something, but you really want to be finding ruins and other 4+ cover saves to get them to 3+.  You can try using psychic powers to buff him, but that means you have to keep him close to your psykers.
Really he works best on the outskirts of the battle.  Popping in to deal with weaker units that don't have a lot of support around them.  But always keep in mind that he is not going to be assaulting when he comes in so your going to have to wait a turn before he can assault, and his single shot pistol is pretty meh shooting.  The hardest part with marbo is keeping him alive so he can get close to take out the enemy units in CC.  I really wish that they had given him the ability to charge out of reserve.

You basically have a budget assassin, with the same strengths and weaknesses that they have.  In the right situation he will do great and can pick on weak units and in the right terrain will be hard to take out.  But with ignores cover and his low toughness, he is also not hard to kill at all.  He is great for snapping up objectives in maelstrom games due to his mobility.

Against certain armies, marbo will really struggle, mainly Tau, with lots of ignore cover and intercept, he will show up and likely die.  But against other armies he can shine well.  Main things to consider is how are you going to keep him alive for a turn so he can assault his target and take them out.  The booby traps are not bad, but will really only account for a few models during a game, though it can psychologically help in having an opponent scared of going into those pieces of terrain, but good players will know that the risks of dangerous terrain is pretty low.

Its great to see Marbo back, and I look forward to seeing him in 8th edition as well.  To close out, here are some pics of my conversion for him that I did a good while ago(during 5th Edition). 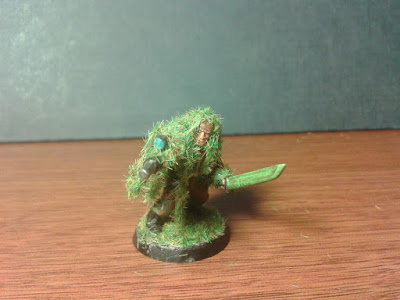 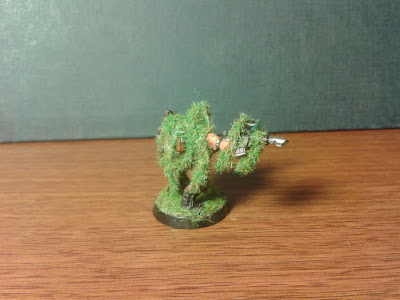 Cadia Stands!
GG
Posted by Grumpy Guardsman at 9:06 AM