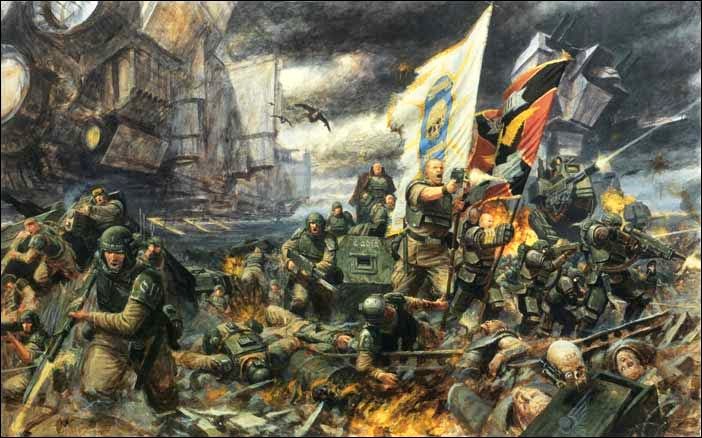 For the second iteration of this series, I will be expanding off of the general concepts of starting an army and moving on to focusing on how to build a good core.  As a note this will generally still be applicable to building an armored army, but that one is generally the most different and will have to be covered separately.  So what is the core of the IG army?  Infantry, and by infantry I don't just mean the troops.

But they really are the important ones here.  As you have generally decided what direction you feel like going in, no matter what you are going to be bringing infantry to the fight.  Even if you are going armored, you are going to need two troop choices.  So it comes then to look at what should you be getting and bringing.  You have two troop options, that being an infantry platoon and a veteran squad, each with advantages and disadvantages.  Now model wise they are the same, a plastic cadian squad can be veterans or part of platoon, it comes down to how you purchase them out of the codex.  That at least is one solace, there are no different model kits you will have to buy to bring the squads, though weapon options will force you too.

To build your basic core, one of the best and most rounded approaches I have found is to take a platoon and a veteran squad.  This fills your minimum requirements and gives you good options in terms of having a high quality unit and a larger one.  Generally the vet squad is going to have your quality weapons like plasma guns and melta guns as they can take 3 special weapons.  A heavy weapon can be good but really only if you are going with plasma guns as meltas conflict too much with a heavy weapon.  The squad is also very good in a chimera and should always be considered unless you want to be a dismounted army as a theme (which can be done).

While I have gotten started already, I will explain the basic stats of a vet squad for those that don't know.  They have the same stats as a guardsmen except they have BS4 instead of 3.  The base squad is 10 pts more but they can take much more options including 3 special weapons and doctrines, which can give you carapace, melta bombs and demo charge, and camo cloaks and defensive grenades.  They excell at shooting and eliminating priority targets and should be built with a specific role in mind like tank hunting, MC hunting, close infantry killing with heavy flamers demo charge and shot guns.  The point is they are better at being specialists rather than generalists like an infantry platoon.

With that, you want to build this vet squad with a role in mind to supplement your platoon and eventually the rest of your army as you get more.  The platoon on the other hand is how you bring a lot of models to the fight.  They can bring 2-5 infantry squads, 0-5 heavy weapon squads, 0-3 special weapon squads, 0-1 conscript squads, and 1 platoon command squad.  They have the special rule that allows the infantry squads to form into one unit, often called a blob squad.  So if you take 5, you can combine them all into one massive squad, or take one of 20 and one of 30, or two 20s and a 10, its up to you.  The point is that they are really flexible and can be quite durable.

As you are starting out, you should be looking at around three infantry squads and a platoon command squad (PCS).  The PCS is 5 guys, with the commander and 4 guardsman who can all take special weapons.  You don't get as much bang for your buck with the better special weapons with these guys though do to BS3, so your best weapons are flamers and grenade launchers, as they are cheap work reliably.  The grenade launcher is my preferred as you have better range and it has two rounds, one being a blast S3 AP6 and one a single shot S6 AP4.   A heavy weapon can be taken as well if you plan on keeping the PCS and Platoon relatively immobile, and here you want something like an autocannon, heavy bolter, or mortar, as these care less about BS3.  Lascannons are better in a large blob as the combined shots of multiples have better affect than the single shot out of a PCS.

The platoon itself is going to be built depending on how you want it to function, but for most cases these guys are going to be central and not too mobile so you are looking for ranged weapons.  Some of your best choices are again grenade launchers and autocannons, as they supplement each other and both have decent range, though the auto cannon will out range the grenade launcher and that's ok.

Unless you are building for a specific purpose, stay away from power weapons, they work well when you build a large unit with support characters around it, but not for being a generalist unit.  You will get more utility out of giving the whole squad krak grenades for 10 pts than one model better attacks for 15.

When it comes to deciding whether to combine the squads or not, that is up to you, but here its ok to do a 20 man blob and keep on squad separate or keep all 30 together.  If you are going for mech though, then don't worry about this.  Whether you combine them or not though you can still built them to be the same as you are looking for quantity of fire power.

You can take heavy weapon squads, now some like them and some don't.  I like them, but they are not must take either.  Their advantage is that they are separate from your infantry squads and force your opponent to choose to shoot between different targets, as well as having no wasted shots.  In short they are more efficient, but they are easier to kill as they cannot hide in a squad.  The weapons that work best for heavy weapon squads are lascannons and mortars, as it gives them freedom to target what they want and not have to worry about being tied to an infantry squad, plus with long range they can take good positions to mitigate being exposed.

If you are looking at going mech, your going to spend more in points, but you'll gain mobility and protection, plus the weapons of the chimera itself.  You'll want to try and supplement the weapons it has and here the autocannon works well, as well as a missile launcher.  What you'll have if you go this route is 5 squads in chimeras (or tauroxes), one vet squad with plasma/meltas to quickly move to deal with threats, three infantry squads to sit back and plink away early and move to key areas later, and a PCS to control the action and issue orders to any dismounted units.

If you are sticking dismounted, then an aegis line is almost mandatory.  It grants huge survivability and this is where the platoon is going to fight behind.  Whether you combine them or not, choose good position and cove and use them to shoot at range and then mass on weakened targets when they get close.  The vets still hang around to move on key targets and eliminate them.

The last part of your core is going to be your Company command squad.  If you are going armored this is going to be different, but other wise these are your go to HQ choice.  Basically same as a PCS but with veteran stats and the commander can issue more and better orders.  Generally speaking they are going to be there as a support unit with weapons thrown in.  You want a regimental standard to get leadership rerolls, a vox to reroll orders and then a couple special weapons or a heavy weapon of your choosing.  Here a lascannon works as their BS4 gives you better chances at hitting and generally the CCS is less mobile than the PCS.

Now there are a lot of options for a CCS and I really could go on and on, as I already have.  So check out the tactica for the CCS if you want to no more.  But suffice it to say, this is the core basis for your army to build off of.  You can add more platoons, more vet squads, tanks, scions, vendettas, wyverns, etc.  But this is where you want to start and about what it should look like to get a good balanced force that can deal with multiple threats and has survivability.