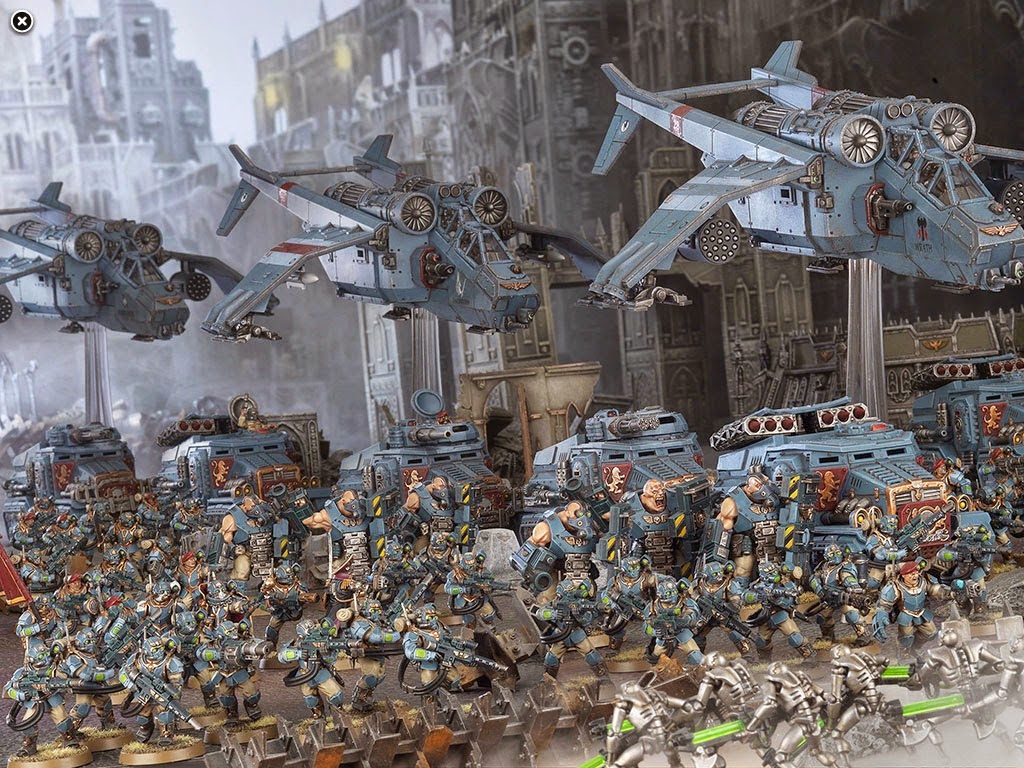 On to the final units of the Militarum Tempestus codex.  While these aren't truly units, I am talking about the Air and Ground formations that are available to the Tempestus Scions.  Both have some significant advantages and are quite good.  They revolve around the transports, one having valkyries, and the other tauroxes.

There are no specific points values, but each has required units that you must take.  For both you must have a commissar :(, Command squad, and 3 scion squads.  Each formation is then unique in that you must either take 4 Tauroxes or 4 Valkyries.  There is no mandatory requirement for unit size, weapon upgrades, etc, just that you have at least these units as a minimum.  So the minimum of three 5 man squads of scions, a 5 man command squad, and base commissar, plus required vehicles is all you need to start the formation.  You can of course expand the squad sizes and upgrade from there.

For taking these formations, you get some pretty significant advantages, though there are some restrictions.  For the ground formation, all units must start the game inside the transports, so the commissar is going have to be with a squad that can fit him in inside the taurox.  If you reserve them, the entire formation must be put in reserve, no half in half out, its all or nothing.  If you do reserve them they come on with one reserve roll, not for each individual unit.  The other bonuses for this formation is that on any turn that a unit disembarks from a taurox, they gain the twin linked and pinning special rules.  This is really great as you can save your orders for when you need them most as you don't have to worry about twin linking them, pinning is just a nice bonus if not amazing.

The air formation has similar rules as well.  The entire formation starts in reserve, and the squads must be embarked on the valkyries, so you can't deep strike with these guys.  When you roll to bring the formation on, its one reserve roll, which you can reroll.  As well as if you use grav chute insertion, you get to reroll your scatter distance when you do so.  Like the Taurox formation, whenever a unit disembarks from a valkyrie (including grav chute), they gain the twin linked and split fire rule.  This is another great bonus, and you are more likely to gain utility out of this than pinning.

From a simple points perspective, the air formation is the most expensive as the transport cost is higher, this can be restrictive as you'll still be needing a primary detachment for your army to fill in as well.  The air formation also has the disadvantage of having to start off the board, but with the reroll it is very likely to come on the board early.  It does have the advantage of survivability in that flyers are harder to knock down, and the troops are safe inside unless a crash and burn happens.

The air formation is really good, but there are issues in that it is going to be harder to make use of the bonuses for disembarking compared to the ground formation.  With valkyries being flyers, you are going to have no problem jumping out, but getting back in is the hard one.  You'll need to drop into hover for a turn in order to pick your guys back up in order to jump out again to get the bonuses.  This is much easier to do with Tauroxes as they are already on the ground.  This does not mean you'll only be getting one use out of the rule, but that it will require you risking your valkyries more in order to maximize its utility.

My main beef with these formations is that they require you to take a commissar.  No thank you please, can I just not take him, save the points for more weapons.  Oh well its not a huge down side and you don't have to give him anything other than what he comes stock with.  Unless you plan on upgrading your Tempestor prime with power weapons, I wouldn't bother with giving the commissar anything, and the lord commissar is really not needed in this formation, but if you want to upgrade then go ahead.

The great thing about both of these formations is that they give you rapid striking and hard hitting forces that allow you to hit the enemy where it hurts and have some great bonuses to make them even better.  Where these will really be useful is as an allied detachment.  For an IG player or other Imperial that wants scions and their mobility, this is a great way to do so, and you can keep the cost down by taking minimum squad sizes.   Also you don't have to worry about the restrictions that allies have.

Another way this can be used is to get more Scions into your army if you have need of more.  For me I personally just want more command squads, so I would more likely to just take a second CAD for two more, but the special rules are also very tempting even with commissar.

The Air formation should be used to perform a crippling alpha strike, move in and hit your opponents key area and destroy or degrade his critical units and carve out the heart of his army.  Now it is important to remember that the valkyries are not in a squadron, they may roll for reserve as one, but are individual flyers.  This is another great bonus as you can spread or focus your fire to where you need it most.  Drop all your troops, or most, on the key objectives you need and make use of split firer to damage as much as possible.  Once on the ground you will be open to return fire and close to the enemy, so it is critical to do as much damage to the most dangerous units first, allowing you to survive the next turn on the ground.

To support this formation, a good core of Taurox transported squads is really good.  The idea here is to hit your opponent with a one two punch, drop your guys out and death blossom, move the tauroxes and squads up to hit what survived, and valkyries drop pie plates over infantry.  The key to this formation working is mass, you need to get all of your units to concentrate and bring overwhelming force at the right time, doing too much damage for your opponent to recover from.  Then if possible, jump back in and fly to hit your opponents next key area, they should be fractured at this point and struggle to effectively counter, and by jumping in and flying away, their ability to concentrate on you will be mitigated.

For the ground formation, the same principles apply, but you can play a longer game.  This formation will work as a good skirmishing force early in the game, drawing your opponent in.  Have a few forward units to disembark and pin advancing forces (that can be), then mount up and fall back.  Draw them in and once they have advanced too far, concentrate and hit them with all your squads.  If done right, they will only have partial forces that have advanced and you can quickly overwhelm them and then mount back up, to either fall back or maneuver on their now weakend forces.

The key is to not be static and to make use of the pinning, use advance forces as skirmishers.  The rest of your army is there to anchor you and provide support.  Use this to your advantage and you will do well.

So there is a quick run down of the formations, at some point I will do an indepth of each one with tactics for each.