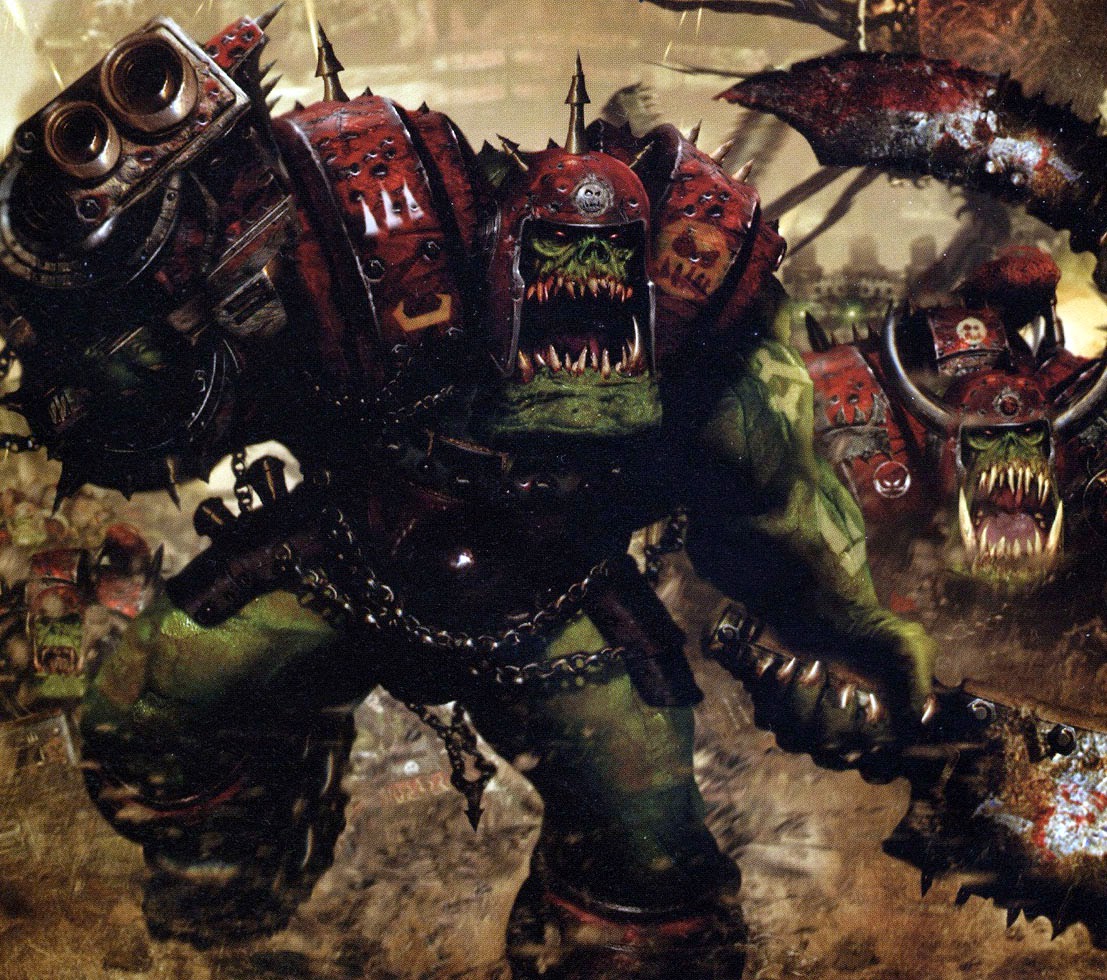 Ah the orks, a long awaited release that...is kinda boring.  Is anyone really talking about orks?  It seems the occaisional post surfaces, but god its been so long since the first pics hit about a month ago.  Now though I am an IG player, I have a special place in my heart for these crazy bastards.  Mostly because I like killing them :).  But I have always wanted a large ork harley biker gang, and there is just something iconic about orks and 40k.  That is why this release seems to almost be depressing.

I know GW is trying out different release schedules to see how it works and what doesn't, and I can't really fault them for that.  Unfortunately you have to try things out to see how they work, its just unfortunate that orks are the test bed for this one, as its just so blah.

Mind you, the rules don't seem bad, from what has leaked.  Doesn't look to be anything crazy but will most likely be a pretty solid codex, if not an eldar.  The problem is that we don't have the whole picture and its important, as all those things interact with each other to create the whole, and with only snap shots its hard to accurately gauge.

I really hope this release proves to GW that while they may be a model company, rules are really important too.  Now I don't mind how they have released new units with rules in the WD a week or two before the codex.  Its fine, it whets the appetite when done right.  But this has just been such a long release.  Why!?  I know orks need a big update, but c'mon, one model a week for a month, and then finally the codex.  Its agonizing and I have found it really hard to maintain any real interest.

Models pics released on internet "oh that looks cool, any word on the rules? Nope, on to something else"  A leak comes one day, but its really hard to maintain interest after a day or two and then back to a week of waiting for some other little tid bit.  And its  a release I have really been looking forward too.  And I can't keep interested.

The codex luckily will FINALLY be out this weekend so thankfully I will be pouring over it with my brother once he gets it.  And my hopes are not too high, I am expecting a codex that is solid and will work but won't be just TEH AWSUM! either.

So please GW, release the codex earlier, its far easier to be excited about models after the release.  Or if you are going to release models before, do the ones that everyone wants, like fucking koptas and buggies, those are the same models that were around when I STARTED playing 40k.  Yeah flashgits and a new made up model (orkanaught), sure the mek guns are cool, but why not include the kannon and lobbas?  Granted most ork players don't give a shit because they'll just grab a random gun and call it a day and its ok because orks.  If your intent is to get people buying models, then release the long wanted and awaited redo's of ancient models, cause I guarantee if new koptas or warbuggies had been released in week one or two, they would have been hard to keep on the shelves.

Oh well, hopefully this is not going to be the standard practice and I am really not worried as GW seems to change it up every time.  Other wise I am hopeful about the ork army themselves and looking forward to cleansing some greenskins.