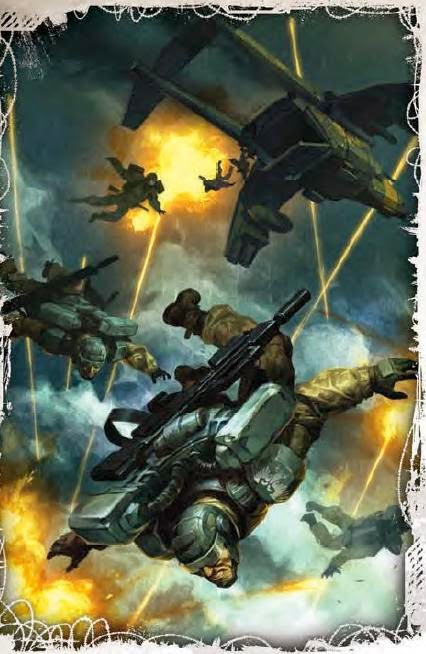 The Scions only have access to one aerial vehicle, and that is the valkyrie.  Because of this it is very important to not only use them, but to use and equip them correctly.  For the scions they bring needed firepower and mobility, getting them safely and quickly to the fight.  There are certain roles that the valkyrie excels at and others it does not.

Off the bat you have a flyer that has a multilaser and some useless hellstrike missiles.  They are useless because they are ordnance, so you can fire one at BS3 and all other weapons at BS1.  With a 50/50 chance at hitting, those are really crappy odds.  So you will replace them with multiple rocket pods, because they are awesome.  For ten more points you get two large blasts that are S4 AP6 and 24" range, which is no issue on a flyer.  Interestingly, heavy bolters are cheaper in tempestus than the AM codex, so I recommend taking them, they are useful for when you have infantry with a 4+ save or worse, and the MLs is still useful for vehicles and higher T models that you weren't going to beat its armor any ways.

There is an option to swap the Multi Laser for a lascannon, its not expensive but again its a BS 3 vehicle, which hurts one shot weapons.  If you are wanting to take them, you need to take them across a whole squadron to get any chance of success.  Otherwise you will have only a few hits.  Its a good choice as well, since a flyer can only fire 4 weapons, so with two heavy bolters and MRPs you can deal with infantry just fine, but still have something to deal with tanks and high T units if you need to.  But it is an all in sort of deal, so if you are taking one, you are taking it on all of them in the squadron.

The valkyrie importantly has extra armor.  This counts all crew stunned results as shaken.  This is really important with the changes to the damage table and how it affects flyers.  Since immobilized results count as crew stunned on a 3+, the valkyrie will never lose its maneuverability, though it will still have to shoot snap shots.  A small but important boost with the edition change so don't forget.

Valkyries really go together with scions like Peanut butter and jelly, with grav chute insertion and the scions have move through cover, they can drop out and not worry about dangerous terrain tests if they scatter.  Honestly this is one of the few times you can spam something and not feel guilty about it.  Valks are good but by no means over powered, they are a transport with good anti infantry capabilities, but they certainly don't remove units with ease.

As squadrons, they work well in pairs, so you can spread valks out and not have to have them all in one squadron.  Threes work fine, but I know most don't have 9 valks sitting around to go full air borne.  If you can field 4, then you are in the right zone, as they can deal with a lot of threats through weight of fire, and transport your army where it needs to be, and with maelstrom missions this will be crucially important.

Since they are not dedicated transports, you have the flexibility of putting units in that will compliment them depending on the army you are facing.  Often you will want to put a melta squad inside.  The valks get them to the fight and they jump out to kill a tank while the valks deal with troops.  They compliment each other well and can deal with just about any threat.  Monster hunter unit like plasma command squads are great as well, they can jump out and assassinate what you need dead.  Other wise you can put one of your line squads to get in close where they need to be and onto an objective.

The key to remember is that valks are not the spotlight, your scions are.  They are simply there to get them where they need to be and support them once they have jumped out.  If the choice is between saving a valkyrie or a scion squad, let the valkyrie die.  And on that note, don't be afraid of going into hover mode if you need to.  If a squad is going to die and give up a VP, drop into hover and pick them up, you can still jink and if you use cover well, you can stand a good chance of surviving.  It takes practice, but valks can enter hover mode when you need them to and not die.  Plus if they do go, the guys inside do not take S10 AP2 hits as well, so that is something.  When you need your guys to actually disembark and be able to move, its a good option to have.  Though grav chute insertion will serve you well most of the time.

With scions short ranged weaponry, the valkyrie like the taurox, gives them the speed and protection they need to get to the fight.  Scions do not do well at long range plinking contests, they need to get close and unload with their effective weapons.  The valk is here to get you there, and importantly, to bring your troops massed on the targets you want.  Use them to target weak spots in your opponents line, multiple squads and valkyries bringing overwhelming force to defeat your opponents army piece by piece.  Scions do not hold the line, they break the enemies.

Valkyries are a mainstay and you should include a couple, if not more into your tempestus force.  They have mobility and firepower.  They are relatively cheap and require only a few upgrades to get the most out of them.  You can certainly go all in and have an entirely airborne force, and will do well with it.  Scions are meant to be falling from the sky and taking objectives from your opponents cold hands.  Remember to match the squads inside to the role you need them to fulfill.  Often having a few tank hunters and monster hunters will be what you need most, as they can have a hard time getting close to the targets you need to kill.

They are a great unit, and while the vendetta has a lot of attention, the valkyrie is just as good and serves well in the role it is meant for, transport and infantry hunting.