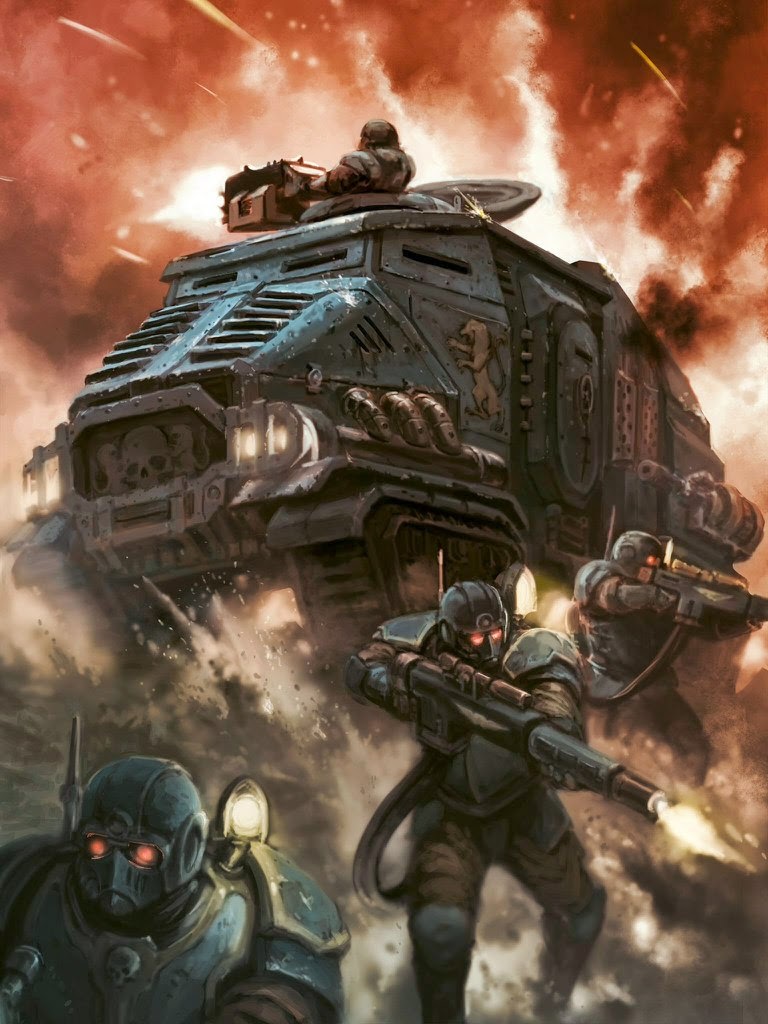 To continue with my theme of Scions, I will be discussing some more tactics for the Tempestus army, more specifically on their transports the Taurox Prime.  Its a great vehicle that has impressive shooting for its size and great mobility.  It keeps your troops inside alive, and with embarked troops having more buffs than before, they are even better now.

Scions themselves are great, but the thing that they lack is long ranged firepower.  This is where the taurox comes in.  It has options for multiple long ranged weapons that is coupled with mobility and reliability in terrain.  To start with the basics, it is a BS4 fast vehicle with AV11 10 10 with 3 HPs.  It is not the toughest that is to be sure, but there are ways to mitigate that.  BS4 is really good on this vehicle and with all the weapons you are firing you will be hitting a lot of the time and doing damage.  It being fast means it can move 12" and shoot 2 weapons at full BS, since that is what they have unless you buy a heavy stubber or storm bolter, this is perfect for them.  This also means they can move flat out 12".  Other important rules is the all terrain vehicle, which allows you to reroll dangerous terrain tests if failed, chances of rolling two ones in a row are low.  It will happen but not often.  Other important things to note is that it has side hatches and two fire points on each side.

There is an important thing to take into consideration with moving flat out.  A vehicle cannot move flat out if troops disembarked after the transport moved. So you cannot move 6, disembark the troops, then flat out in front of them.  If they disembark before the transport moves, then there is no restrictions to moving flat out.  If you plan on using the taurox as a shield for your troops this is important to be aware of.

Starting out at 80pts for the battle cannon variant, the taurox increases in cost from there.  The gatling variant is 10 pts more for a 10 shot S4 no ap 24" gun.  The missile launcher variant is 20 more than the battle cannon variant for a 2 shot missile launcher.  It comes with twin linked volley guns that can be traded for TL'd autocannons for free.  On the base and missile launcher variant the auto cannons are better and the volley guns are good for the gatling variant as they synergize well together.

I arleady covered some basics on list building and which to chose, but to reiterate, the ML variant is your bread and butter.  It can deal with heavy vehicles (though only AV14 when you are lucky) and is very good against light to medium and can still put out two blasts against infantry.  The battle cannon variant is good as well and can deal with infantry and light vehicles with the occasional glance or pen on medium.  Autocannons synergize here giving your three S7 AP4 shots, one being a blast.  Having a few here to round you out is good and having the high S blast gives it an edge over the ML when dealing with infantry.  The gatling variant is good with dealing with horde units with T4 and below, it is the shortest ranged variant so keep that in mind, generally only one or two are needed.  Heavy stubbers are great on both as they give you extra shots and more S4 fire power in addition to a well ranged weapon.  The storm bolter is ok but I rather have the extra range and shot, SB on the gatling would be the only one I would take it on, but even then having one weapon with extra range means you hit something almost every turn.

With the tempestus codex, you can bring tauroxes as either transports or fast attack.  You should bring a couple as fast attack choices for a few reasons.  The first and most important is flexibility, as non dedicated transports, you can choose who you want to start in the vehicle at the beginning of the game, where a dedicated transport can only start with their assigned squad.  You can move squads around based on the needs of the game and it is useful.  The second is simply to be able to bring more than you have squads to assign tauroxes too.  Generally I like bringing the ML in the Fast slot, as most squads will be able to work well with it, though the battle cannon variant is another good choice.

On the battlefield, tauroxes work very well when used right.  Two of the three variants have 48 range and as such work great as skirmishers early on in the game.  With no restrictions to moving and shooting, keep them on the move, going from terrain to terrain to pick apart your opponent.  You have to use terrain as much as possible.  Without it they are vulnerable in the open and can only take so much damage.  The big threats are high volume of fire weapons that excel at glancing to death.  With the new edition one shot weapons are not as effective and as such you need to focus your fire on vehicles like wave serpents early and dealing damage to them.  Shaking or stunning them is still very effective and don't worry too much about destroying too many out the gate, you need to degrade their effectiveness while keeping yours.

The game you want to play is essentially keep away.  Stay at range early and use long range shooting to hit key targets early.  You want to force your opponent to move towards you, draw them into your trap for the waiting scions in your tauroxes bellies to jump out and deal the killing blow.  Keep the tauroxes in packs, generally three works well.  They can provide cover for each other when needed and when one is wrecked the other two can use it block incoming fire.  Don't fret too much over losing tauroxes, most times they will be wrecked and become terrain for you to take advantage of.

Once you have degraded your opponents effectiveness and drawn him in, that is when you strike.  Mass your taurox groups at critical areas and objectives, bringing overwhelming numbers of scions and tauroxes together to take your opponent out of the fight.  If you are successful your opponent will to be fragmented for his remain forces to resist effectively.

Key principles are using range to advantage.  Use terrain to increase survivability.  Use mobility to ensure targets are in LoS and range and keep away from dangerous units.  Have multiple tauroxes support each other and concentrate fire, and mass troops when needed.

The taurox is a great unit when used right and brings needed firepower and mobility to your army.

GG
Posted by Grumpy Guardsman at 10:51 AM