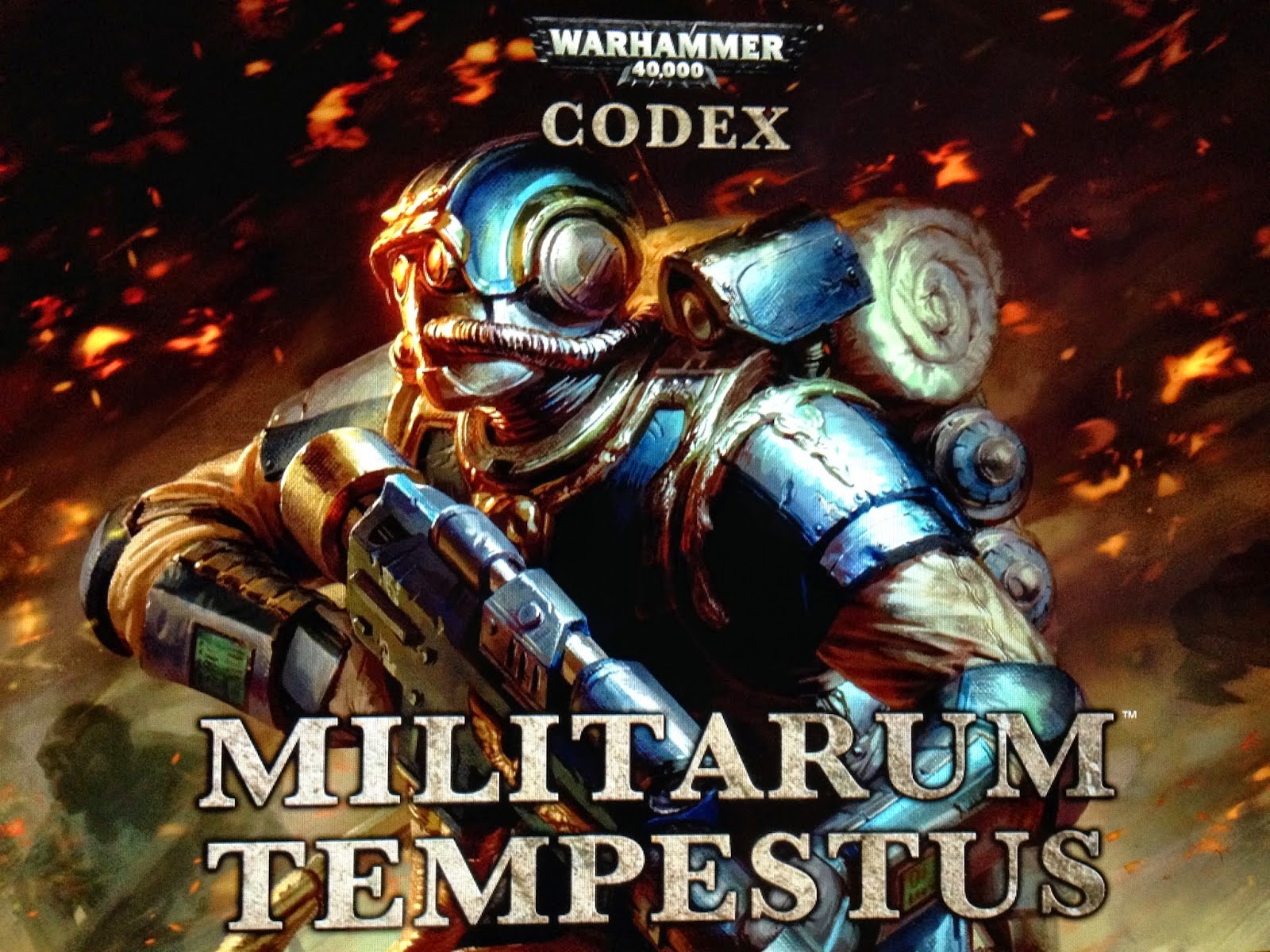 I want to go back to look at the Codex, having spent a few months playing with it and with 7th changing things.  Playing with it, I have come to the conclusion that it is a good codex that is a lot of fun and more than capable of holding its own.  That being said there are some misses that would truly make this a great codex and army.

The fluff of the codex is actually quite good, unlike the Astra Militarum codex which just comes off as a streamlined (not in a god way) retread of the previous one.  The stories and history of different regiments are really fleshed out and you get  a great idea of what the storm troopers/scions are, which has never really been looked at so deeply before.  The battles with accompanying stories really are great and its something that I wish was done more in other codexs.  I have gone back multiple times to reread it and that is a good sign of a well written fluff of a codex, if you keep coming back for more they have done a good job.  So this was really hit right on the head in terms of the fluff of the codex.

Rules wise it is simple and works well that way.  You have the Scion units and all the rules are there, and with the FAQ fixing the issues there is no issue with things not working.  The orders are great and are what make this codex different from AM scions, and really make the case for bringing them out of the book.  Though you only have a few units, the orders bring them over the top and ensure that your humble scions with hot shot lasguns can deal with almost any threat.  This is what was needed to make this codex successful as a standalone, with out access to all the AM goodies, the scions have to be able to pull their weight, and they do more than capably.

The term that I think best describes this codex is focused.  It gives you just the options you need and doesn't stray to far into esoteric things.  Every unit is playable and works to make the army better.  While commissars suffer for simply not being able to give orders and the lack of significant access in the book overall, they become a sub par choice, though as a unit in a vacuum they are still quite good.  The Tauroxes and valkyries that accompany the scions work perfectly to supplement and support your scion squads, it is their combination that make them really good.  In the AM book they aren't necessary and suffer from having to take points away from other good units.  Here though they shine because they work so well with scions and because you don't suffer from unit overload.  The points you spend are never going to wasted in a situational unit that will only be useful against a few things.  In this respect the codex is also a success, but there are downsides that prevent it from being great.

The first really comes down to lack of order givers.  Sure in 7th you can double, triple, etc CADs, but this shouldn't be necessary.  A single added rule would change this and fit with the fluff behind the army, and that is senior officer.  The command squads should have this rule, and since you can only take them as HQ's, you are severely limited here as even with two you still only have two orders.  Having senior officer would fix this, it would mean you could rely on one command squad if you wanted to and still have two very useful orders, and two would give you great flexibility.  Note they really don't need special orders, just the ability to issue two.  This would fit the fluff better as well because in this setting they are supposed to be acting as a Scion regiment/unit, not the detached task forces that are seen in AM armies.  Think of it this way, in the fluff the scions you see working in concert with the Imperial Guard as small strike forces that are spread thinly, and these would be platoon level commanders.  In Tempestus, they are essentially regimental commanders overseeing the majority of their regiments in single actions.  This should be reflected and makes a lot more sense.

Another way this could be addressed is giving the scion tempestors in normal squads the ability to issue one order to their own squad ala Sgt Bastone from the 5th codex.  Have a limited selection of orders and they can only be issued on the squad with no rerolls ever allowed.  This would also fix some of the issues that they have.  Not a necessary change but its also fits in the fluff in how it mentions how order driven the Scions are.

There is some depth missing in scions as well.  While the normal squads are fine and the command squads are good as well, I think there are some additions that could really make this codex feel even better, and nothing that would be really broken.  Relics/Heirlooms or whatever you want to call them would really be great, all standalone codexs have them and having them here would be a great step, and there are even relics mentioned in the fluff of the book (a special powerfist is mentioned) and would give a nice depth to the scions as a formation.

The other thing and it ties into the issues with the command squad, is that it should be similar to a CCS in AM rather than a PCS.  Really a regimental standard is what would be great, a platoon standard is poop as its only usefulness is in close combat, which we all know is what scions are great at.  Some sort of regimental advisers would be great here.  An astropath should not be included as psykers are not there thing, but some version of a master of ordnance or officer of the fleet would really fit in well.  They could be tweaked to do different things, but it fits in well with the fluff in how closely they work with the Imperial Navy and also, they really should have some regimental specialists.  They could have something like a naval fire coordinator, where you could fire and orbital shot (choose some sort of artillery profile) or have an intercept reserves option, essentially you choose whether to target ground forces and have direct fire assets or target oncoming units and have that work.  And this is just me spit balling but something that gives a good feel that this is a fleshed out unit and has greater access to things that their smaller formations attached to the imperial guard do not.

So while the rules are good and work very well, there is just a feeling of something missing with the army.  It has no big issues or handicaps, but the lack of orders really hurts it in some ways that prevent it from really being a great codex.  Overall it is a fun army to play and can take on a lot of armies and win, but its going to be a tough fight and it is unforgiving, mistakes will cost you severely.  This wouldn't change with some of the proposed changes, it would just make they army a little more forgiving and not punish you so harshly if you issue the wrong order or simply just run out.

Going forward I really hope that GW continues to support this army, and while it may be years, that it gets a new codex down the road as well and is not a simple one off codex that never gets anything more than an FAQ update now and then till eternity.  I would love to see some of the above changes implemented even if its not what I want, just some fleshing out and giving the army more than just the same units with different orders.  I would also love to see some taurox variants that are special to them, and even a valkyrie variant that only they can take, that would really make me happy and I think is in line with what the army is.  These could simply be something like a artillery variant, something as simple has having the griffon heavy mortar in the back and make it opened topped.  Could even be something like a special assault variant.  The valkyries could just have a additional options like auto cannons as weapon upgrades, or even something like a special warfare variant that could have some really cool support abilities but not the firepower, or a long range shooting variant that has a bunch of HK missiles and missile lock, but can only use them in hover mode as it has to be stable to fire them accurately.  Something that adds the cool factor but isn't crazy good, and would be something that a unit like the Scion regiments would only have access to.  Also please let missile tauroxes have access to flak missiles as an upgrade, that is something that is sorely missing as valks are only ok at anti air and even then only in numbers.

Its a great army still and I love playing them.  It has the tools it needs and nothing more, but I feel the more is what is missing that would make this great.  Even an elites choice for some special scion squad that can take some special gear or weapons, or has a special role.  Another thing that I have yet to really talk about is that with 7th, this army is actually much better simply for objective secured and the reroll on warlord.  For some armies this isn't a big deal, but for scions, having a useful warlord trait goes quite a long way, and added to that your scions squads are all going to be holding objectives and taking them from non objective secured units.  This gives them a great advantage that they previously did not have.

In summary its a good codex that hits all the marks for fluff, does a good job in the rules but is just missing a few things to really make it great.  My hope is that somewhere in the future (prob a while) that they get an update that fleshes them out.  A good thing is that they are one of GWs top sellers, so I think that will go a long way to giving GW the incentive to do just that.