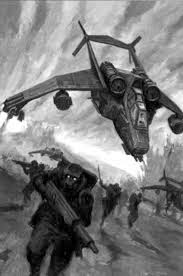 So a lot has been leaked the last few days, looking like someone got a hold of the next white dwarf.  It looks to pretty much have all the rules for the new storm troopers as well as Taurox.  Now there may be more to see that has been yet to leak.  It is time for a dose of reality though, just to make sure we are not getting too many hopes up, even though things are looking to be good so far.  So I am going to cover my thoughts on what the Tempestus Militarum codex is going to be, note this is not the main IG book.


Well the short of it is, expect the Inquisition style codex.  What do I mean by that?  There will be a single HQ choice, most likely just a buffed version of the Tepestus command squad that can be taken on its own.  Then there will be the militarum tempestus platoon.  That will most likely be an elites choice, similar to inquisition, where if you take Tempestus as primary they count as scoring units.  You'll have the dedicated transports and maybe the valkyrie thrown in there if they are feeling generous.  That will most likely be it.

Now if you feel that is a money grab and not enough for a codex, good news!  Its all looking to be in the white dwarf, so if you want the rules to use it, pick that up instead, its $4.  However if you are looking for background and fluff and artwork as well as the rules (me) you have a full mini codex at your disposal.  So its really up to you.  You don't have to buy it period and GW is at least publishing the rules in white dwarf, or hell you could print it off of the internet, its fucking everywhere already.

The little extras that are missing right now are the little extra wargear tid bits ala relics and warlord traits.  For Tempestus I'm expecting the warlord traits to most likely mimic some of the special rules the old storm troopers have (d3 units can infiltrate, reroll deep strike, d3 units scout) things along that line as well some other new ones for sure.  Wargear will be interesting, but most likely there will be some special gun, armor, standard, maybe even a vox, another gun or armor.  The relic wargear is something I am really interested to see how they do,  I don't see anything too crazy but I could see a special standard as well as some sort of super carapace armor as well as amped up hotshot.

Now orders are the other thing, its rumored Tempestus is supposed to have 6 of its own, with first rank fire being one of them.  Now this is a rumor and nothing has been actually seen yet so I'm hesitant to say for certain.  Personally I see little changing in the orders themselves, but I could see the orders mechanic being tweaked a little, as well as 'special' orders being added, one use orders similar to how tau have one use powers and such.  I'm more thinking order's like creeds becoming available to other officers, but only one use only.  Don't really expect anything to crazy from what we have already seen, I doubt GW is doing an over hall of orders completely, just based off of the last few codex's.  The one thing that is rumored is first rank fire working with Hot Shot's.  If this is true, that actually is pretty huge, even if the range of hot shots are not changed.  Now lets wait and see as its not confirmed and it seems like one of those too good to be true moments, I'm sure many remember all those amazing rumors about tyranids before they dropped.

So in summary, Tempestus is going to be a Command Squad and Scions with transports and maybe valkyrie.  Warlord traits will focus on special abilities for the detachment, with most likely a few situationally worthless ones like just about every warlord table.  Also wargear will have the usual special close combat weapon, gun, armor and standard plus a few other minor things.  Orders are going to be similar if not almost exactly the same, with most likely a few special ones for the detachment commander/warlord.  So if you were expecting Tempestus to have a bunch of IG units in them, your setting yourself up for disappointment so start getting over it now.  I am personally liking the way tempestus is looking, though I will pick up the white dwarf before I decide on grabbing the codex, as it will most likely only have the warlord and special wargear in it.  See if the codex is worth picking up in its own right.  Now this is not the main IG book so no word exactly what effect Tempestus is going to have on them.  Based off what we have heard and seen so far, its looking to be pretty decent, whether you like all of the models or not.