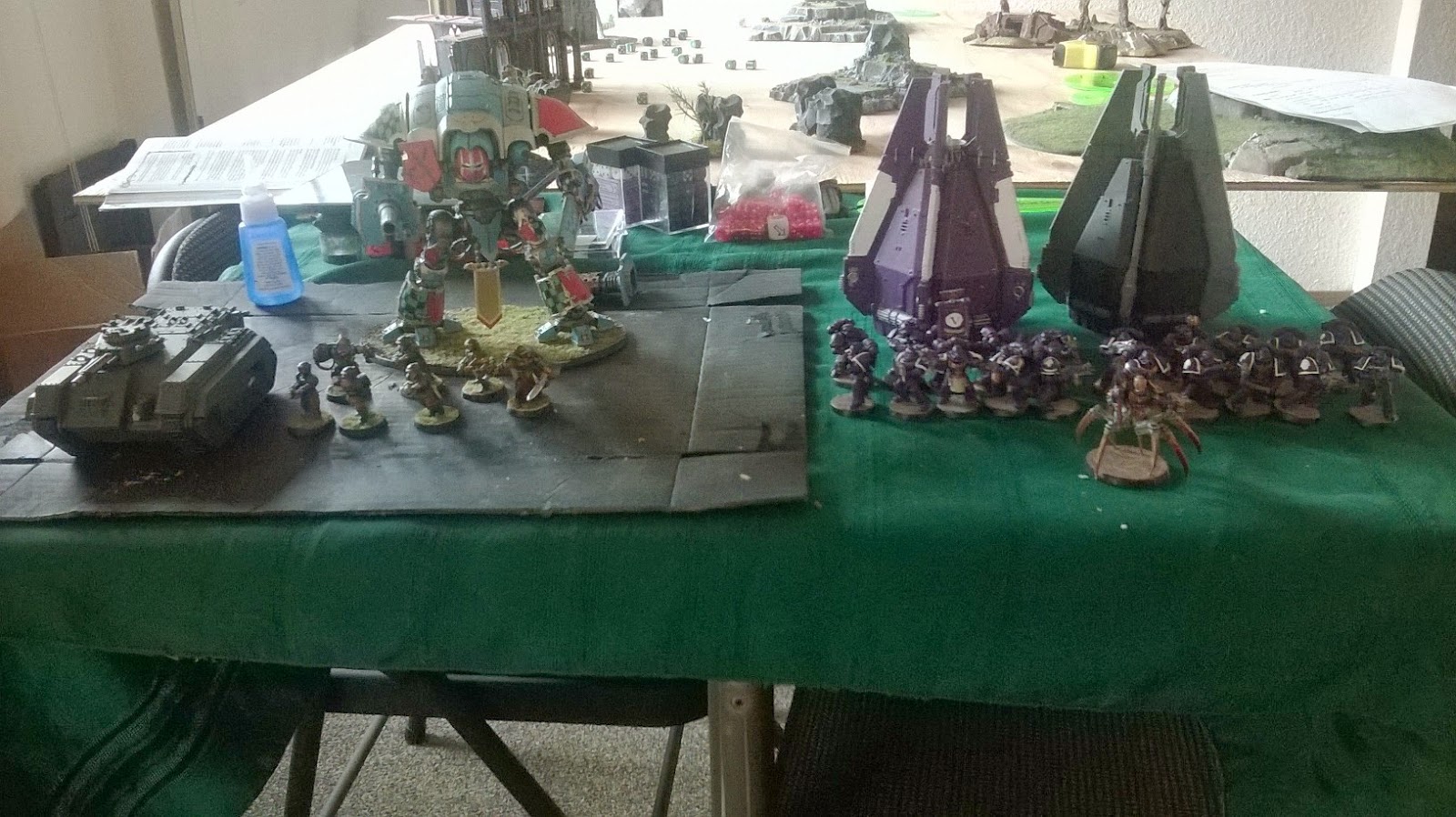 So here is game 2 & 3.  I kept the same list, my brother brought two tac squads in drop pods with meltas, and a librarian with drop pod to get the two tacs in round one.  We got the scouring for mission with dawn of war deployment.  I got first turn.  He failed to seize.  I deployed in the corner, he had his libby in his behind some terrain. 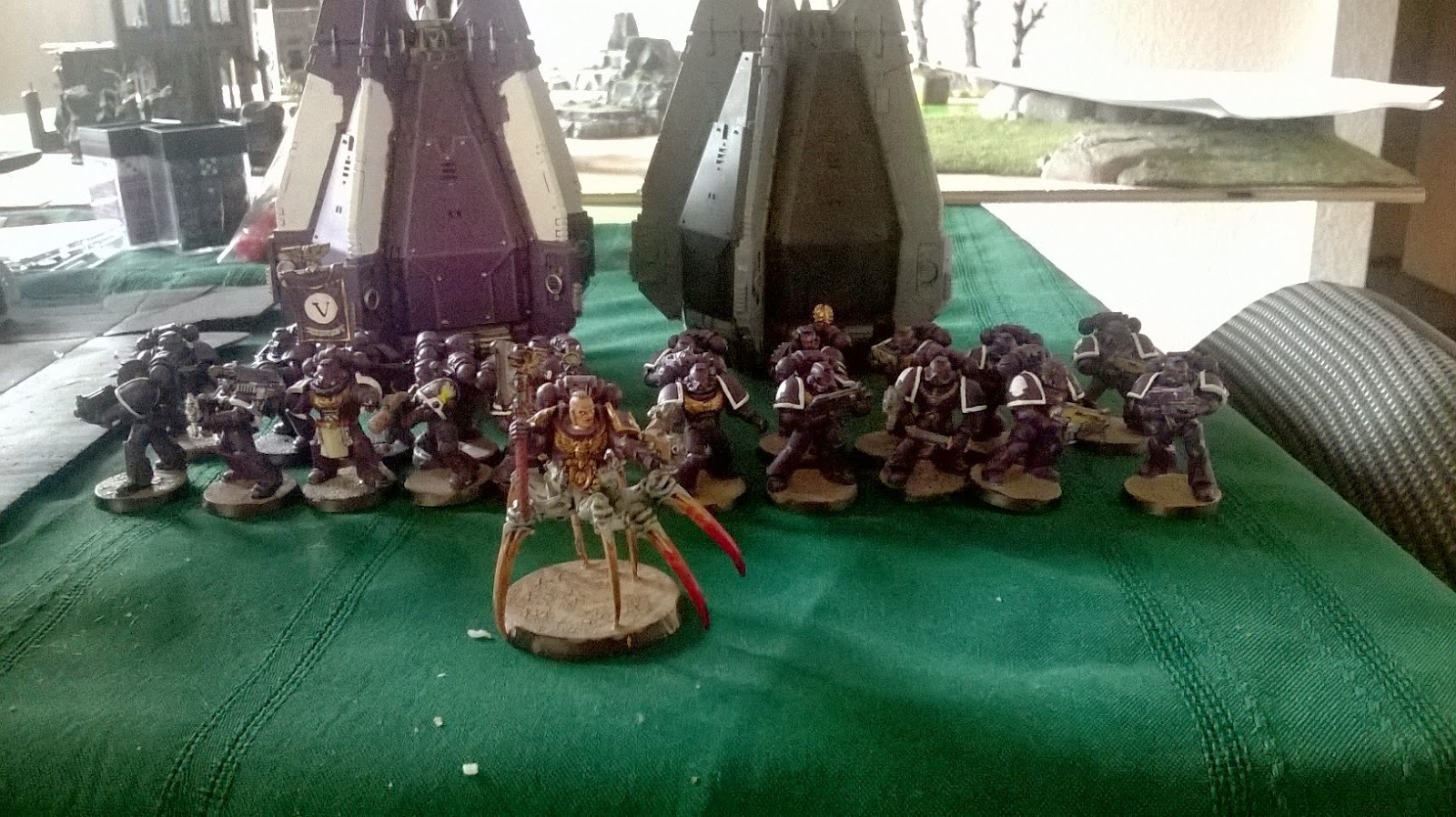 First turn I took out the libby with the heavy stubbers, he had some bad armor saves, and his bad rolling would be a mark for what was to come.  His turn he dropped in, combat squaded and surrounded the knight and troops.  He opened up and knocked 2 hull points down off of the knight, failing to roll a 4+ for his meltas on the penetration chart.  He did not roll a 4+ the whole game.  Forgot to fire the drop pods at the troops, which may have made a difference, they had cover but who knows.﻿ 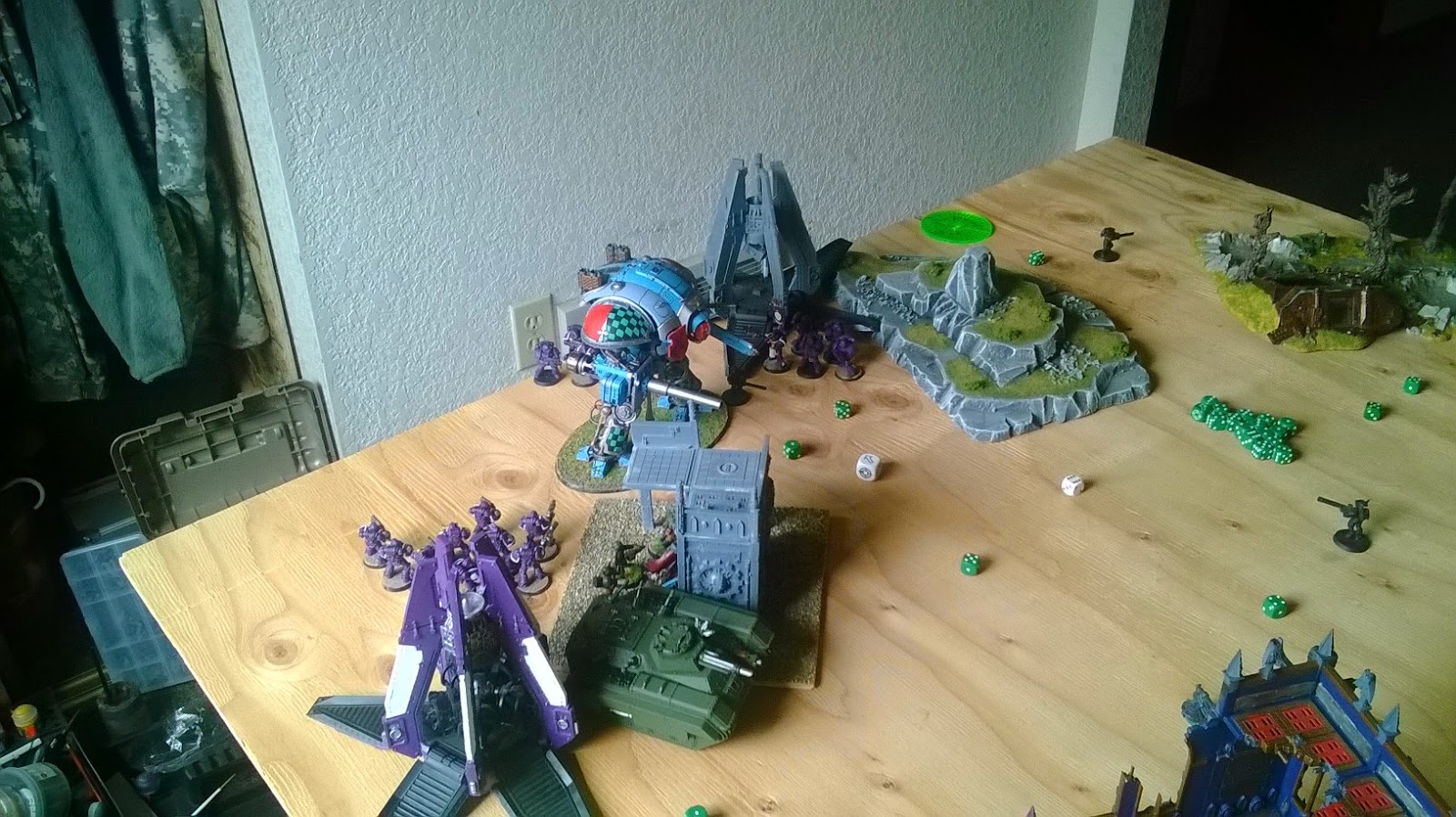 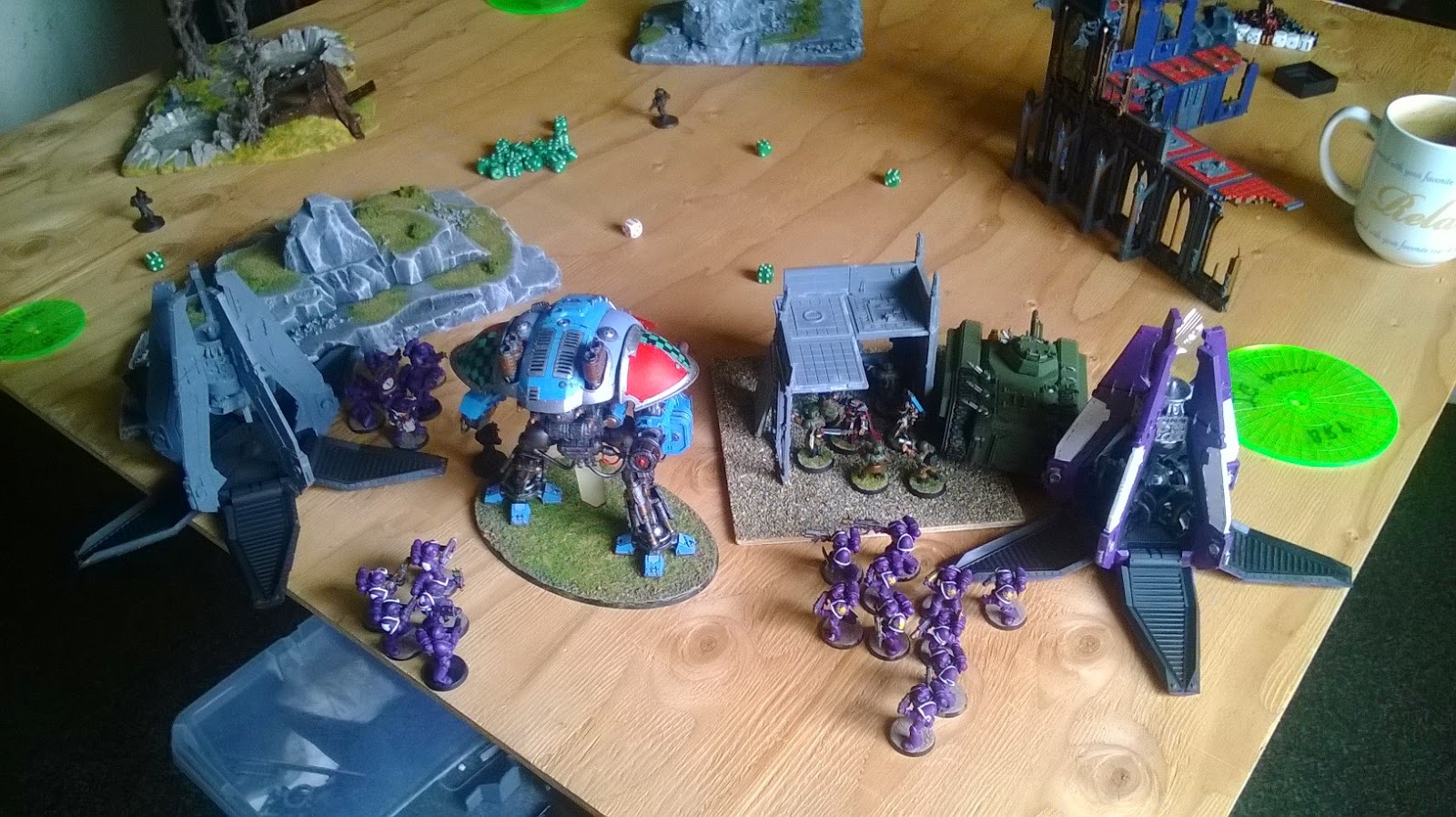 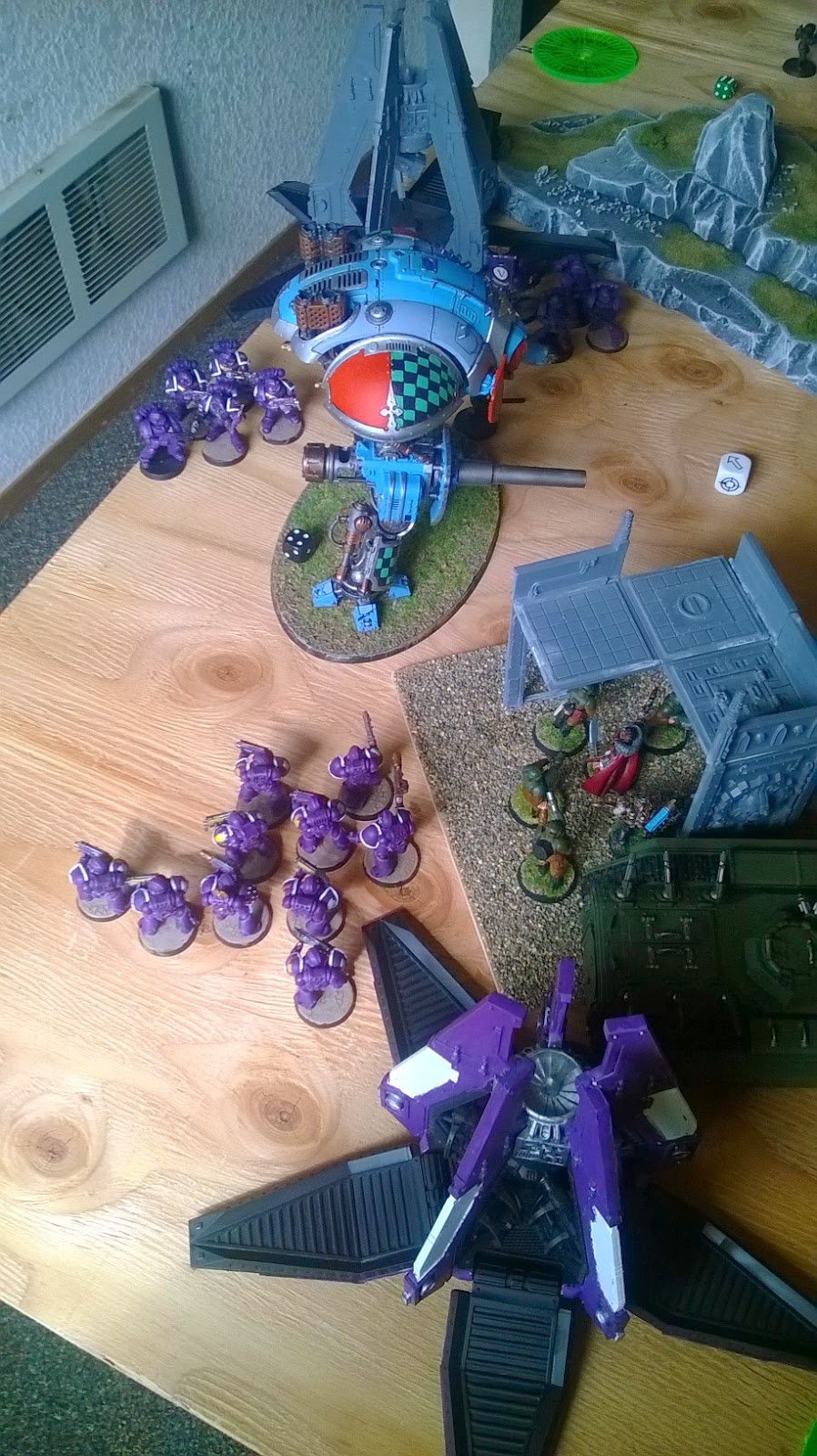 The knight then proceeded to return fire and with the help of the chimera killed all but one of the second tac marine squad, with the melta gun surviving.  The plasma cannon killed three from the other combat squad, importantly killing the sgt, who had melta bombs.  So he had two melta guns left.﻿ 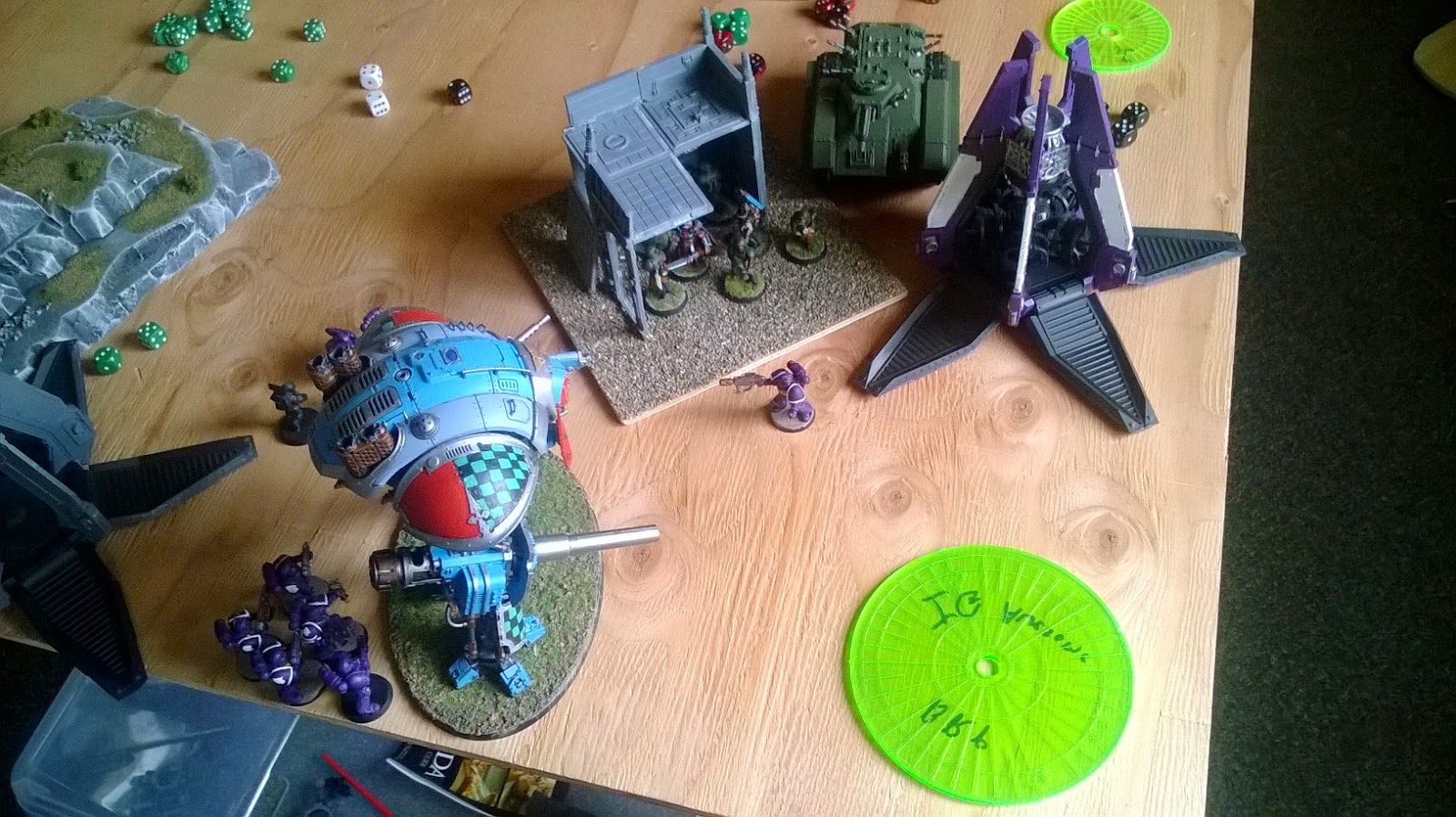 His turn he opened up again, both meltas got through as well as a krak grenade.  As before he failed to roll a 4+ on the pen chart and the knight was left standing with one HP.  That was game.  This goes to show that if the dice do not favor you, really isn't much you can do.  The knight should have died, with 6 melta shots hitting him in 2 turns from multiple angles.  He had plenty left to deal with the few henchmen and even with the knights explosion it had a very good chance of scattering off the board.  This really should have been a victory for him.  He made mistakes with model placement, the main one with his Sgt being upfront, losing him the critical melta bomb.

Next game he brought out the necrons to see what they could do.  He brought an overlord in command barge, the big destroyer ark or whatever its called and ten warriors.  The wraith counts as his commander.  We got annihilation for the mission with same deployment.  I won the roll off for first turn, but I forgot to go second, error on my part. 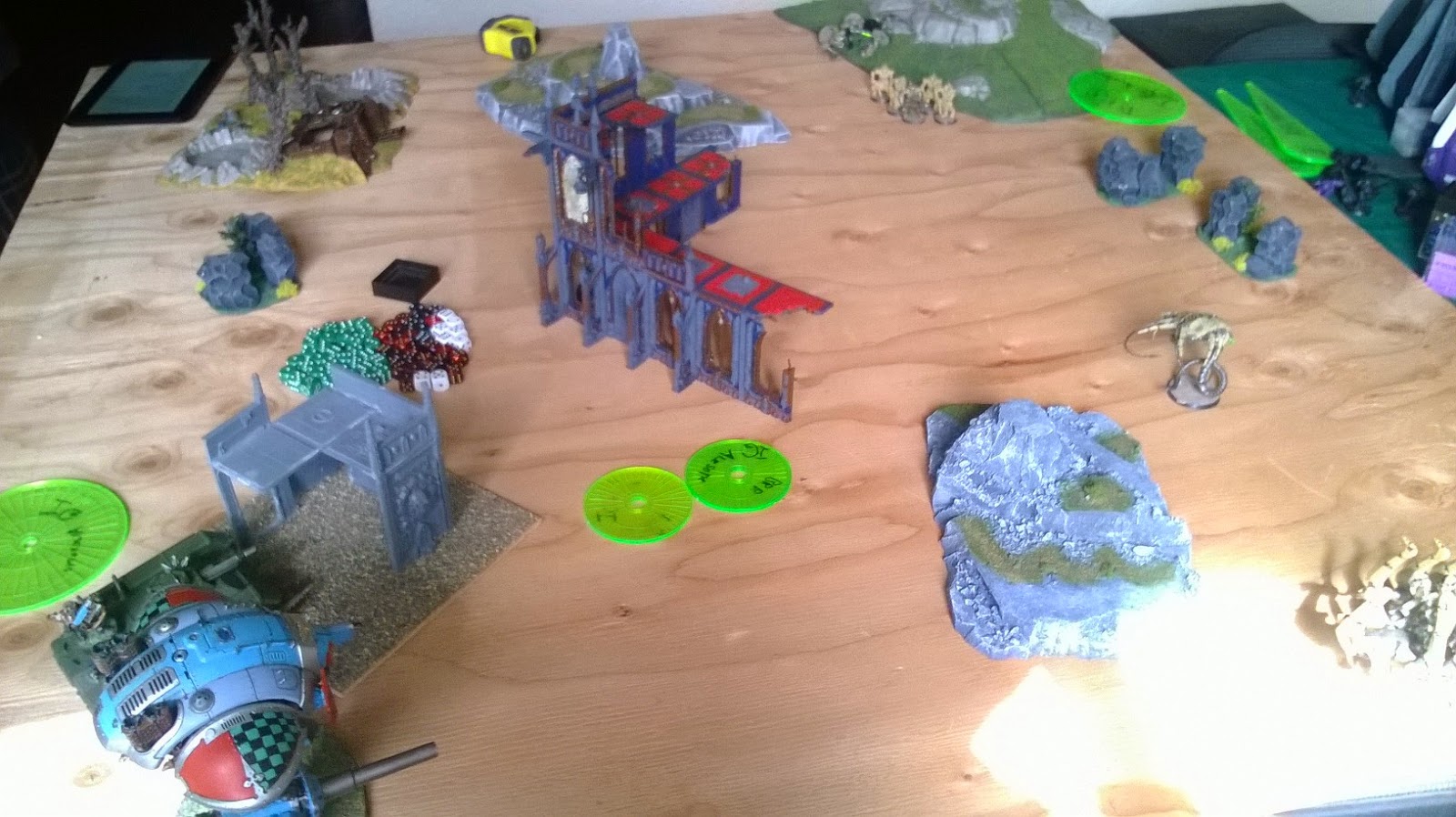 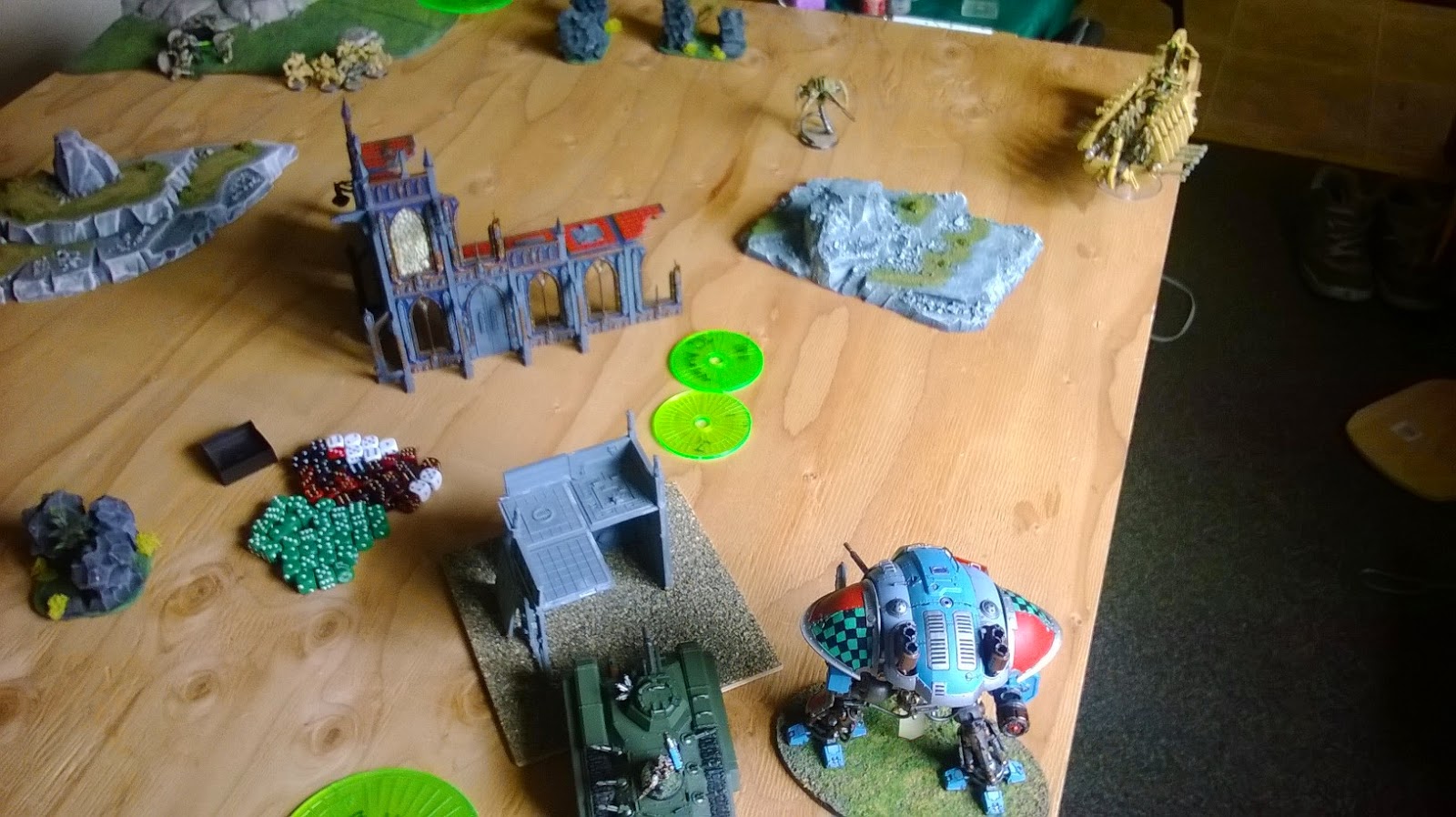 I moved the knight up and kept the chimera in place to shoot the plasma cannon.  Fired the battle cannon and was able to glance the destroyer ark, taking away one hull point but not getting through the quantum shielding.  Plasma cannon did nothing.  Heavy stubbers knocked down two warriors but they both got back up. 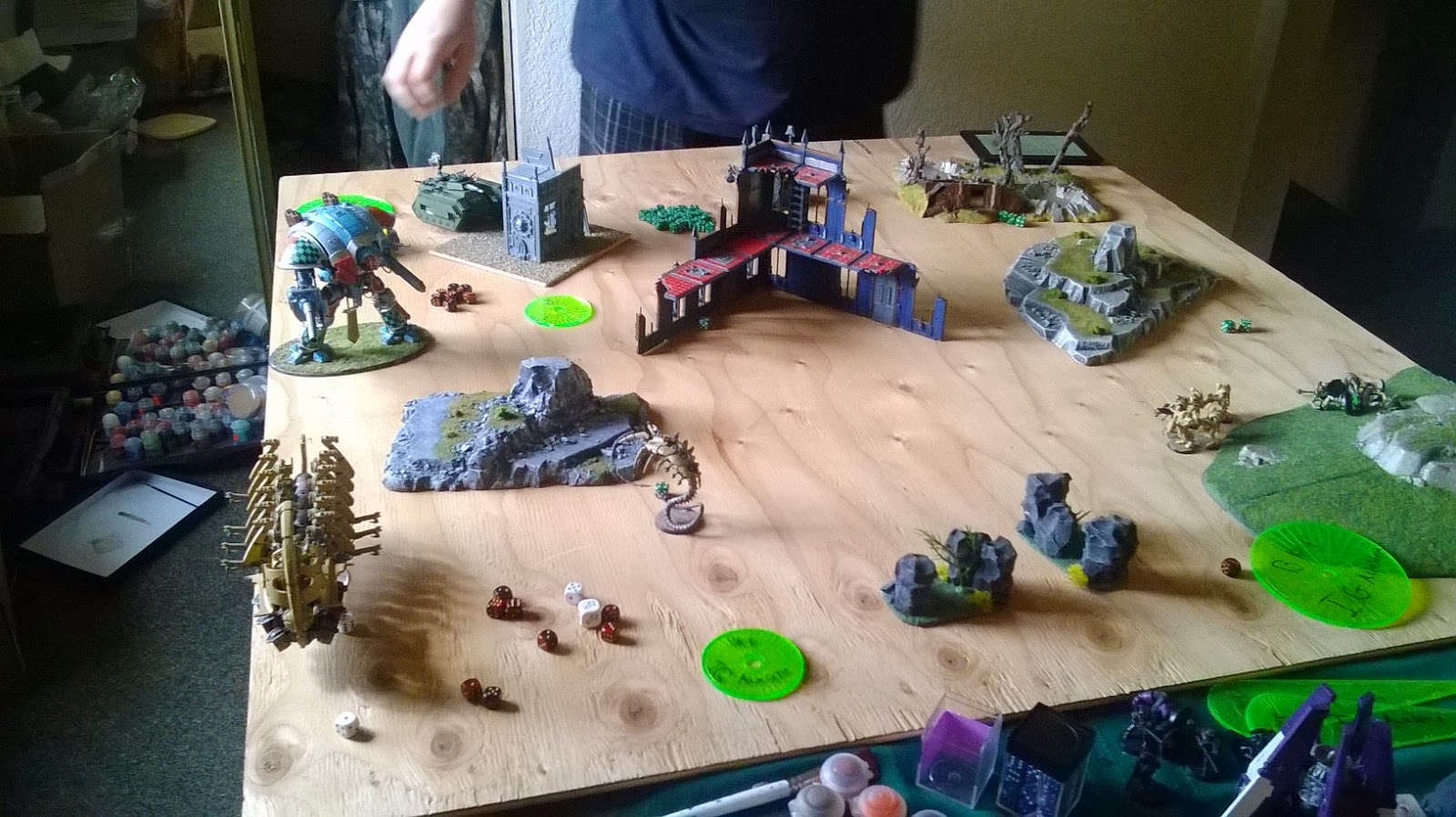 His turn he moved his lord up and the warriors out of terrain, using the building as cover.  His ark fired at the chimera, but I was lucky again and he only got a glance on the front armor as he was just out of the side ark.  No other shooting against the knight.  His lord assaulted it and did a hull point.  The knight whiffed most of his attacks and got one hit through, which I rolled a one taking a hull point down.  Stomps failed to do anything, so we sat there looking angry at each other after the slap fight.﻿ 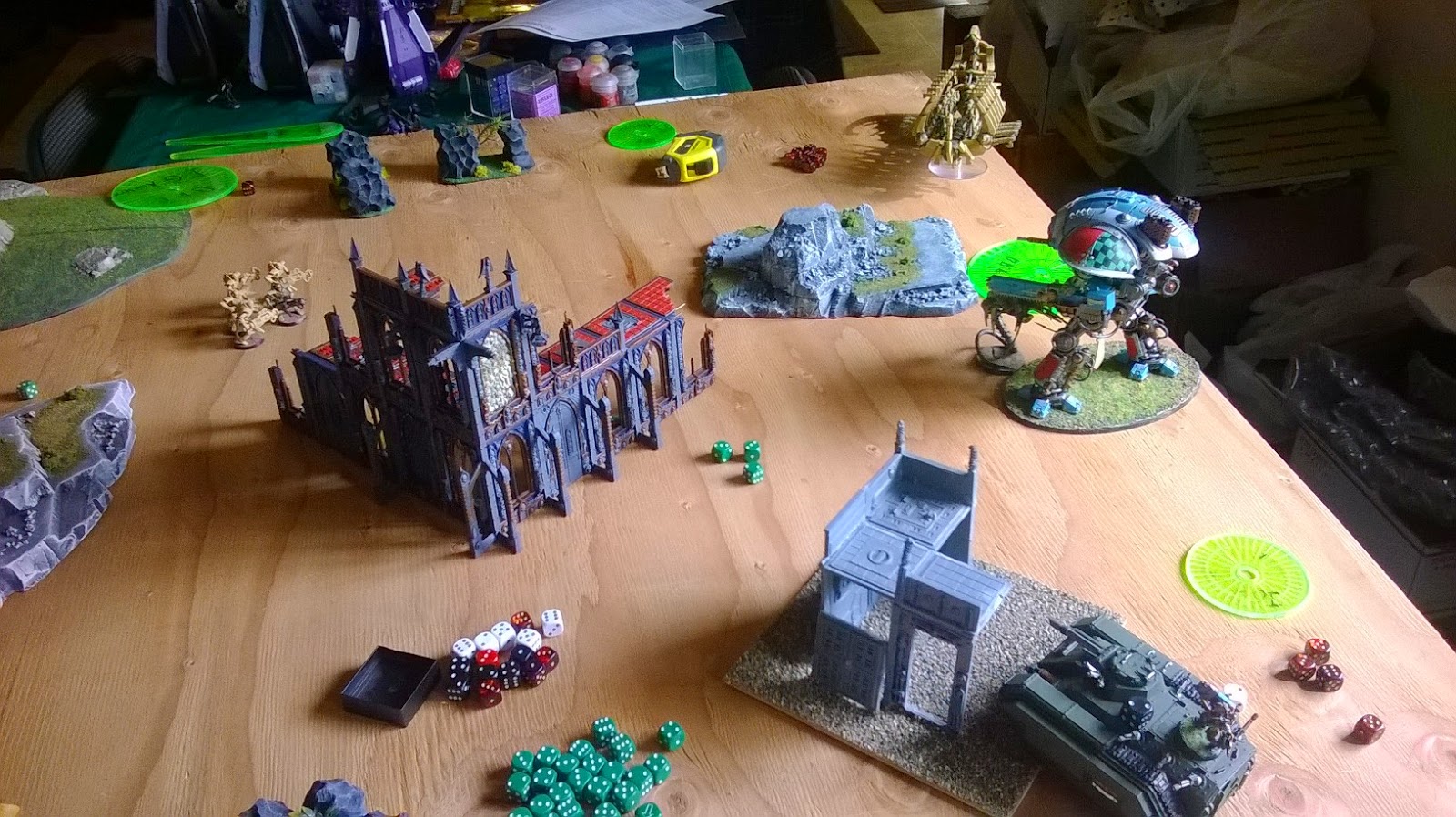 ﻿
In my turn my plasma cannon was able to get through and knock a hull point off of the ark, those quantum shielding make it a tough cookie without dedicated AT.  Knight was stuck in combat, which he proceeded this time to get two hits and blew up the barge and then D'd the lord.
He shot at the Chimera again, knocked another HP but failed on the pen chart again.  At this point he called it, though I think he could have played keep away with the ark, he really had little left and the knight was going to blast the warriors to pieces or destroy the ark next turn, if my movement was luck as he would have to move through terrain due to his base size.  He made mistakes by placing the warriors to far away and assaulting the knight too early, should have used mobility to play keep away and whittle it down before going in for the kill.  Had the warriors been closer he could have used the gauss to get some glances on it along with the barges weapons.
These really aren't great examples of a fighting a knight, as my brother rolled pretty bad all day, just could not get past armor or roll well on the pen chart which lost him both games.  Knight is a tough unit but that first game should have been his hands down, but not getting a single 4+ with meltas was brutal.
Hope you enjoy, and will try and get some more games in, probably at 1000pts this time to give more of chance.  At 500pts you have no room for error, either you kill the knight and win, or don't and it kills you.
GG﻿
Posted by Grumpy Guardsman at 4:14 PM