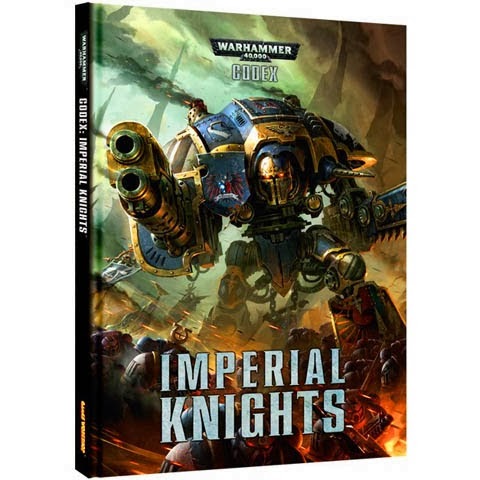 The knight and codex are now out and since I am a big fan of this model I wanted to do a full review of both the codex and the model itself.  As many have stated, it is gorgeous and has a lot of great detail in the model.  On top of that it is great for customization and a pretty easy model to build and paint on top of that.  The codex itself is usual GW fair, meaning excellent artwork and some really good fluff.

Its a short codex, more of s supplement length than a main codex, but most of it is fluff.  The fluff part is really good, I won't go into great detail, but it really does a good job of covering the history of knights and how they came to be.  It also explains why its not allied to chaos, giving specific mention to demon knights and how they are different.  So most likely meaning chaos will get one down the road, which I prefer.  Chaos will deserve different rules and though people will bitch, it's the right choice.

Now here is where it gets interesting.  If you take Knights as your primary, choose one and he is your warlord.  That one has increased stats, the seneschal rank giving your warlord WS/BS 5 with 3+ ion shield.  Thats pretty nice.  Now for your primary you have to take 3 knights, up to 6.  So if you were planning on taking 3+ knights, make them your primary.

There really is only one that isn't that great, the building one, as that is situational.  But the rest are darn good, especially that 6, talk about a hard model to kill.  So not bad at all.  Def not the worst warlord table I have seen and a good portion help out other knights your bringing.  Now you can also choose to roll on the knightly ranks table at the same time you are rolling for warlord.  You must roll for all or none.  Roll for each knight in your army, on a 1 your knight is an Apparent, -1 to WS/BS and Shield, 2-5 nothing, 6 it is a Seneschal.  So if you roll some 6s, you can have some very tough knights.

I like that it is a choice and to be honest, unless you are taking a lot, I would just keep them as is.  Now as to which one I would use as my warlord, definitely the Paladin.  Why?  Well its to maximize the use of the BS5, it has 2 H Stubbers and 2 large blasts, it can still make use of WS5 equally as an Errant and the same goes for the shield.  So it really comes down to which one benefits more from the stat upgrade, and it is definitely the Paladin.

Now it goes into data sheets for the knights, and yes it only has the two.  But it also talks of the the other knight variants.  So I have high hopes that these models will be released down the road and expand the knight faction far more.  This I cannot wait, and will be awesome to have a Knightly House detachment.

If you are going to get the codex though, get the digital.  Since its shorter and is essentially leaving it open for updates down the road, go with the digital.  You get more bang for your buck and artwork is just as pretty.  And if its updated down the road, it will hopefully be a free update, or at the very least you are not in it as much than if you buy the hardback.  Its not a bad buy, but go with the digital on this one.

As for how to run them, I am seriously thinking of going with a primary detachment of 3, prop 1 paladin as warlord and two errants.  This leaves me 735 for 1850 size army.  That is plenty for an allied detachment of IG with command squad and vets in vendettas, or an aegis line in the back with platoons in Chimeras.  That is how I would run them.  Either go with air power, or go with mech infantry, that way they can keep up with the knight, and protect it from units that can hurt the knights.

Another way to run it is with artillery.  Keep it in the backfield and just pummel your opponent with long range fire while the knights cross the board, force your opponent to choose between knights or artillery.  All in all I think there are many ways to take these guys that are fun and not leave you with too many weaknesses.

Now if you are unfamiliar with the knight rules themselves, basically they are AV 13 13 12 with 6 Hps and have all the Super Heavy walker rules.  So they move 12", have hammer of wrath, fear, stomp, are immune to damage table effects, can shoot at multiple targets.  The only difference between the two is that the Paladin has a rapid fire battle cannon (S8 AP3 Ordnance 2 large blast 72") and two heavy stubbers, while the Errant has the giant melta cannon (S9 AP 1 Heavy 1 large blast 36" Melta) and only one heavy stubber.  The Errant is 5pts cheaper but really they are pretty much identical.  Me personally I like volume of fire, so I probably will go with the Paladin as my main one.

So the codex is good, how about the model?  Well it is even better.  As a model for the experienced or beginners, it is a blast.  The instructions are very clear and show where all the detailed pieces go.  It really snaps together fast and if you are looking to just build it, it really is a breeze and comes together quickly.  There is great detail for painters and you can really go to town on your paint job.

Personally this is one of my favorite models to put together in a while. It just comes together, there is minimal mold lines and the pieces just fit.  It also is great in that the arms are fully posable, you have a piston on each one that you glue for the weapon and chainsword arm, all they do is glue in place the weapon's angle in the joint, if you don't the chainsword will hang limply.  But the rest of the arms are completely posable and only need minimal gluing.  The sockets for the shoulder twist in so you have no need to glue the arms to the shoulder, making it a breeze to switch out weapons or for transporting.

I magnetized my weapons so I can switch between the melta and battle cannon, it really was easy and I'll go into detail in the hobby post on building th knight.  The model really is great because you can decide how much modification you want to do, or how little.  It looks great on its own.

In my opinion, the knight is a home run.  The codex is solid and has great fluff and artwork and the model is awesome and a blast to put together.  I can understand why they only included the one kit as part of the release, it gives them options to do more if the knight is successful, or leave it as is if it doesn't.  I know its evil, money grubbing, business practices, but despite what many think, its fucking expensive to make a model and mass produce it.  Its a huge risk, so instead of doing a whole knight model line, they tested the waters to see how it goes.  And its going well, my store has yet to get more in stock.

And no, you don't have to pay for anything.  If you don't want to pay for it, then don't, please do not whine about how its not fair that they didn't make one for everyone.  That's not how this hobby works.  Chaos will get its own, and it will be good because it will have rules that reflect its demonic powers.  If you want the chaos one, well wait for it, you don't have to buy the IMPERIAL knight.

This is truly a great release for 40k.  For the hobbyist and gamer alike, you really won't be disappointed.  Its got some great fluff, good rules, and the model is wonderful.  If you like the hobby aspect, this is really hard to pass up with all the cool things and dioramas you could do with this.  If you are looking for a centerpiece unit to add to your imperial army, look no further.

I personally cannot wait to expand my Knight house.