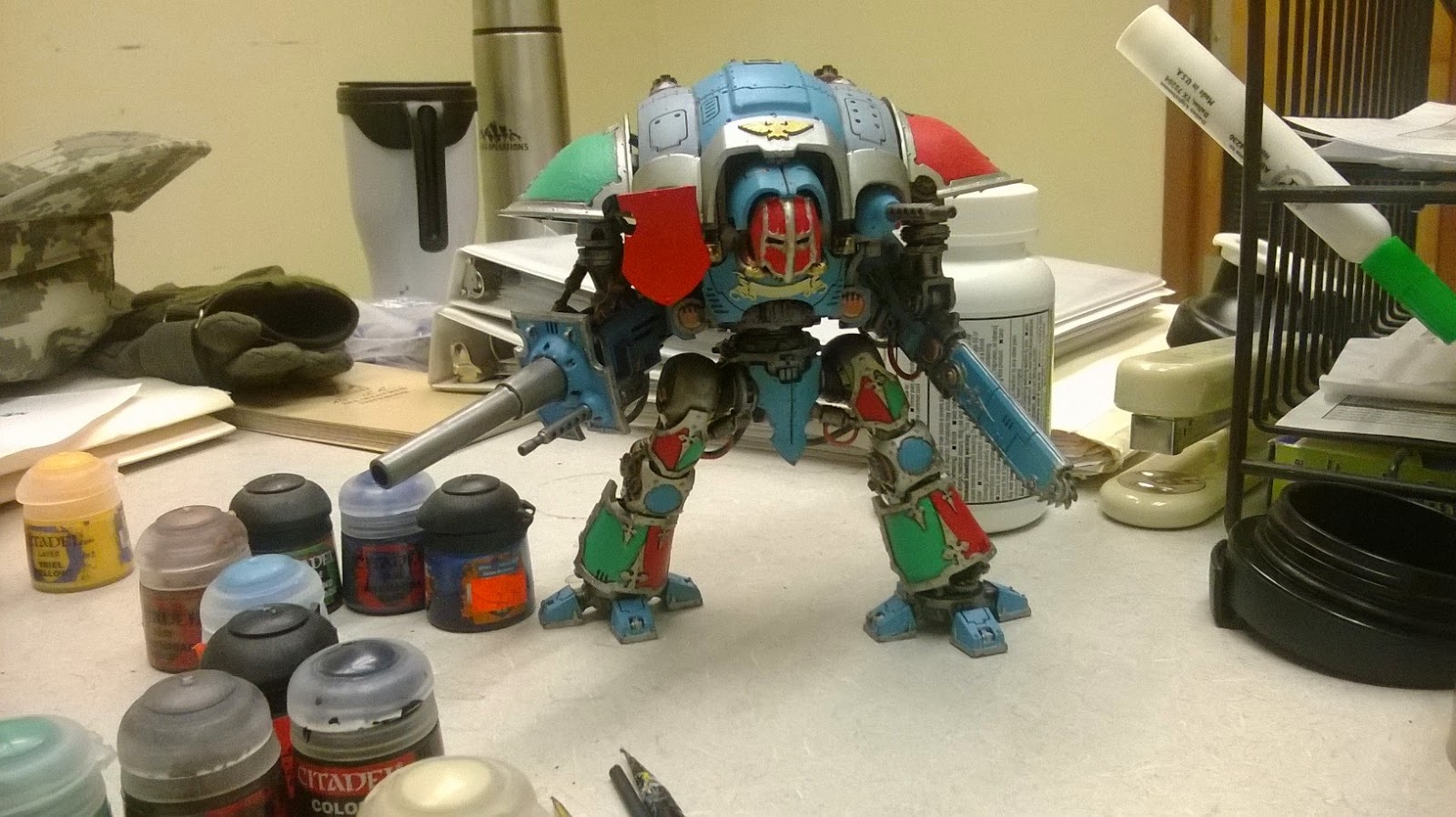 So my knight has neared final completion.  I have yet to do the base, but the painting is 90% complete except for the banner at the bottom, thank you another staff duty giving me more painting time.  I was originally going with red and yellow for the accents, but the yellow was being a pain in the as and I really didn't like the look.  So I changed it to the greed, which I later checker boarded with black to break up the solid color.  The red will have the house and personal heraldic symbols for the knight.  The House symbol is the Sword & Dragon, with the house being made up of multiple clans (will go into fluff more in a bit), the clan symbol being the lightening bolt, which is added in the top right corner. 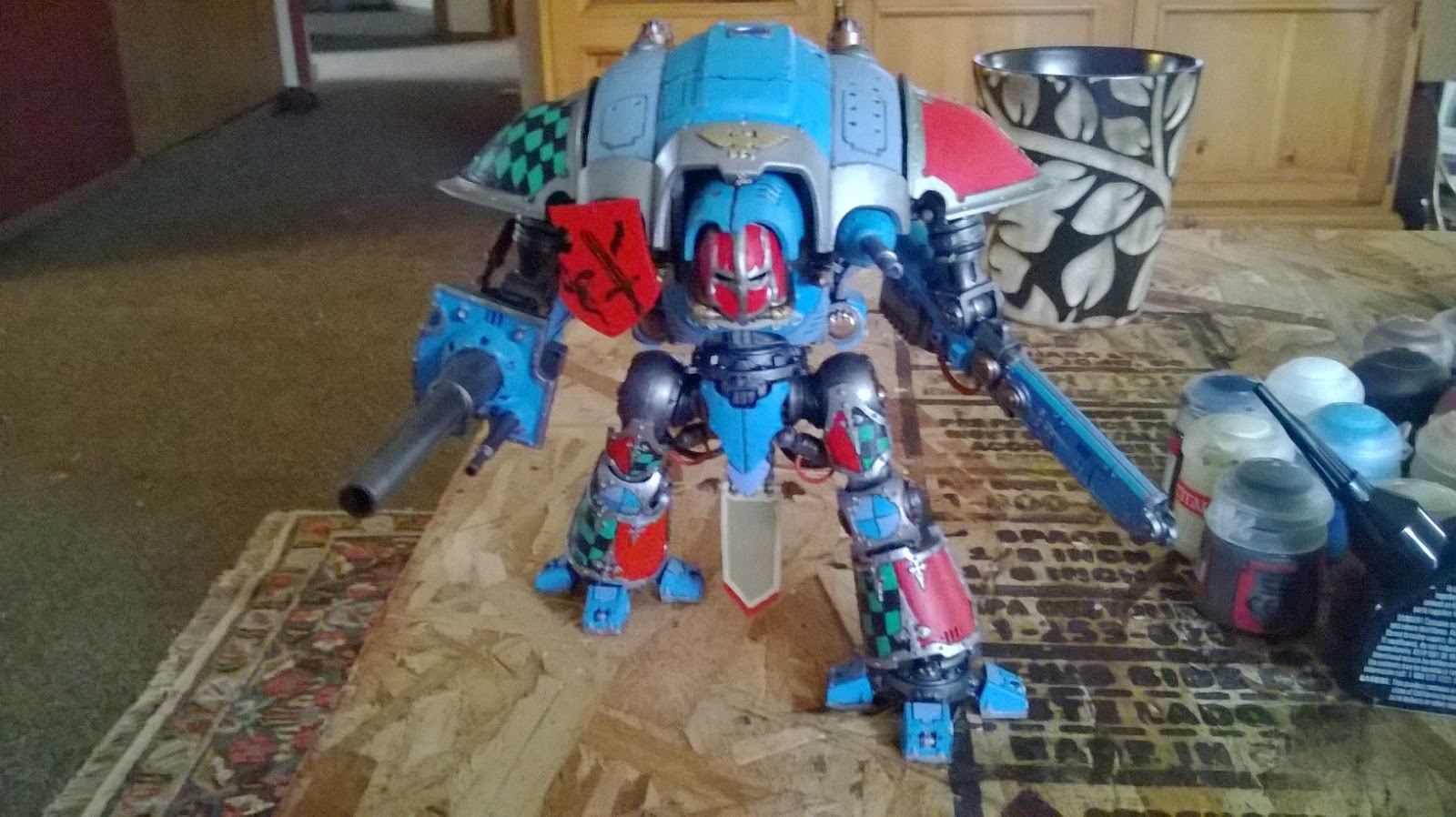 I like the look and as I'm adding more detail to the shoulder pads and other armor pieces, its coming together more and breaking up the solid color.  This is one of those pieces that is never truly going to be done, but I am happy enough with is to share.  As I did talk about the arms being completely posable, this is what I mean: 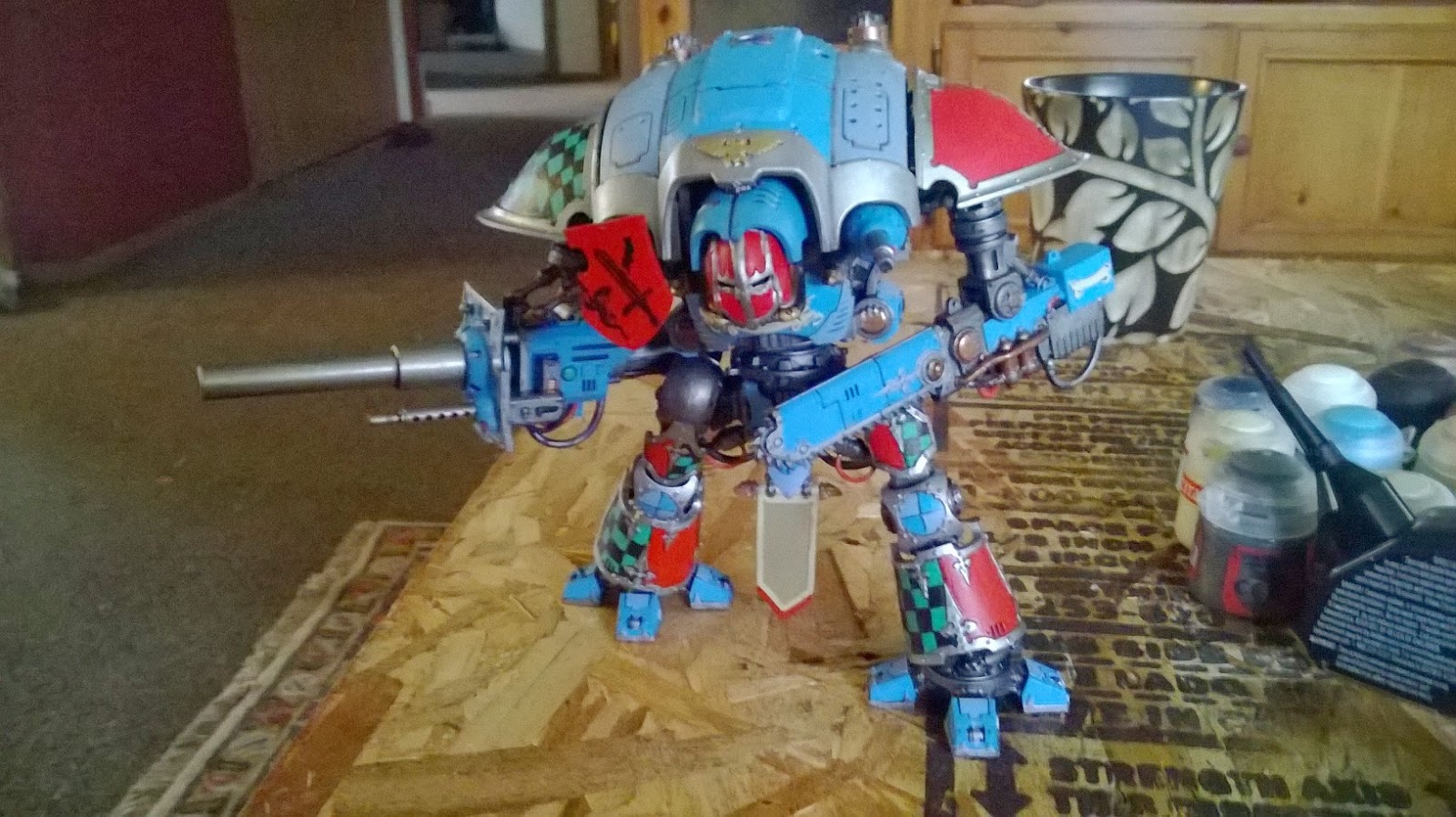 You can pretty much move these around as much as you want.  I like this also as it makes arguments of what the knight can shoot at much easier, I can simply rotate the gun and aim at what I want :).  Here are some more shots of the over all knight. 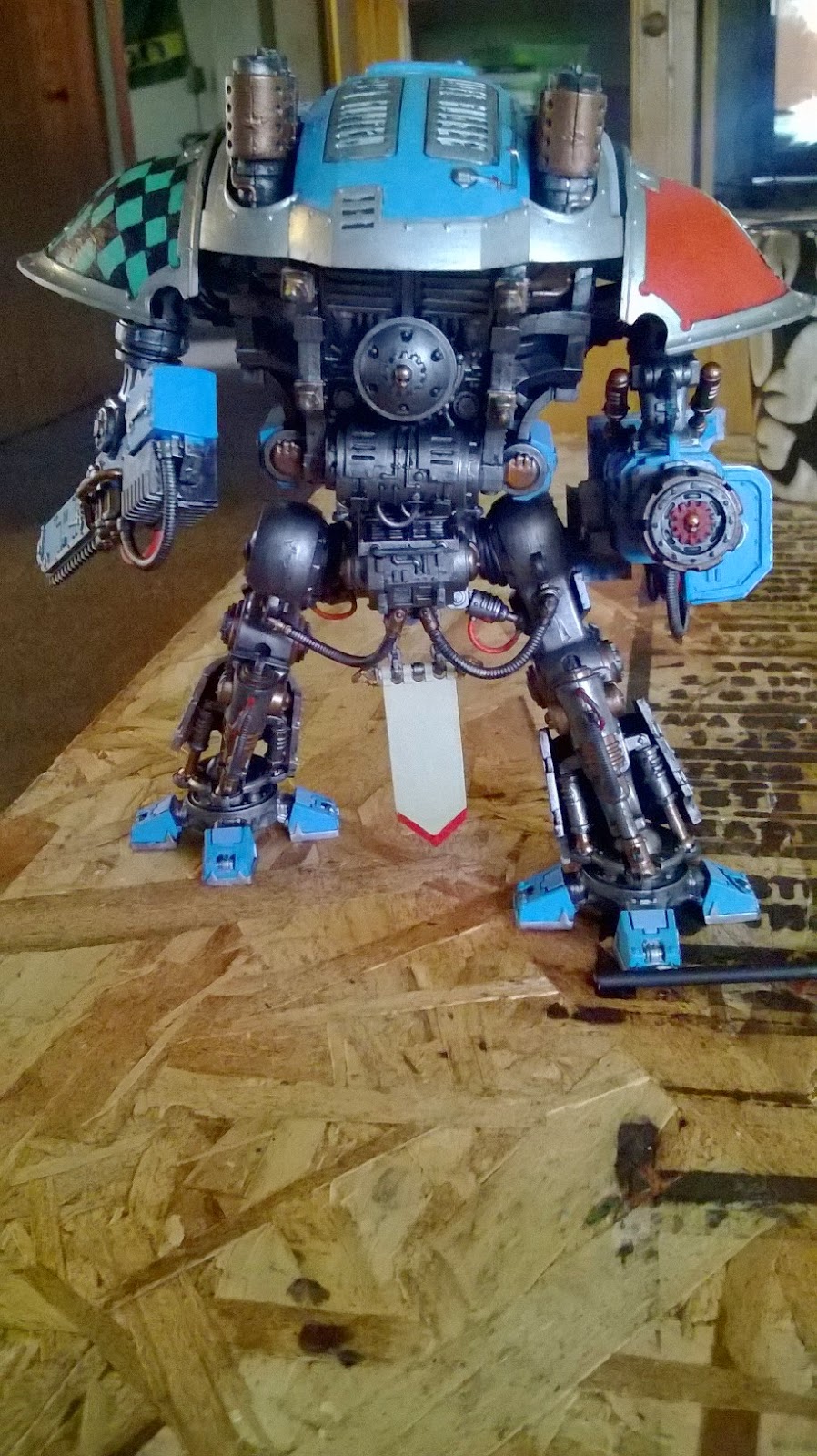 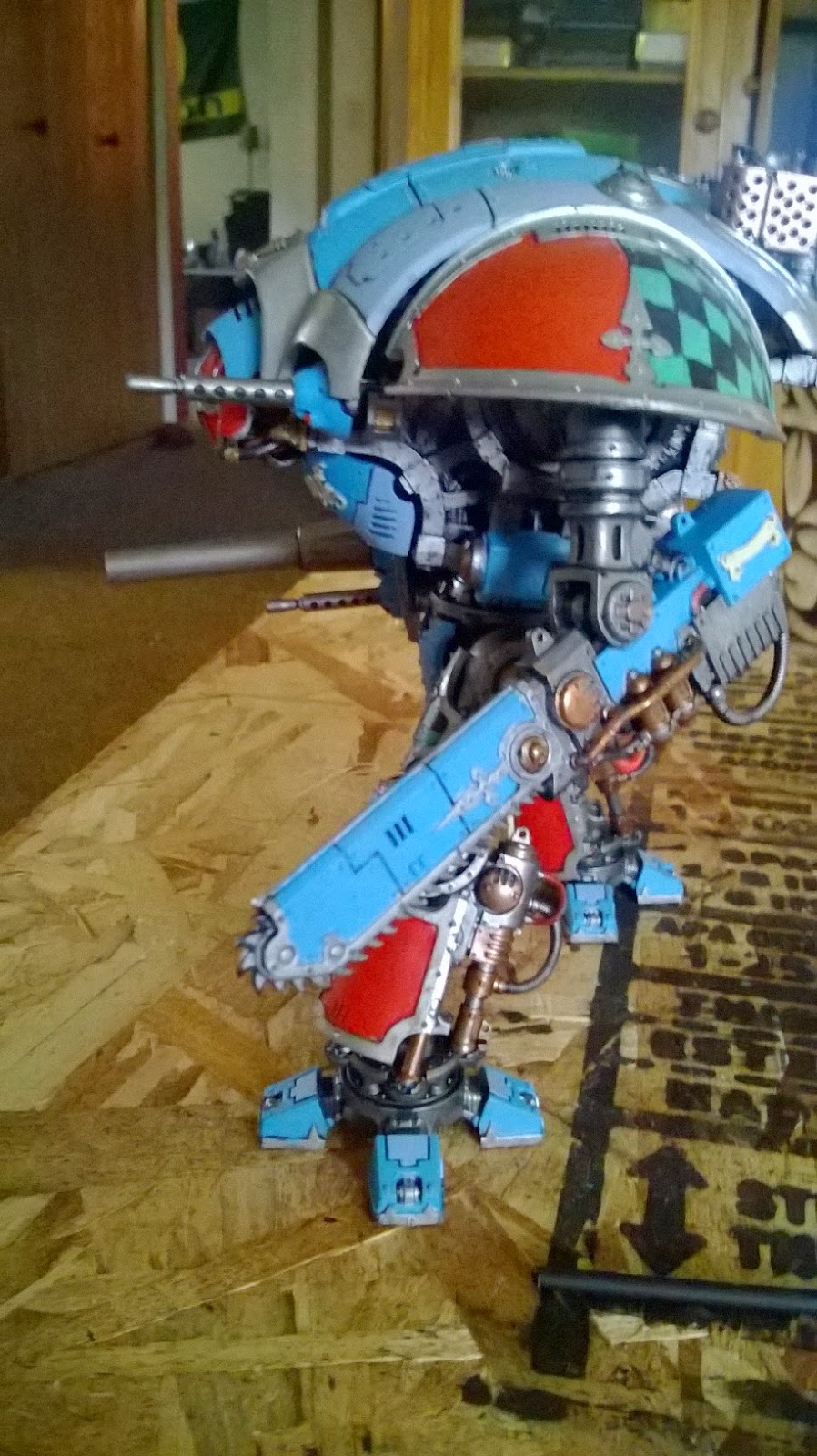 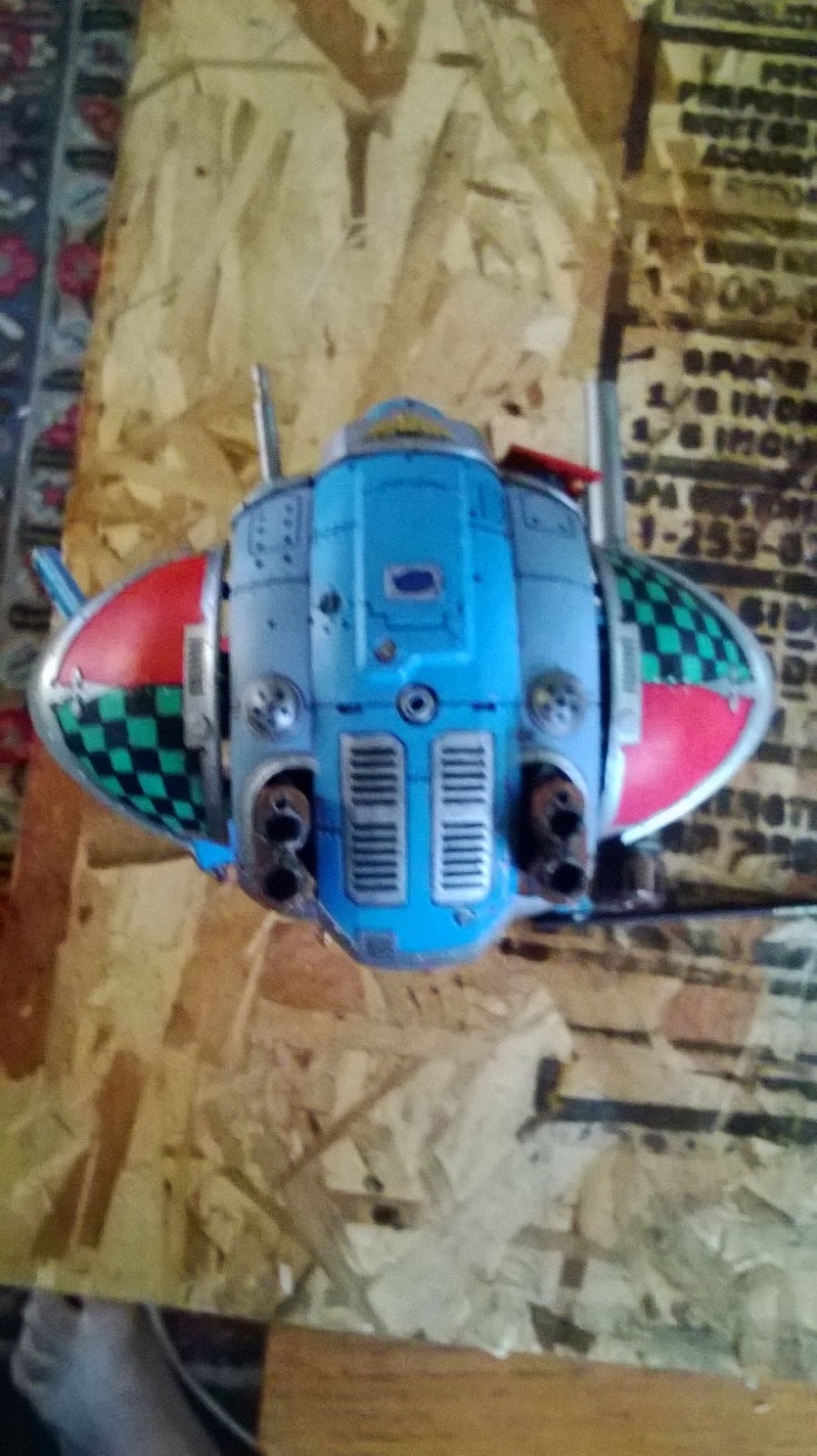 Not quite complete but I am happy with how it all turned out, I'm really glad with the green over the yellow.  Now hopefully I can get a game in with or against one in the near future.  Note that the thermal cannon is just as posable as the battle cannon.  Ok now on to some fluff.

My knight hails from the world Svalan, a cold, forested world dominated by steep mountains and labyrinth coastlines and fjords.  It is ruled by the Knight House Seigert, the Dragon Slayers, thus the Sword and Dragon being their symbol.  House Seigert is different from most houses in that it is divided into many Clans, each being semi autonomous and ruling portions of Svalan.  Unlike some worlds that have many houses, each Clan is oath sworn the Great House, with its ruling leaders and head of the house being taken from the Jarls of the Clans.

House Seigert was at one point just one of the many clans, but during the early years of the great crusade it became the dominant Clan and through marriage, war, and support form the expanding Imperium, it united all the clans under its Banner and formed the Great House of Seigert.  Though there still exists the Seigert Clan, the millenia of intermarriage has made the distinction moot.

The varying clans of the house compete in feats of skill and combat, hunting the great Wyrms of their world, as a noble can only attain the rank of Huskarl by slaying one of these beasts.  Huskarls form the bulk of each clans fighting force and are sworn to their Jarl, the leaders of the clans.  Some clans have multiple Jarls, while some have only one, varying in the traditions each clan has.

During the Great Crusade, it was the Sons of Russ that first discovered the Knight World, and in admiration of their warrior culture and the ferocity of their world, the Wolves forged a pact with the House of Seigert.  Through the Iron Priests, the Knights and Artificers were repaired and their ancient suits were soon joined by knew ones, aided by the knowledge of the forge the Sons of Russ had.

Of the Clans, the House of Hurden, the Stormborn, have been long prominent and rightly feared.  The Lightening bolt is their symbol, due to the stormy nature of their coastal fjords and due to their preferred method of war: launching surprise attacks, preferably from the heart of a maelstrom.  The young huskarls take the privilege of acting as bait, setting the trap and proving their worth and skill in combat.  Once the enemy has committed, the trap is sprung and the Jarl leads the charge of knights under the fire of their heavy support knights, butchering the surprised foe in a hail of gunfire, explosions, and screaming chainblades.

Clan Hurden also makes use of the much famed tactic of House Seigert, the Skjaldborg or shield wall, where the knights form a rank with their Ion shields protecting their front and the knights next to them protecting their flank.  Many an attack has faltered against the fortitude of the Skjaldborg, unable to dislodge the knights as they rain fire upon their foes and soak damage upon their shields.  In these instances the few Lancers the knights have protect the flanks preventing the foe from attacking the side of their formation.  With their heavy support behind the main line, there are few who can withstand a fight against the Skjaldborg.

The knight above is Huskarl Karlson, one of the youngest knights of clan Hurden, with few raids to sing of.  He is currently attached to the Cadian 438th, in Segmentum Ultima, and is eager to engage the great beasts of the Great Devourer and prove his worth to House and Clan.

Don't forget to check out the podcast and let me/us know your thoughts, we acknowledge that their is plenty of room for improvement.