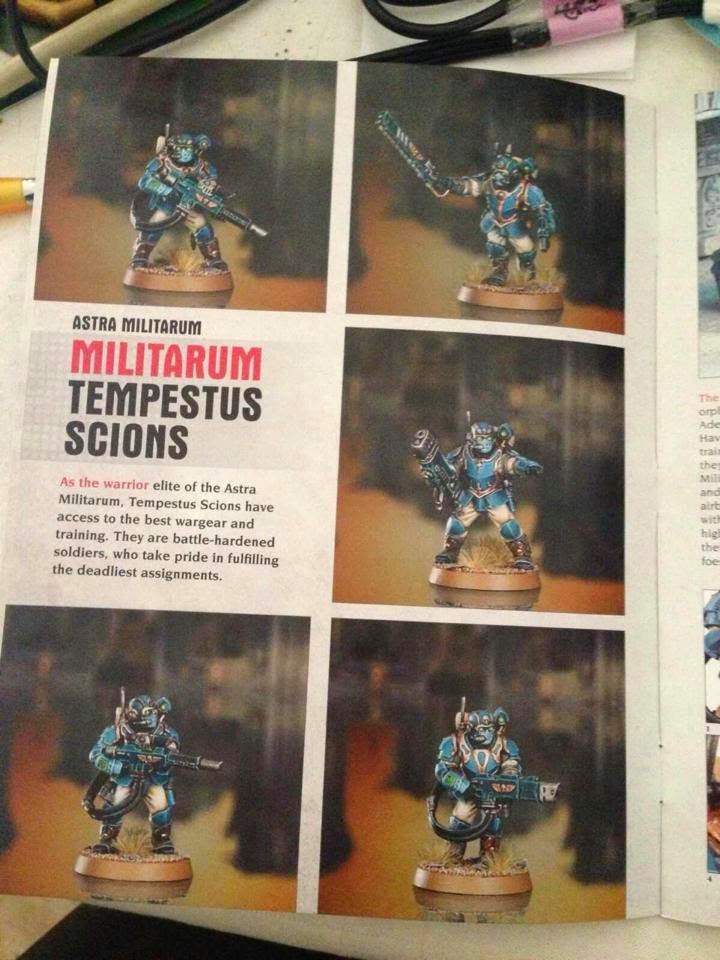 Big rumors have broken for IG, more specifically on the Tempestus.  The full line up of pics are here and here. I am really liking the new models more and more, they just look cool.  I like that they are not just a redo of the old models either, they have nods to older models but they look different and are not a rehash of the old.  The weapons look awesome and I am really excited to see the full stats on them, especially the hot shot volley gun.  What also is cool is a laspistol chain blade!!! 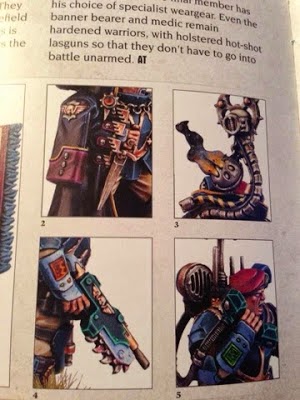 Cool pics aside, the models look good and point to a solid release for STs.  The more I see the Taurox, the more I am liking it.  I still will most likely be taking those tracks off though, but the rest of the model is looking good.  There is a pic in the link of one in more traditional colors, and I will say it looks a lot better, the teal color they chose to use is god awful IMO and the model looks much better in a different color.

On to some rules.  Stats for STs look unchanged, though full stat line was not released, but basics of WS3 BS4 S3 T3.  Nothing on Hot shot lasguns, but the volley gun is S4 AP3 Salvo 2/4.  This I like, if it is a reasonable upgrade price then this may be the gun my STs are armed with.  There is also an Overcharged Lasgun, no leaks yet on what that will be.  It is really looking like the STs are getting some serious love.  Points wise they are getting a drop, looking to be marine price range.  I wish it was a little more, but that is enough of a decrease to make a difference.  Depending on overall rule changes, Storm Troopers should be making a solid comeback.  I am really happy about this.

Now the Taurox is not what I expected, but I kinda like what they are doing with it.  Its looking to be 10-15 pts more than a rhino with AV11 10 10 and is fast.  It has the Volley gun and an auto cannon(TL?).  Now it is not clear whether the upgrade weapons are for both the Taurox and prime, but the prime can take a T Battle Cannon (S7 AP4 Blast/Large?), 2 shot missile launcher, and Gatling cannon (S4 Heavy 10).

I'm liking this, no word on prices for upgrades but expect a fully upgraded Taurox to be more than a chimera or very close in price.  So really it comes down to what you want, The Taurox looks like a good cheaper alternative the chimera that is faster and can put out more firepower at the cost of front armor.  So you can go with Chimera if you are looking for higher front AV, but at the cost of less firepower.  The Taurox is looking to only take 10 models, so you'll have the Chimera to carry more, plus its looking to have more shots out of the hatch than the Taurox.  So I don't see it replacing the Chimera, but I see it having a place in a much more mobile army that wants to get in your opponents face fast.  Combined with STs and possible Ogryns, this seems the choice they will fill, not replacing Chimeras but supplementing them.

I also like the cheap access to fire power.  Though initially seemed that it would get a straight battle cannon, I still like that T battle cannon, basically a blast autocannon with one, maybe two shots (not clear yet).  There is an option to drop the volley gun for a TL autocannon as well.  So what you have is a highly mobile transport with pretty decent firepower.  Its weaker than a chimera and can't carry as much, it won't replace it but will add to your army.  If you are not looking to take heavy armor, this is a great option and will synergize really well with hellhounds, both being able to keep up with each other and put out firepower.

The Tempestus command squad is basically a platoon command squad, officer gets one order and can take the standard upgrades (medic, standard, vox), plus the new weapon options.  Here is your ST command squad!  Yes I can finally do my ST army and have actual storm trooper commanders leading them rather than count asing them.  I really like this, as I have said a lot in this post.  This is looking to be a really good release, regardless whether its in the Tempestus or Astra Militarum book or both.  I will honestly be picking this book up, if you love STs as much as I do, you'll probably be doing the same.  Now I will do a review, so if you want to wait to see, have no worries I'll post my thoughts on it as soon as I can get my hands on one :).

Just to be clear, this is all rumors on the Tempestus book specifically, so some may not make it into the main IG book, but expect the main STs to make and the Taurox, but the command squad may not.  The Prime may be Tempestus only, but its not clear what all the upgrades are and whether they are for the Prime only.  Either way I don't really see it as an issue, its not going to be such an awesome vehicle that you are going to miss it over your chimeras, though both will have their uses.

More leaks on Tempestus can be found here and here.  Tempestus can be taken as platoons and the medic upgrade is 15 pts cheaper from the current one, this goes a long way to making that a possible upgrade.  Has full rules for the Taurox, the prime is looking to be the better choice in my opinion.

A lot had broken and hopefully more keep on coming.  The IG is looking to be good!
Also if you are looking for some fluff reading check out my Imperial Guard history posts for Armageddon and Cadia.

GG
Posted by Grumpy Guardsman at 7:58 AM