Starting an Astra Militarum Army: Where to Begin 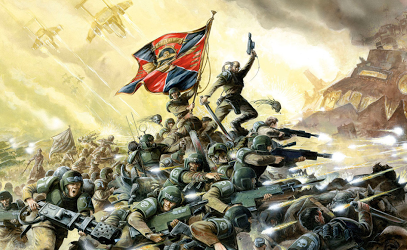 To shift gears slightly, I am going to start a series of articles on getting into the hobby, specifically on collecting an Imperial Guard army (of course).  I have gotten a lot of messages and comments on this subject and while I take for granted the knowledge I have from being a guard player for so long, I realize there are a lot that are going through the same issues I face more than a decade ago (emperor help me!).  I intend these to be more than me just spouting at you, so please leave comments or emails if there is anything specific you would like me to cover.


With the Imperial Guard/Astra Militarum, you have one of the easiest and hardest decisions to make.  The IG are the most diverse army of the entire 40k universe, hailing from the million worlds in the Emperors domain.  You are given an entire galaxy to choose from, and are more free than any other army in 40k to choose the history and look, with really only weapons and vehicles limiting your imagination.

If you are starting or looking to start an IG army, then you have made the right choice in my mind :p.  You are choosing to play the people of the Imperium, the conscripted, rarely voluntary, masses that make up the Imperial Guard and are sent forth to hold back the tide and let the imperium survive another day.  On their own they can never hope to match the threats the galaxy offer man to man, but the Imperial Guard wages war on a massive scale and out shoots and out bodies nearly ever other race and army.

When you look at collecting and playing, the hard part can be getting an idea of how you want to play the IG, with so many different combat doctrines and regiments, this no easy task.  The double edged sword of the imperial guard is its diversity, there is no one way to play it.  There are common threads to be sure and I'll discuss those.

The hardest part though is simply going to be what regiment you want to do.  And here I can give you no solid answer as that requires the Why, and only you can answer why you want to play imperial guard.  What ever it is that draws you to collect IG, use that and follow it.  If tanks are what you love, figure out a look and idea that fits it.  If you are new to the hobby overall, try and figure out your general play style first.  Despite never playing 40k or table top, you can generally figure that out by looking at how you play other games in general.  For me I like to play defensively early and switch to offense later in the game, so my army is made up of infantry and long range weapons with an aegis to sit behind, with some fast moving elements to maneuver later in the game.

Get an idea of How you want to play, this ties into the Why.  How you want to play is going to lead into the type of units you will want and how to structure your army.  This will help you out so much when you start to buy models, as the main draw back of the IG is in how many you will most likely need.  I always struggled to have the right things on often found myself buying stuff I did not need because I did not have a clear idea of what I wanted to achieve with my army.

Choosing your regiment will be hard, you have only two plastic options, that being Cadian and Catachan.  Cadian equipment is also used throughout the imperium, so you can use the base models to make your own regiment without them being cadian.  There are plenty of metal models, but the options are limited and many of the GW ones are old.  That being said there are other companies that make IG look alikes and victorie miniatures does a good job and has a good line of infantry that help you find something you like.  Forge world has the Death Korps of Krieg and a few lines of others like elysian drop troops.  In any case you are going to spend quite a bit for a large Imperial guard army, so find something you like, because you are going to have to live with it.

If you go the plastic route and get cadian/catachan, the best place to start is with the battleforces, now called the defence forces.  What you get is a command squad, two infantry squads, heavy weapons squads, a leman russ and chimera.  If you don't have any specific theme or army you want to play, this gives you a bit of everything and is well rounded, nothing is bad and you have a playable army from the box, which few truly do, though more are getting closer to this.

You're always going to need infantry, even if you want to take tanks, you'll need a few infantry squads for force org.  Sure you can go unbound, but its always good to be able to play with both army building options and not be shoe horned into only unbound. Heavy weapons are really good and if you are willing you can magnetize the options so your not shelling out so much for different heavy weapons like I did.

If you are struggling on what weapons you should be taking and what to arm your squads with, there are a few general rules that will help.  If you are looking for general anti infantry, heavy bolters, grenade launcher, and flamers do the job well.  Anti tank and MC work have plasma guns and lascannons and melta guns.  The autocannon is your generalist and you will always be safe going with.  Mortars are another good anti infantry option that allow you to hit hard to see targets.

Start off with core units and then work your way out as you start to get a feel of how you like to play with the IG itself and your own play style.  A combined arms army is your best initial approach.  A lot of the fluffy regiments are fun but have a high learning curve to get the most out of them, and if you are ok taking that on then please do.  I lost a lot of games back when I started and there is nothing wrong with that, you get better and learn and figure out whether your ideas you thought were super genius really are.  Going with a core of infantry and a few tanks and artillery will give you a solid army and it will do well and give you an idea of whether you want to expand upon it or go into a different direction.

The key to understanding the guard is MOAR!  The IG want more and more and that is how they function well.  Its not an army of half measures, your going to want lots of infantry, or lots of tanks, or lots of artillery, or lots of everything.  I'm not going to lie, its a hard army to play if your hobby fund is small.  There is ebay and other sources though that can help you out and should be taken advantage of.

Also key to this and ties into it is adopting the right mindset of the IG.  This is an army of attrition, not an elite formation that is powerful but cannot take casualties.  When building your army, redundancy is key and so is accepting losses.  The hardest part of playing IG is watching all the bodies pile up and not losing your cool.  Just Keep Playing!  Play till the end, don't give up just because you may get tabled.  Use every opportunity to learn, and many times you can snatch victory from defeat because you are in the game still and your opponent relaxes and makes mistake because he thinks he has it in the bag.  I personally hate it when someone gives up, I want to scream KEEP PLAYING!  Not because I like crushing people, but because I know that its an opportunity to learn and get better.

You really have to get used to steeling yourself and accepting all those casualties.  Once you embrace that mindset, you'll do so much better.  I tried when I started playing to play like space marines for lack of better term.  I liked quality units over quantity and played in a way were casualties were not something I factored too well.  Unlike an army like space marines where even a few can turn the tide, the IG simply can't do that.  This is not to say you shouldn't use better units, but that you need to build redundancy into them, even a single squad of scions can only perform so many miracles.

Now I love the fluff, and I think I have made that pretty clear.  But I understand that not everyone is going to like it as much as I do and just want a cool looking army that kicks ass.  And you get that with the IG, its a very strong army and has some great units to play with.  If you are like me and love the fluff of the IG, then get even more into it, find your inspiration and build off of it.  It really does help you get into the Imperial Guard mindset.

Hopefully this is helpful and gives you a starting point for getting the best army in 40k :p.  I'll continue with this and go into more detail on what to look for in certain armies and how you should be building and collecting them.  And please comment if there is anything specific you are looking for or having trouble with.