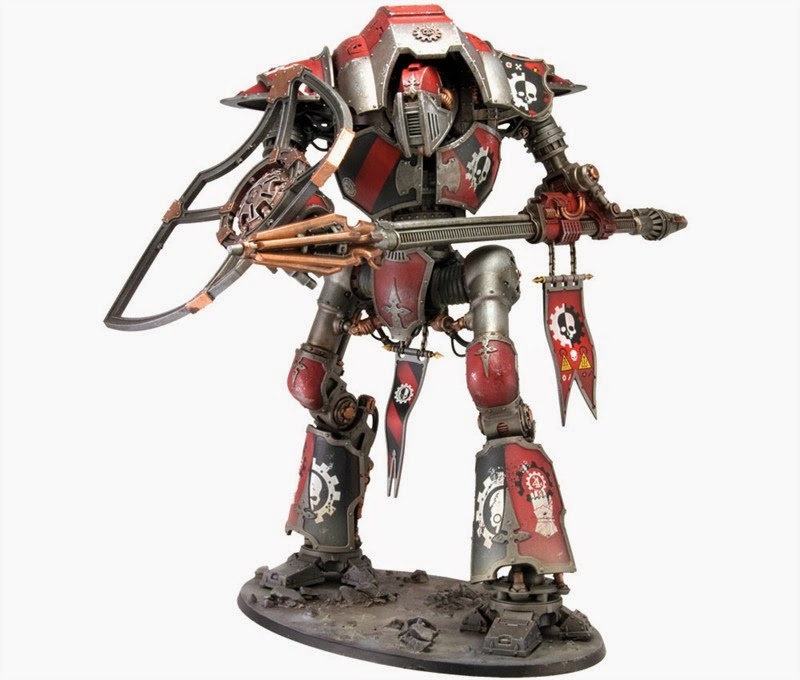 Today, I want to go in a different direction and talk about the forge world knight (and the others on the way).  As a reader reminded me that I love knights, though I have been heavily distracted by my scions recently.  I am a big fan of them and the FW one is a really cool addition, though honestly I am more excited about the others that are on the way.

The Cerastus Knight Lancer is the fast attack variant of the knight (not FoC slot), it ranges out in front of the Knight's main force and launches flank attacks on its opponent.  Its the fastest of the knights and is meant to get in close and tear apart its enemies.  As such it has limited shooting but is better in close combat than the standard knights.

As a model its actually quite big, about half again as big as the standard knight. 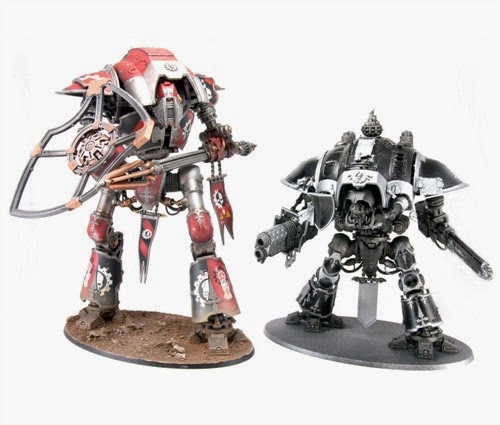 I do really like the model, except for one thing, its shield.  To me it looks half built, like they build the frame of the shield and forgot to finish it.  Otherwise it looks awesome.  The legs look much more powerful and  it looks like its supposed to be moving at high speeds.  Though i will probably not get one, I will probably end up doing some serious modifications of the standard knight to make a lancer.

As for the rules its not too much different.  It has the standard knight stat line, with the differences being in its wargear and special rules.  Its 25pts more than the knight paladin, not a whole lot more but enough to make you think.  It has the flank speed special rule, which allows it to run 3D6" instead of shooting.  This is a needed rule as its weapon is short ranged, so this knight is going to be moving rapidly early on.  Also this is good to use to get through the other side of difficult terrain if its in your way.

It has the Ion Gauntlet Shield, which works exactly as the standard ion shield with a few changes.  One is that it can never be used to protect the rear armor.  It also provides a 5++ while in close combat, and if fighting another super heavy or gargantuan MC, they suffer a -1 to hit in CC.  It is armed with the Shock lance, which can be used in close combat or shooting.  In CC its a S D Ap2 weapon with the swift strike special rule, which gives it a +1 to Initiative when charging into combat.  For shooting its a S 7 AP2 Heavy 6 Concussive weapon.  Its clear the weapon is meant to help the knight in close combat.  Use the shooting attack at a model you want to charge, lower its I with concussive and then charge it to finish it off.

How you use them in armies is done two ways.  It can be included in a knight army, though you cannot have more Lancers than you have knights of other kinds.  So if you have a paladin and errant, you can have one lancer.  If you have two paladins, you can have two lancers.  In addition, all Imperial Armies can choose a lancer as  lord of war.  Its a nice flexibility and allows you to take just one lancer if you don't want other knights.

Overall its a solid model.  Nothing too powerful, but its fast and even meaner close combat than the standard knights.  Its shooting is ok, good once you get into range and this will really be a good monster hunter, and for hunting those high I targets and eliminating them.  Tactically this knight will need to be used aggressively, it doesn't have the range of the others, but has a big edge in mobility.  Its run move is really good and allows you to get to the other side of bigger terrain pretty reliably.

I am really looking forward to the other knights that are coming.  The vulcan mega bolter one is the one that I am looking forward too.  I am a big fan a big gun that is lots of guns, so the mega bolter is sweet and I would love to have one on a knight.  Other than that the models just look sweet and can't wait to see what forge world has in store for the knights.

GG
Posted by Grumpy Guardsman at 10:12 AM