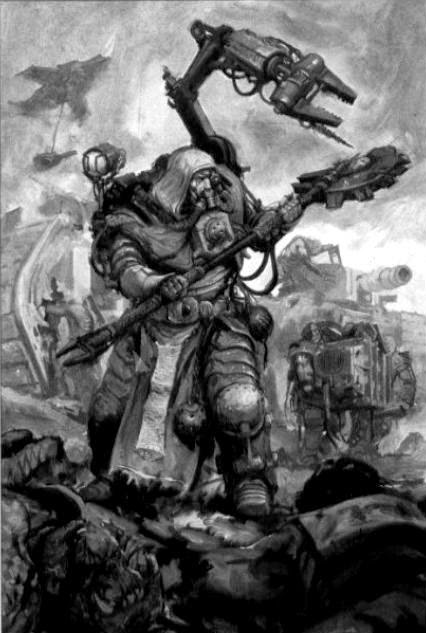 To change things up I will be finally returning to the Astra Militarum/Imperial Guard codex and continuing with the reviews.  Today will be the techpriest enginseer, a nice support unit that has gotten better with the new codex and 7th edition.  You prob won't be seeing a whole lot of them, and they are not a must take unit, but there is a lot of use out of them that previously was not the case.

Starting off they are 5 pts cheaper than before, and you can take 1 more in your army than before.  They are an HQ choice that does not take up as slot but they do not fill your mandatory requirement either.  Stat wise they are exactly the same, guardsman profile with Ld 8 and 1 attack.  As before they have a power axe, laspistol, servo arm, frag and krak grenades, and power armor.  They can take melta bombs for 5 pts.  Compared to before, you can have a melta bomb carrying techpriest for the price of a bare one previously, so its a nice bonus.

Where the things have changed the most is their special rules.  They are still and independent character and still have the blessings of the omnissiah.  Blessing allows you to repair a vehicle instead of shooting on 5+.  You must be in base to base or embarked and get a +1 for every servo arm servitor you have, more on them later.  If succeeded you get to repair a hullpoint, weapon destroyed, or immobilized on a vehicle.  You also have another option to choose from in your shooting phase, that being awaken the machine.  Awaken allows you to choose a single astra militarum vehicle within 12" and give it the Power of the Machine spirit special rule.  Note that no test is required for this, you just elect to do it and it happens.  This is a nice power as it allows ordnance wielding vehicles to fire another shot at BS and to counter shaken or stunned results for firing.

In addition to taking the techpriest, you can take servitors and this is where most of the changes are shown.  Overall they got a significant price reduction.  To take them you must have a techpriest, and for every one you can take one unit of servitors.  So if you have three techpriests, you can have three servitor units.  They start off as one servitor at 10pts (5pts cheaper), you can have 4 more for 5.  You can upgrade two of them jsut like before, but their weapons got tremendously cheaper.  The heavy bolter went from 20 to 10pts, the Multi Melta went from 30 to 10pts, and the plasma cannon went from 30 to 15.  So two plasma cannons from the price of one!  The servitors still have mindlock, if the unit does not have a techpriest, roll a D6, on a 4+ the unit acts normally, on a 1-3 it may not voluntarily move, shoot, or charge.  Note they can still attack in close combat if already in it, they just cannot charge.  Also note that techpriests do not have to be with the unit, not that there is a great reason not to.  You can shenanigan it by having the priest leave the unit, as the start of their turn has passed so they would be good for that turn, and beginning of next turn move the priest back into coherency before you use the servitors.  This is useful if you need the priest to go repair a vehicle but still want to shoot with the servitors.

Overall the techpriest is a good and flexible unit that really helps out mech and armored forces.  With 7th being much harder to one shot vehicles, having a few tech priests will significantly boost your stay time on the battle field.  They will get the most use out of heavy armor, as there is much less that can glance it to death so you'll be able to repair it after it takes damage.  Sticking a techpriest with a  few gun servitors nearby a leman russ squadron will significantly boost the squadrons survivability, and the priest can jump on a unit trying to charge the tanks if it has too.  They aren't great at CC, but servo arms are power fists essentially so the hits you do get will be killing most things.  Don't expect them to wipe the floor with anything, but if you need your russes to survive a few more turns, throw the techpriest and his servitors out there to protect their precious machines.

Awaken is something to make use of though it is limited, on ordnance wielding russes, this helps you to fire the hull weapon at full BS, or at units that have moved at cruising speed and are not fast.  Note that awaken does not state that you must be dismounted to use it, so their is nothing to stop you using it inside a chimera, or even a valkyrie for that matter.

When taking them, I would just about always take servitors with them.  Taking 5 is a very good choice, with two as weapon servitors.  With three servo arms, you'll be passing any repair on a 2+ and still have two guns to shoot.  Your best choice for weapons are plasma and heavy bolters, one shot weapons on a bs3 model is not the best, heavy bolters and plasma cannons have much higher chances of doing damage.

Now that they can score as well, there best use is staying near your critical vehicles near a backfield objective.  If you spend the points, bring along an extra chimera for them to hop into, they can't take a dedicated transport on their own.  That way the gun servitors can fire and the priest/unit can hop out to repair the nearby vehicles if needed and can still cast awaken.

Another good use of awaken is on wyverns, with their range you'll find that you sometimes need to move them.  They can move 6" and still fire one of the stormshard mortars, with awaken you can move it and then fire the other (at another target if you want).  This can be really useful if you have a few tehcpriests near a wyvern battery, you can move them and shoot effectively or have have them essentially split fire.  This can be really good as often the wyverns can overkill a unit and there are others you want to kill, with awaken you could theoretically target 4 units with three wyverns and three techpriests.  Now thats not the best way, but with two of each, you can split the shots between two units.  If only barrage still caused pinning *sigh*.  And realistically this is not a large investment of points, with 80 for two techpriests, and you prob are taking the wyverns anyway.

The splitting fire option is probably the best use out of a techpriest, using machine spirit to spread fire and prevent too much overkill.  This is even good on standard leman russ squadrons where you may be wanting to spread the large blast love, and is actually more reliable than the tank commanders split fire order.  Really its actually quite a useful power as I have had it happen where an artillery has been shaken and now it sits there useless for a turn, hoping ti doesn't die the next turn.

Overall the techpriest is a great support unit and should be strongly considered for any army that is making use of vehicles, especially heavy or artillery.  They are a small investment and can survive quite well if, as long as not placed to carelessly.  They can advance with your vehicles to provide support and a unit of serivtors can act as an annoying backfield unit that can camp an objective and help the priest repair vehicles.  All in all a good improvement and a good unit to be seriously considered.

GG
Posted by Grumpy Guardsman at 11:42 AM