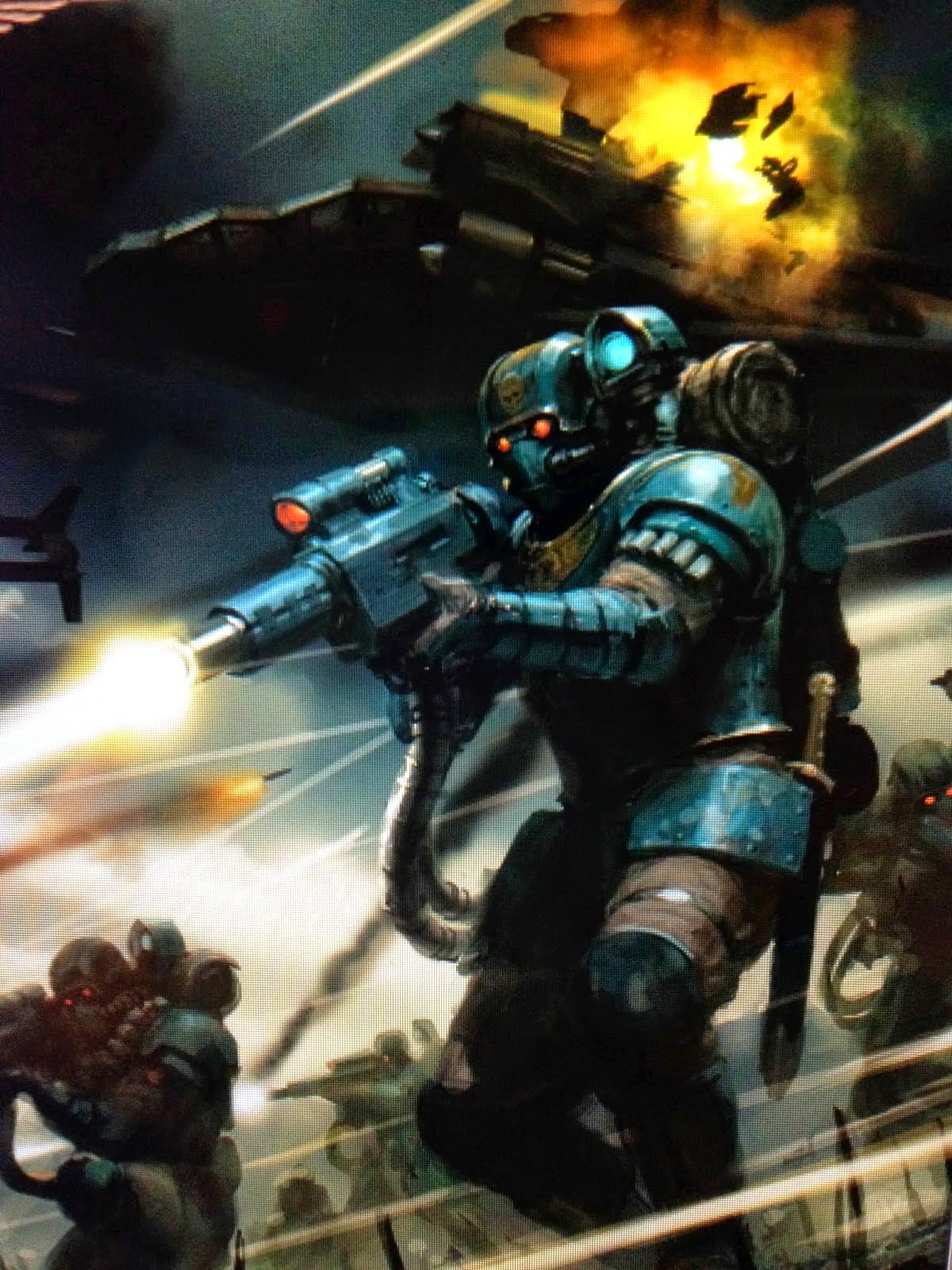 I have been on my Scion kick for quite a while now, with no sign of stopping (I just bought the Storm Scion deal, more to follow on that).  In my recent tournament experience I got to test my Scions against some serious enemies, including a seer council, really just a lot of eldar and some Tau.  Which are powerful enemies to be sure, but I still have other tough ones to face and see how they do.  Despite that I have found them to be a tenacious army that keeps on punching till the end.  They are tough to use right but when done so they excel.  Now the big question is whether to take Scions out of the main IG codex, or out of the MT codex.  The answer to that depends on what you want your Scions to do.

I have been regularly using them as my main army and have done well with them.   The main weakness of the army is in lack of heavy weapons and limited options.  Their strength lies in their orders and warlord traits (most of them), plus having 4+ save bodies running around with AP3 guns.

Before we go too deep, we should look at what the Scions themselves are, and what they do well and then look at how they fit into each army.  Off the bat they are basic veteran guardsmen profile with BS4 and Ld 8 for Sgt(tempestor or whatever).  They have Carapace armor and Frag & Krak, hot shot lasguns, and the Sgt has pistol and ccw.  They have the move through cover special rule, which has some important implications.  The Commander (prime) has Ld 9 and clarion vox net which gives scion units within 18" his leadership for tests besides orders.  The command squad can take same upgrades and such that platoon command squad can take, with weapon options being limited to scion weapons, no heavies.

What you have then is decently durable squads that have good basic weapons with two special weapons based on role that have good leadership and can move through cover.  They are best used with mobility in mind due to the limited range (18") of their rifles.  Due to move through cover, they ignore the dangerous terrain test incurred if they scatter when jumping out of valkyries/vendettas.  This is a role to keep in mind for them.

They can take Taurox Primes as their transports, and Chimeras if taken out of AM.  Since their minimum squad size is 5, they can also hitch rides in vendettas.  The next big thing that affects them is orders.  This is where the scions change and have certain advantages.

With MT, you have twin linked, which eliminates the need for prescience(but not necessarily psykers).  You have sniper and pinning(showing this was written with 7th in mind), rending against MCs and vehicles, preferred enemy, crusader, and fleet.  So out of MT what you really are getting is force multipliers that take the scions weapons over the edge.  The sniper order is great for targeting units of T4 or higher with 3+ save or higher, Rending is great for giving you an edge against vehicles and tough MCs. Note though when fighting a wraith knight that the sniper order is better as your ap is already good enough.  Preferred enemy is good for plasma weapons, ensuring you hit and wound most of the time and lessen the impact of gets hot.  Crusader and Fleet are good if you occaisionally need the bonus in CC or running, and will be useful when you need to move and have no significant targets.

With MT the focus of orders is on the Scions themselves and it really does give them an edge that they do not have in the AM book.  The rending and sniper/pinning orders are some of the best, allowing you to wound high toughness models reliably and give even hot shots a chance against vehicles when done right.  So if you are taking them out of MT, you are building squads that are going to be hunting tougher units and making good use of plasma and melta.

With AM you have pinning, which isn't bad, precision shot, split fire, shoot and run, tank hunters, ignore cover, get back in the fight, first rank, and move move move.  Now the big ones here are split fire, shoot and run, ignore cover, first rank, and tank/MC hunter.  While the precision and pinning aren't bad, the MT order is better, as it is straight sniper and includes those rules as well and has the bonus of wounding on 4+.  The shoot and run is an advantage for valk dropping scions, as they can fire their weapons and then run to spread out, so if you are considering a significant number of these guys, you should consider bringing them from the AM book.  First rank is good as it boosts your number of shots, but most of its effectiveness is only going to be seen on T3 units, and somewhat on T4, above that the other MT orders are better.  If you are using them against lots of infantry then taking them out of AM is a good choice, but if you are facing lots of marines and T4 and higher armies, then MT edges it out.  Split fire is pretty self explanatory, you shoot at different targets, its nice situationally and is also good when dropping out of valks to hit multiple vehicles.  Tank hunter is good but limted effectiveness to scions as they only have a few weapons that can take advantage of it.  Against MCs, rending or sniper are better orders, as for rending you'll need 6s to wound most MCs anyways with hot shots, might as well get ap2 into the bargain.

As you look at it, there are definite roles that scions do better based out of the book they come from.  Scions from AM are better when using valkyries or vendettas, MT are much better monster and vehicle hunters.  AM can get larger volume of fire against T3 units, are about even at the 9-18" range for T4, but better once in 1-9" range for T4.  AM scions are better generalists while MT are better specialists.

For most cases taking them from AM will get the job done, but they will lose effectiveness against tougher targets, so I would recommend as small detachment of MT scions specifically for monster and vehicle and character hunting.  When it comes to supporting them, then it depends on the army.  If you are going with the main AM book, then the Scions themselves are there as a support, as a strike force to take hard objectives.  Out of MT they take advantage of objective secured and will be tough to move but lack in long range support, which you will need Tauroxes, valkyries and maybe some AM artillery to help out, though the last is not necessary.

How you need to look at it is what do I want my scions to do, as each works well in different situations.  The MT orders are really good and when used properly, the scions can deal with most threats, except for horde units without additional support.  The AM are superior drop troops and dealing with larger units, but will struggle against higher toughness and have a harder time knocking out vehicles simply due to the number of weapons that can harm a vehicle.  There are a lot of other things to consider, but these are the main ones and it is important to note that there is no clear answer to which version of scion is better.