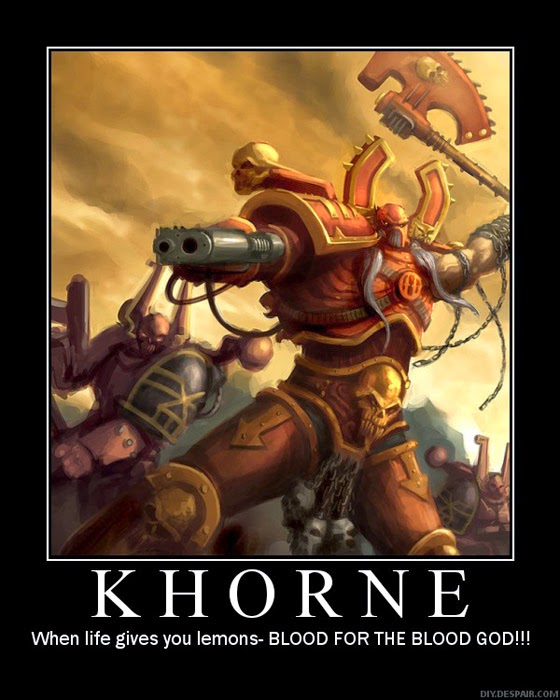 There still seems to be a lot of teeth gnashing over daemon summoning, and while it can be a potentially powerful army, its not something to be truly feared.  That army has a lot of issues and relies far too much on chance to be truly effective and I really don't see a need to nerf it through some combination of capping warp dice or other measures.


The main reason its not that great is that it is too random and reliant on lucky dice rolls.  While basice summoning is a primaris, the others are random and while sometimes the greater daemon roll come up, in other games it won't.  Many times they will be stuck summoning crappy units that can only really summon more and hope to not get killed.  Added to that is the fact that psychic powers are a lot more reliant on chance.  As WC 3 powers, these will have issues reliably casting and have much higher chances of periling.  So while that army can produce a lot of dice, its going to be using most of it just trying to bring more guys in.  When the stars align it can certainly be hard to counter, but most cases it will be lackluster.

Another of the problems is that its just not that great or fun of an army to play.  The people I have talked to that played it did not seem to enjoy that army.  It can be nice when you need an extra unit or two, but an army that can only really summon mediocre units is not something to bet on.  Horrors are good as batteries and sitting on objectives, but they really don't stand up to much in a fight, both at range and CC.  The occasional greater daemon will certainly be a big deal, but again that is reliant on chance working in your favor.

Added to this is that many armies can counter this pretty well.  The Imperial Guard, Tau, Eldar, and any shooting heavy army can put out more than enough long range firepower to hurt this army before it even gets off the ground.  So he rolled the greater daemon power, well you know what unit to kill first.  Even medium ranged armies can do well, Space marines bring a lot of shooting once they get close and are more than durable enough to roll through most of those units in CC.  And then their are grey knights with mindstrike missiles telling those psykers to die.  As an army there are too many out there that can counter it to make it one that is going to see a rise in the meta.  Will summoning still happen, yes, but an army built around it will sacrifice too much to be seen as common place.

So while there will be some armies that have trouble against it, there are many that won't, and that alone will be enough to counter a large shift towards this army.  You'll encounter it from time to time, but it won't be the daemon players go to.  My advice is to let it ride and let things settle out, a nerf is most likely not needed and other factors will even things out.