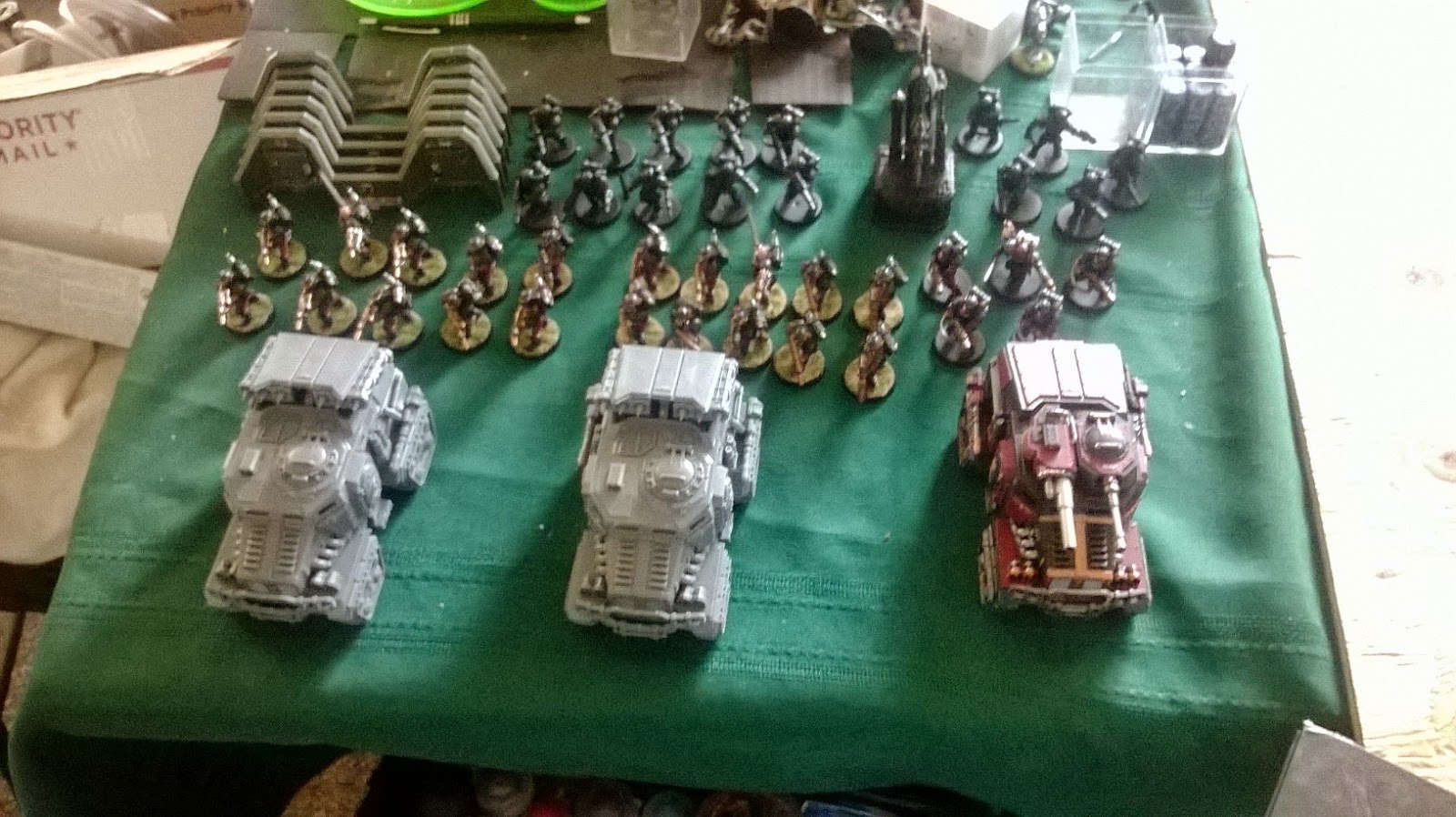 Rematch time.  Now the Scions are back for revenge.  The Mek's forces are growing and the Scions have brought their full force to bear to kill the Mek before a full blown WAAAGH! can erupt.  The game was 1000pts and I had a command squad with 4 volley guns with my warlord and a second with two melta guns and a power sword.  I had three scion squads, two with plasma guns and one with melta guns.  Then three Tauroxes as FA, one with battle cannon and two with missile launchers and all with auto cannons.  The growing ork forces had three killa kans, looted wagon with kannon and all the trimmings, 12 hard boyz in a truck, 12 shoota boyz, 30 choopas, 3 warbikers, and a big Mek with shock attack.  I also brought along an aegis line to add a forward strong point

The mission was the scouring, we each spread our objectives across our deployment zones.  I placed my aegis in the center in a U with it slightly forward for my squads to advance up to.  We had a central LoS blocker, with good LoS blocking terrain in each zone, something that I strongly recommend for all games, it forces both sides to maneuver and prevents gun lines from shooting with impunity.  Big Kev got first turn (again!)  I failed to seize (again!).  He placed his truck and 12 shoota squad on my left, bikers and kanzs in the center with the mek and his large mob and wagon on the right.  I deployed my warlord and one plasma sqaud with cannon taurox on my right in ruins, one missile taurox near my center with my second plasma squad and command squad.  My last squad was mounted up in my other missile taurox on my left.  My warlord trait gave me Ld 10 and he rolled the acute senses for outflankers(not useful). 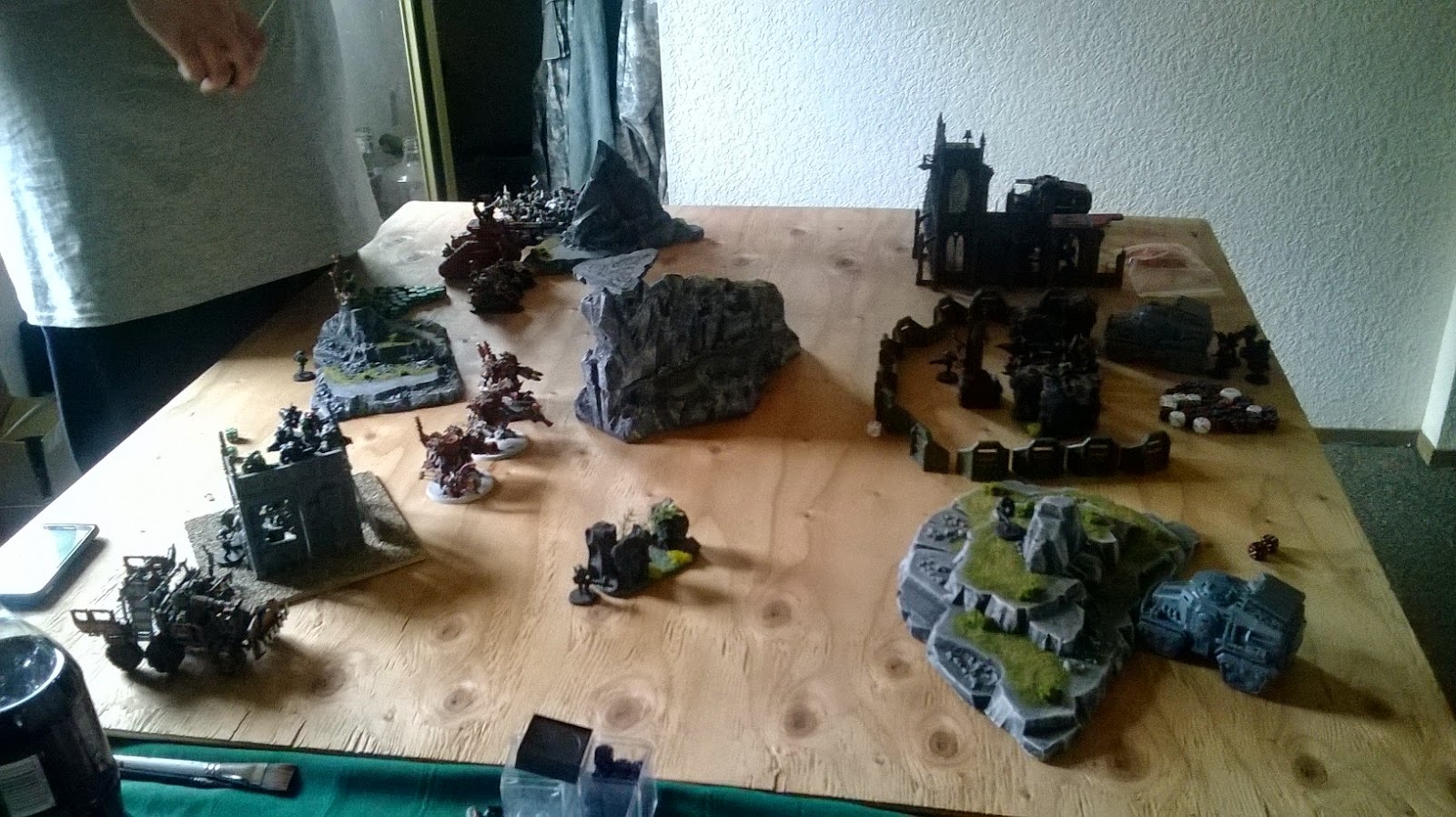 First turn the truck moved up, bikes moved behind the hill in the center, kans advanced as well, hugging the hill.  The big squad of boyz spread out.  The mek was on his own in the center.  His wagon fired and missed my squads and taurox on the right in the ruins.  Next his mek opened up with his shock attack, and he of course rolled a double 6, sending half my plasma squad screaming into the warp and melting the heavy stubber on my taurox and taking a hull point off.  Thankfully the double 6 does not insta kill vehicles otherwise he would have had first blood. 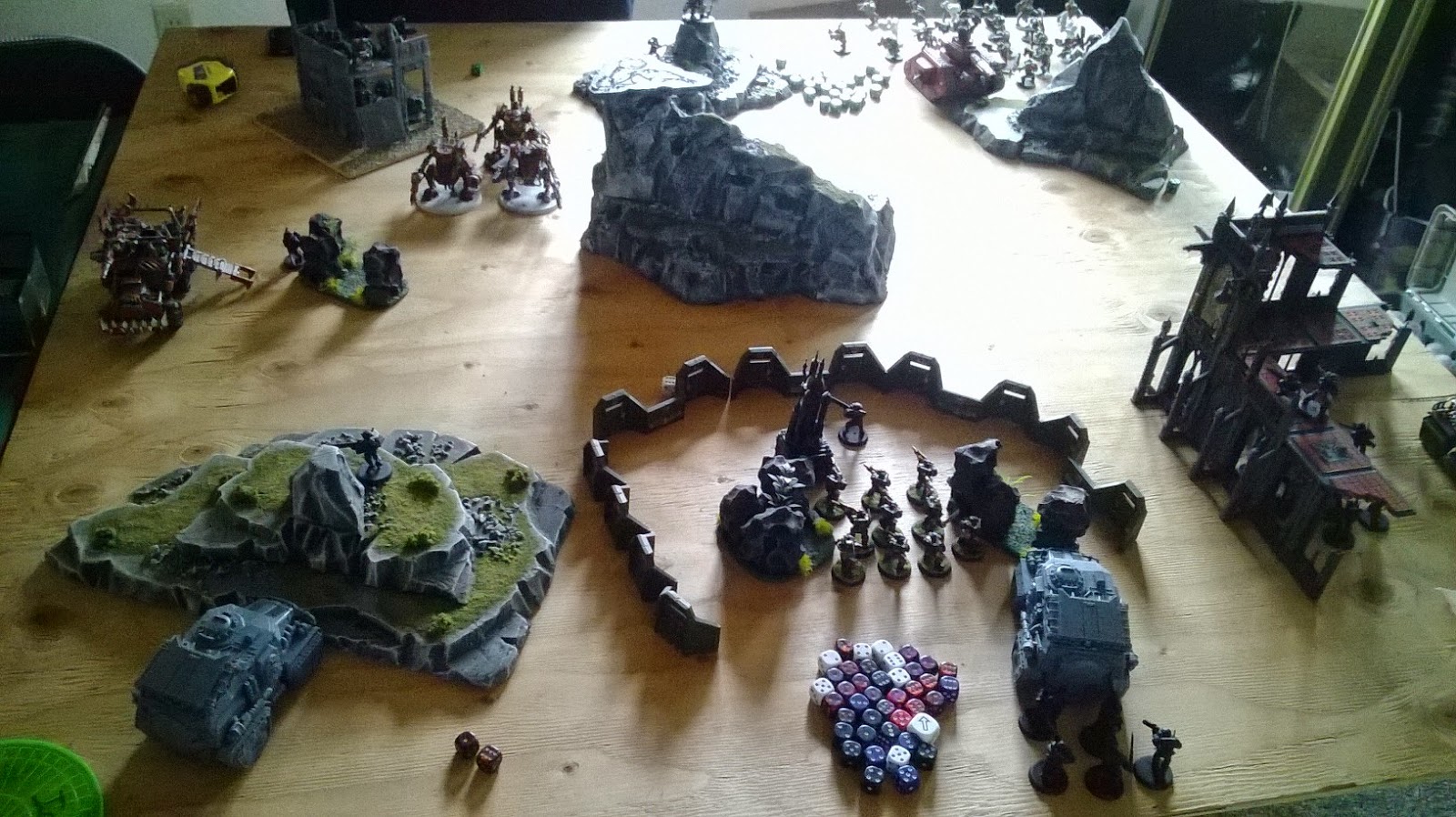 Luckily none of the plasma guns were dragged into the warp.  The squad passed its leadership.  I moved my taurox in the center out of cover for a shot at the mek and moved the other out to line up on the truck.  My center squads moved up to man the aegis.  For orders I gave rending for the plasma squad to shoot at the kanz, getting a rend with a hotshot and knocking a hull point off of one.  The taurox killed the mek, getting a missile through his invul and insta gibbing him for warlord and first blood.  The other missile taurox took out the truck, but he rolled awesome for his kareen roll and ended up right in front of my aegis, with only one boy dieing in the process(damn).  My second order was twin linked on the plasma squad in the ruins, and they rolled hot exploding the wagon.  All in all a great first turn for me. 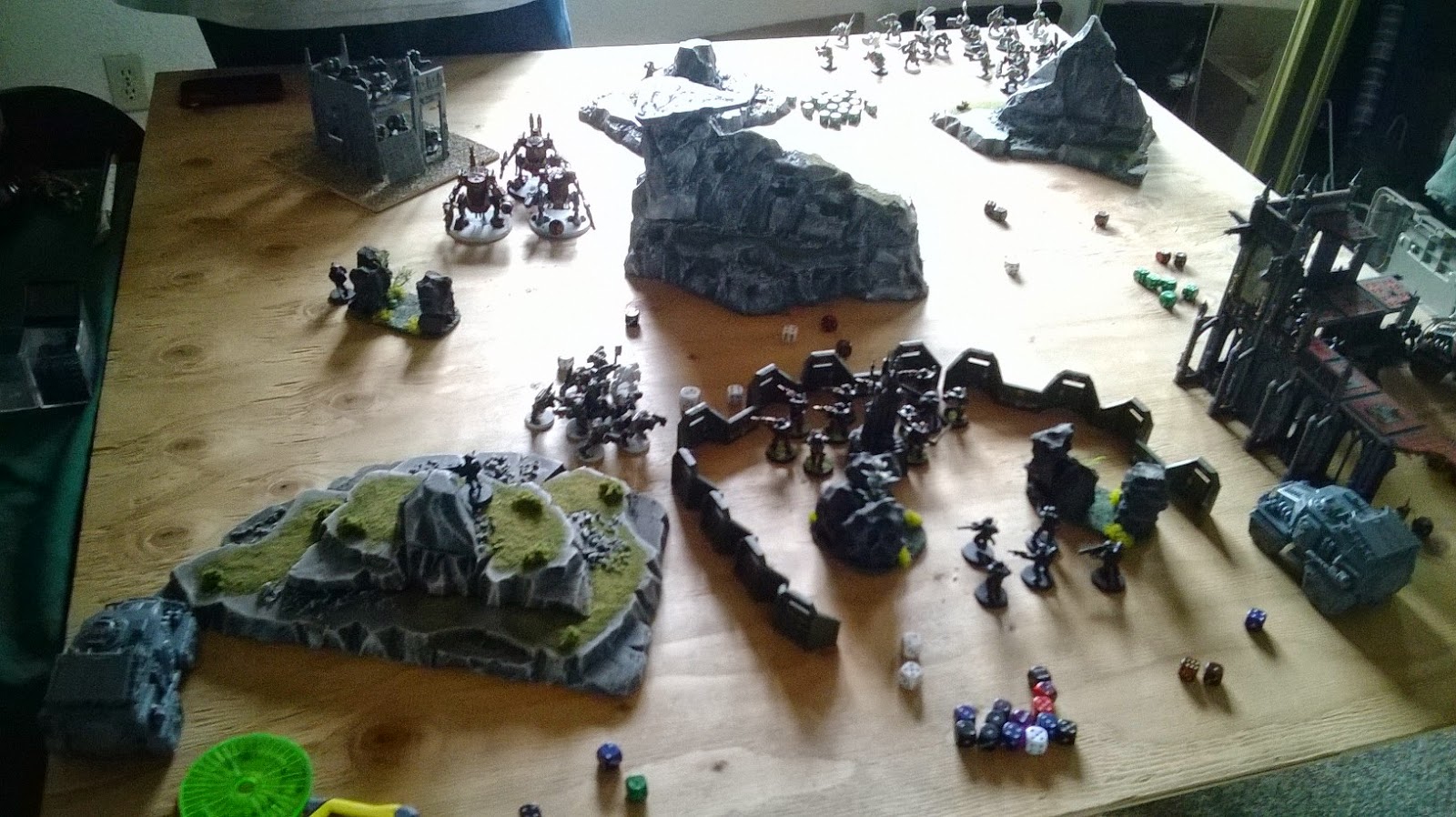 His second turn, his boyz hopped over the wall to go after my command squad.  His kanz moved up to open up on my center plasma squad.  His bikers moved out to attempt to charge my cannon taurox in the ruin.  His big boyz moved towards his center objective.  His grotzookas opened up and he rolled hot, getting a total of 24 wounds on the center plasma squad.  I went to ground for a 2+ and lost only 3 guys, and passed leadership check.  No get back up in Scions, but I was ok with that, they were alive still. He popped his WAAGH! and his boyz charged my command squad, I killed one, he wiped them out.  Luckily it was not my warlord.  His bikers failed their charge thankfully. 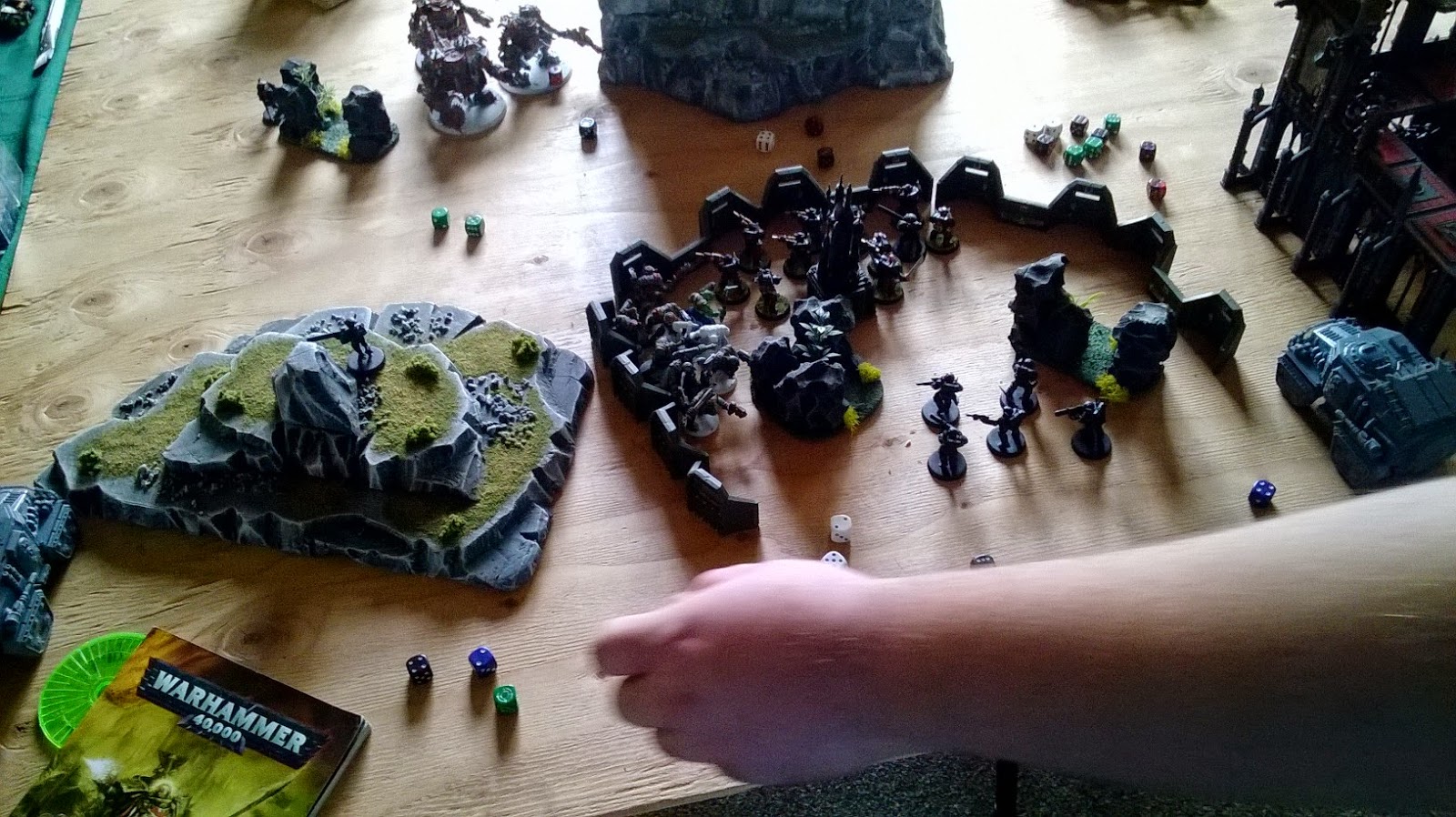 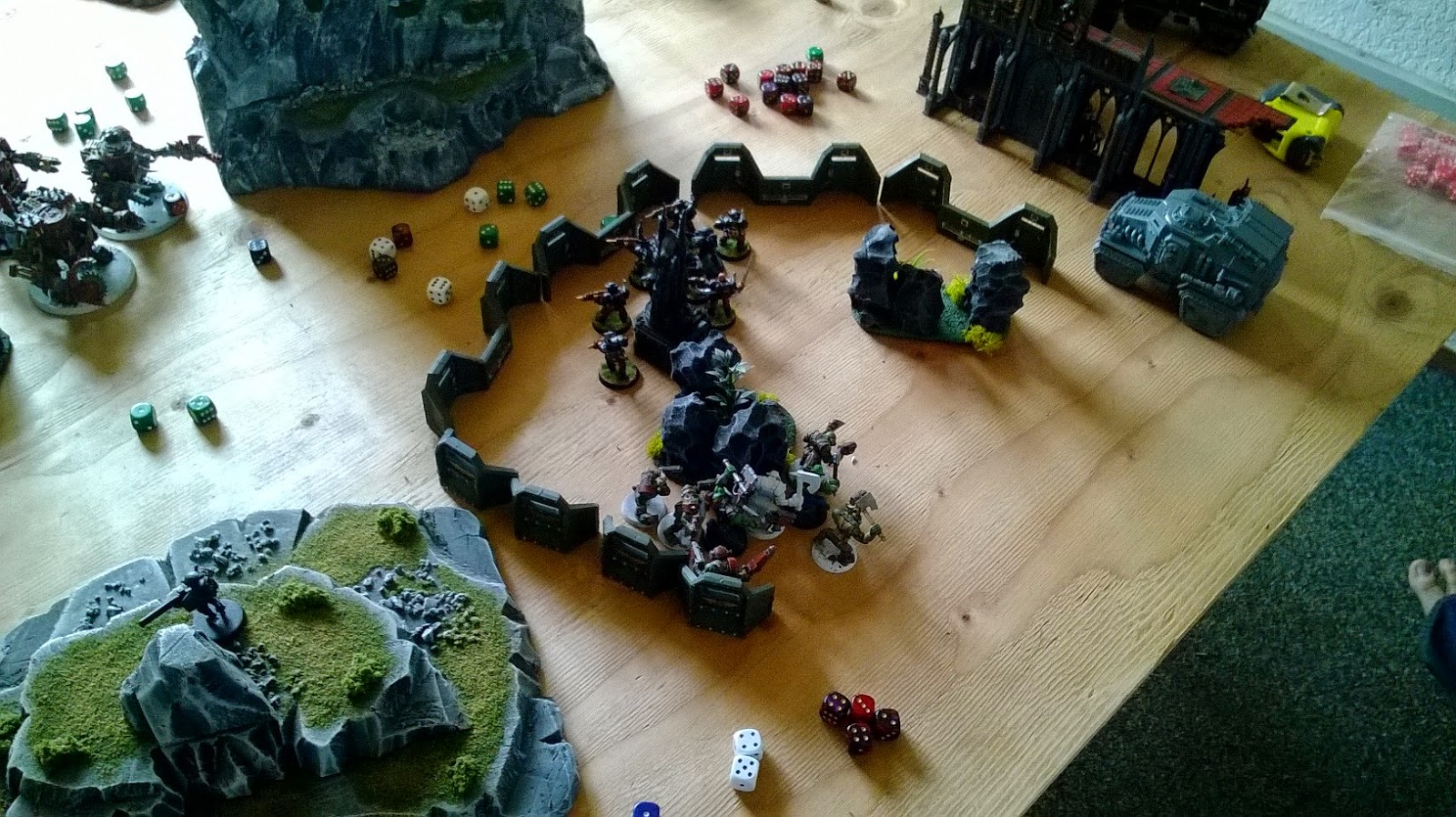 My second turn I moved my tauroxes out and disembarked the melta squad to deal with the rapidly approaching kans.  I ordered my plasma squad twin linked again and they wiped the warbikers, he failed all of his 4+ saves.  My plasma was hot.  My melta squad and their taurox finished off the kans with their fire and combined fire from my volley guns and missile taurox killed all but one of the hard boyz.  The remaining boy passed his leadership. 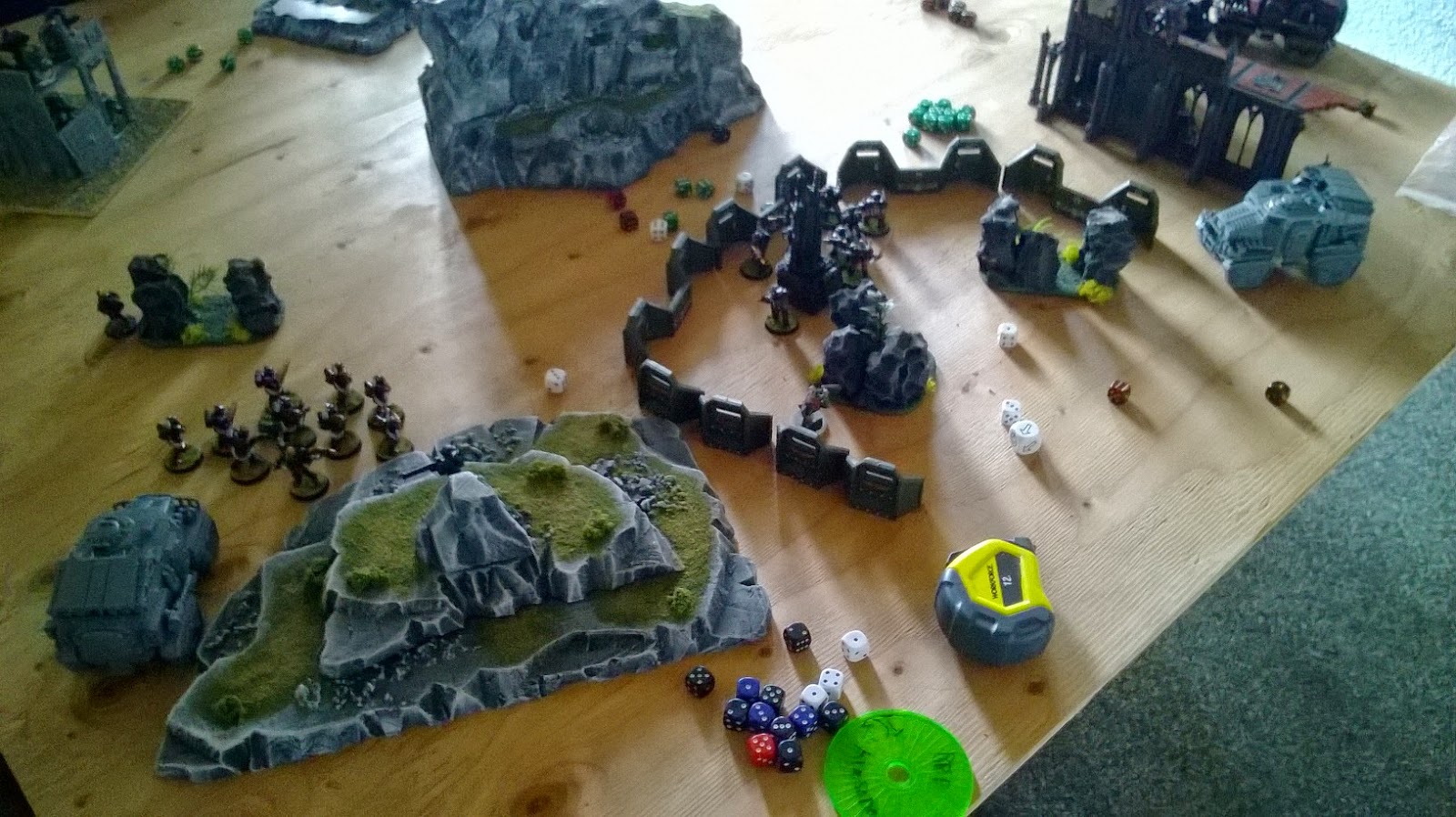 He moved his lone boy back towards my melta squad and consolidated his large boy squad onto his central objective.  His shootas were in range or my melta squad and he rolled hot, killing 5 of the squad, they passed their leadership.  His lone boy then decided to charge the squad, surviving overwatch but was brought down by the weight of attacks from the scions. 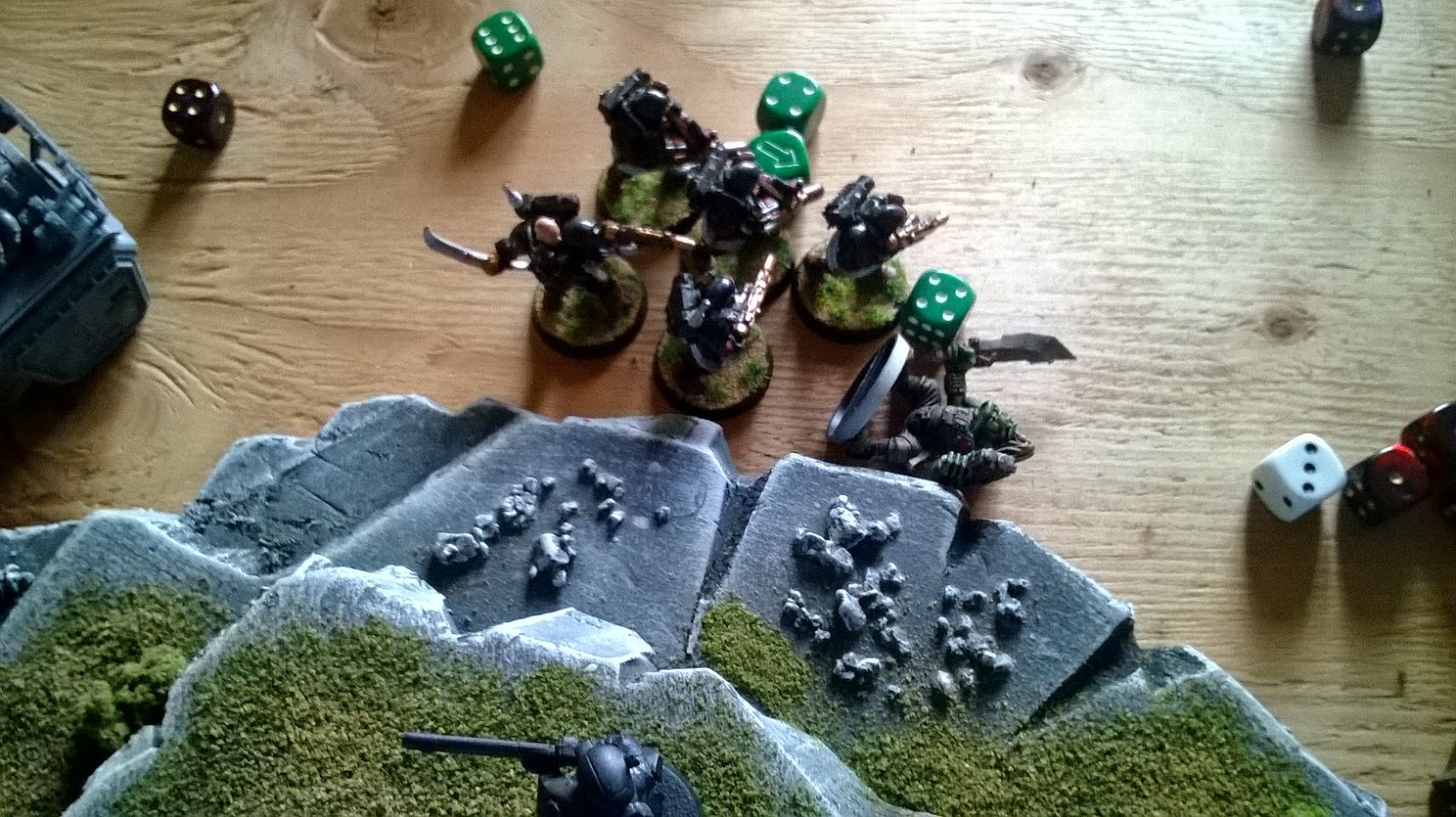 My scions loaded back up into their taurox and it moved up to line up shots on his shootas.  My plasma squad loaded up into the cannon taurox and it moved forward.  My other missile taurox moved to line up shots on his shoota boys.  I ended up killing 5 of the boys to combined missile launcher and autocannon fire, though they passed their leadership.  The cannon taurox focused fire on the center boy squad, killing 6 that were in the open.  At this point we called the game, I had warlord, first blood, and a scouring point for his bikers.  Plus two objectives worth 4 pts.  He had two worth 5pts. 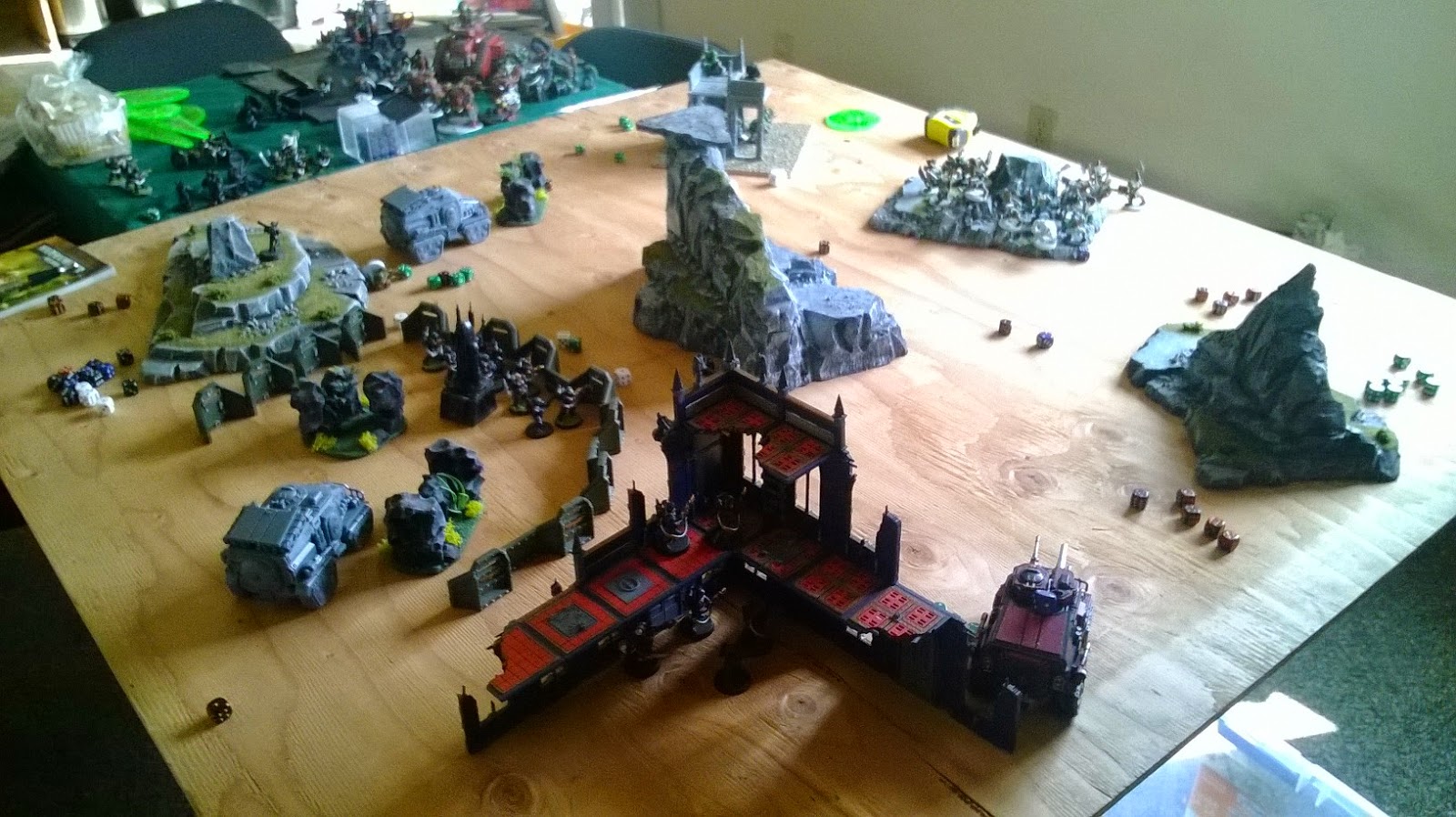 He took a risk with his mek leaving it in the open, one that did not pay off, he was hoping for having too much targets to shoot at but my first turn shooting was hot, killing just about everything I shot at.  He prob should have moved his big boy squad forward to threaten me instead of leaving them back.

Other wise I am really liking the Scion army.  It is very mobile and has some really good shooting.  Taurox primes just do work, and I love the missile launchers.  Terrain is their friend and having such a flexible transport with great firepower adds a lot to this army.  It hurts not having more orders, but at 2000pts this becomes less of an issue with 4 HQ slots.  I am seriously considering taking this army to the golden throne GT just to have fun with it.  They are a good army, if unforgiving to mistakes.

Ahh it was good to get revenge and I am now getting a good hang on these guys.  Plasma is your friend and this army can be very mobile and hard to pin down.  The orders are great and you can hurt just about anything with your hotshots, making up for some of the lost heavy support.  For most though, you'll be fine taking these guys out of AM, but they are still good on their own.

Posted by Grumpy Guardsman at 9:25 PM