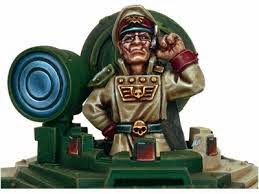 Ah the new kid on the block, and he sure is a big boy.  The latest addition the Imperial Guard HQ section is the Tank Commander.  Probably going to be the biggest change to IG in a long while and going to be seen very often on the table top.  The tank commander himself is pretty simple, he is an HQ choice, a 30pt add on to any leman russ variant you choose, and you have to take at least one other leman russ with him with a max of two for a total of three russes in the squadron counting the tank commander.  But that is not all the commander brings.


It is important to note that the commander is a character, has BS 4 and can be chosen as your warlord.  When rolling on the warlord table, he rolls a D3 instead of a D6, though the three that they can get are good and useful for a tank commander.  The last thing a tank commander brings is Tank Orders.  Work just about the same as the other orders except that it can only be issue on his squadron.  You need to roll a 9 or less for the order to be successful.  There are three orders.  The first is full throttle which allows the squadron to move flat out at 6" + D6" even though they are heavy.  Gunners kill on site, basically its a split fire order.  The tank commander MUST fire first and at a different target.  Also the following shooting attack from the remaining tanks must fire at a different target and it cannot be a unit that was forced to disembark from the commanders shooting attack :(.  The last order is strike and shroud, simply your squadron fires and then pops any smoke that has not already been used.

These are all useful if some only once, it is unfortunate that orders can only be used on the tank commanders squadron and not on others.  But it is what it is.  Strike and shroud is actually pretty useful but will require skill and timing to get good use out of it.  I am happy to have full throttle, any opportunity to make the plodding russes move faster.  The middle order though is going to be the most used, and is good especially in a full squadron.  Allowing the BS4 tank to take out one target and the regular BS3 tanks to combine their shots on another, its good in that you probably won't be needing to use prescience on them, but it wouldn't hurt either.

So with the orders in mind, how should the squadron be built?  Well there are two ways, one is to have the commander armed differently but supplementing the remaining russes.  The other is to keep similar armaments and focus on the same targets.  Each has there merits and it is going to depend on the role you are going to be putting them in.

Now one way that I personally like is taking the Vanquishers.  They are my personal favorite russ variant, I know not every ones.  With the new points changes it is now possible to have a fully kitted out vanquisher with multi meltas and lascannons for only 165pts.  Yeah that is not bad.  Three of them will kill just about anything in a round of shooting, especially if prescience and with orders, you can take out multiple targets a turn.

If going second, you can keep them in cover, then in your turn move out and pop smoke and shoot.  Then you can split fire next turn taking out targets, then next turn move back into cover or advance on new targets.  How I see the tank commanders is making sure to build the squadron to make use of the orders.  Or to make use of the BS4 and take the minimum one other russ to follow it around.

Another good load out is to take a punisher as the commander with two exterminators as the second tanks.  These complement each other, and the punisher gets the most use out of being the commander.  They can hurt similar targets but you can split fire if needed and have the tank commander target infantry and the exterminators go  after light vehicles.

Now Pask is important to talk about as he is an upgrade that adds a lot, but only if you are taking him as your warlord.  While he is good, he is expensive for the crack shot rule only if you are not using him as your warlord.  Pask adds a special rule depending on the turret weapon of the tank and also rerolls penetration rolls.  For punisher and exterminator its rending, the executioner has a large blast blind version, and the rest reroll misses.  The important part is the old grudges warlord trait, which allows you to choose one codex that you are facing, and gives the warlord and unit preferred enemy.  A plasmacutioner squadron with pask is very deadly, having rerolls of ones meaning very little chance of getting hot.

Pask is good, but he get expensive so really think if you need him.  Most times the standard tank commander will be more than enough to do the job.  Another squadron that can work well is an eradicator as the commander with two demolishers.  They got more expensive but don't bother upgrading them.  Use you orders to get close and go flat out turn one.  Three AV14 tanks barreling at your opponent are hard to ignore.  They will most likely survive the fire and next turn you will be within the tanks short range to be effective.  The two demolishers can target vehicles or heavy infantry and the eradicator can shoot at another.

As to how you should be building the army around the tank commander, there are a few ways.  What will probably be the most common is the tank commander and CCS as HQs, allow you to decide which will be the warlord based on who you are fighting.  This is a flexible and gives your russes that you do bring an advantage.  Now you can build an armor heavy army and this works well, if going this route you can double up on tank commanders, since you are bringing a lot you might as well have two squadrons that have better shooting and orders.  When bringing other russes, support what the commanders are loaded out with but also cover their weaknesses.

The tank commander over all is going to seen in a lot of lists.  From just token leman russes to full on armor lists.  These guys are here to stay and there are many potential options available to them and more and more tactics will appear as time goes on.  They are a finesse squadron and find ways to make use of their orders to get the most out of them.  The tank commander can be the star of your army or the supporting element, or you can bring twins.  In either case they will work well.  Pask is worth taking if you are eying him as a warlord.  If not keeping the standard commander will give you what you need.