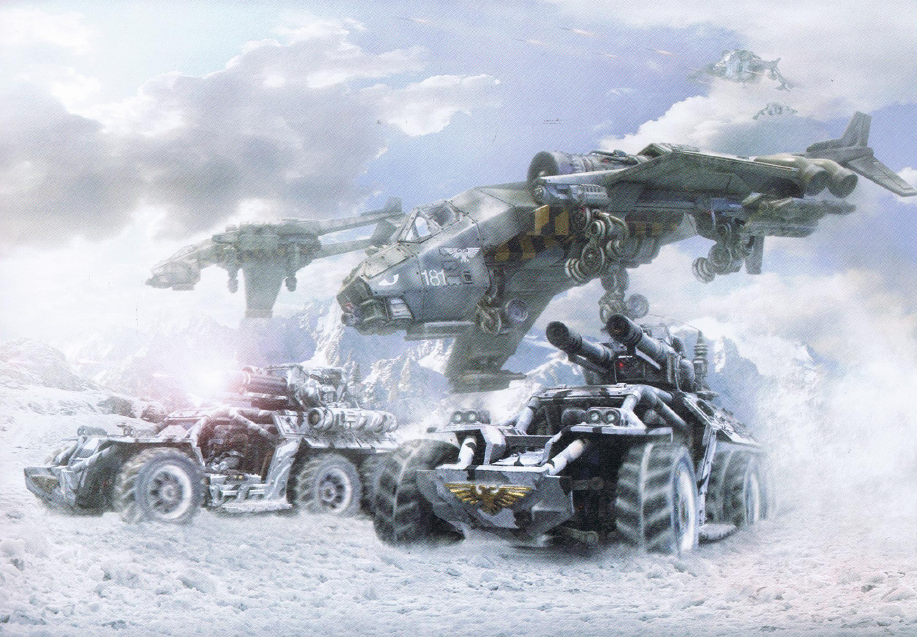 To continue with the Forge World theme, I will be going over the Tauros, a light attack buggy that is a favorite of the Elysian Drop troops.  For use in 40k it counts as a Fast Attack choice for the IG, and is a good option because of its actual ability to maneuver and shoot well.  There are two versions of it, each with slighty different options but overall they are pretty much the same vehicle

Standard version first.  The Tauros can be taken in squadrons of 1-3, are a fast attack choice and come in at 40pts a apiece, with armor 10 10 10 and 2 HPs.  Standard IG BS 3 and it is an opened topped vehicle that is fast.  It has Scout, All terrain vehicle (slightly different than taurox version) and galvanic motor.  Galvanic motor allows the Tauros to ignored immobilized results on a 4+ and all terrain lets it reroll dangerous terrain tests while at Combat Speed, not all the time.  It comes armed with a heavy flamer and searchlight.  For 5 pts it can upgrade to a tauros grenade launcher, which is a two shot grenade launcher with a 36" range, but otherwise same S and AP for the frag and krak grenades.  So thats 2 S6 AP4 krak shots or 2 S3 AP6 frag blasts per truck.  For 45 pts really not bad.  The heavy flamer isn't a bad choice either especially if you want to use a squadron to outflank.

The Venator is an upgrade.  For 20 pts it gets AV 11 on the front and a TL multi laser replaces the normal Tauros armament, otherwise its the same vehicle.  It can upgrade to a TL lascannon for 15pts.  This gets spendy now as you have a pretty weak 75pt model.  Granted a TL lascannon is nice but not sure if this is worth it.  For me I like the TL multi laser, this gives you a lot of shots with great mobility and range in a squadron of three.  And its important to note that these are pretty small vehicles, easy to hide and with the weapons at the top, its really easy to get cover but still shoot over it and not give it to the enemy.

Any of the Tauros can take one HK missile for 10pts, extra armor for 15, smoke launchers for 5, and camo netting for 10.  Thats per model.  Only one that I would consider is camo netting, and prob only on the standard tauros as their cheap enough that it won't make them too expensive.

Tactics wise I have never used them, so its all theory hammer, but its not hard to think on how to use them.  I would love to hear comments on those that have used them successfully.  For me, there are three that I would use.  The standard with heavy flamer, maybe camo netting.  The grenade launcher with camo netting (maybe), and the standard venator with TL multi laser.  Lascannon is nice, but IG have other and better ways to deal with armor in that way.

I would use the heavy flamer in a squadron of three and out flank them almost ever time.  They can come on 12" and roast a unit or an opened topped transport and murder the squad inside, especially brutal against dark eldar and orks.  They have the same stat survivability as scout sentinels but their height means they can hide much easier from reprisal.  Pay attention to terrain to screen them from retaliatory fire.   With camo netting to they can hide in terrain with a pretty darn good cover save that most armies will struggle against or be forced to waste a valuable.  Their base is bigger than scout sentinels though so while their height is an advantage, their overall size means you'll have to watch out for charging units as they take up more space.  These work as a cheap and mobile spoiler unit that can move rapidly around the back field and draw fire away from your valuable unit.  With scout and being an actual fast vehicle, these guys are nicely mobile and can cover a lot of ground that a scout sentinel simply can't.  These are perfect line breakers, where unlike sentinels, they can actually get away once they get in the back field.  Otherwise they are pretty weak so don't expect miracles from them but at either 120 or 150 (if you give them camo netting), you still have a small expenditure for a very valuable unit.

The GL version I like as a decently cheap unit with decent all round shooting.  Yeah S3 blasts aren't amazing, but in a full squadron 6 of them will hurt a light infantry unit.  Only 5 pts more than the heavy flamer version, its still decently cheap for a fast unit that can move around quickly and shoot at range.  6 S 6 krak shots aren't bad either.  This one though is the least accurate as its not TL nor have a template.  So keep that in mind.  This does hurt it somewhat, but still is useful.  Use it as bait.  Deploy it out in the open, then scout redeploy back into cover or behind terrain.  Put them in a position to cause your opponent to deploy to react to them and then put them in a better spot at the start of the game.  Out flanking is also still a good use of them, if not as great as for the heavy flamer version.  I like them still, though would put them at third in my choice list.

The standard venator is next and I really like it.  At 60pts its not the cheapest, but with a pt better on the front armor to help out.  The TL multi laser is what I like.  A squadron of 3 has 9 TL shots that have good range and can move fast around the battlefield to get side and rear armor shots and get around tough tank characters.  Its important to not though that you do not have to have a squadron as all venators or normal tauros, you can have one venators and two GL tauros, or any combo of them.  That being said, I would take them as all three.  These are great flanking units that can scoot up the side quickly or out flank to get around tough armor.  Being scouts too, they can bait an opponent out and then hide back behind cover.

To me you have to use these a lot like Tauroxes, play them carefully and pay very close attention to cover and LoS blocking terrain.  Cover will keep them alive much longer.  The venators are expensive enough that you can't be too cavalier with them as you can be with the standard heavy flamer version or even GL.

As a fast attack choice that is actually pretty darn fast and has scout, this helps the IG get a really mobile unit with solid firepower.  The standard version I think is pretty fairly priced, though I think the venator upgrade is a bit much, especially the lascannon version.  Its an older book so unfortunately you have older rule pricing, its just the hard thing with IG FW units, they are an edition behind and reflect that in some of their pts.

That being said they are still a very useful unit, and make for some great conversion opportunities.  I have seen some pretty cool ones out there.  I would consider these guys to be a pretty solid choice, not a must take but def a very strong fast attack unit for IG that can zip around and bring some mobility back to the army.  They are hard to pin down, but are still pretty fragile.  Wave serpents and broadsides will murder them, but hey they murder just about everything so its all good.

I would love it if scions could get a version of this, as it really fits their aesthetic and has that special forces buggy feel to it.  I'll bug forge world about it incessantly and maybe their give in to me (unlikely).

Hope this gives you some ideas and please share stories of your victories with them.