The Legacy of Chapter House 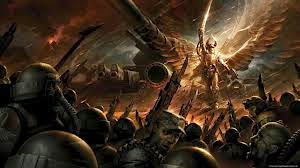 To continue off of yesterdays post, there is something else I want to talk about in regards to the Chapterhouse event.  Not going to talk about the right or wrongs and such.  Instead I want to talk about the legacy that this legal battle is leaving on the war-gaming community, as it doesn't just affect 40k or GW.  For us in 40k, we have certainly seen the direct affects of it, but it will not be confined to our little corner of wargaming.


The biggest thing that came out of the rulings is that art is no enough to protect models, nor are rules.  We have seen this with every codex release since the ruling.  No models, no rules.  I'll be honest, this does suck, as many like me were more than fine to convert our own models for this use.  But from a business perspective, I understand the reason behind it, if I don't prefer it from a hobby perspective.  My hope is that with time we will see some of these guys come back as they get to the models and throw them in a WD, data slate, etc.  Would log to have the rules for it, but GW can't defend it IP wise, so its a foolish decision to make rules and let other companies make the money

This doesn't only affect GW though, this affects the wargaming industry as a whole.  Smaller companies prob won't see too much difference, as they don't have a large enough market to worry about knock offs.  But don't expect many larger gaming companies to be producing rules without clear models or art that explicitly shows their model with rules.

While the side affects may suck, this is a good thing for the community.  Everybody knows their limits now.   GW made many ridiculous claims to IP with some of the their product and were rightfully denied them.  The court made probably the right rulings, but these now hold sway over a new era of gaming and will be with is into the future for a long time.

This won't affect historical gaming, as its pretty much impossible to copyright/trademark roman legionnaires or waffen SS.  Once you get into sci fi and fantasy, thats where you will see this played out.  Meaning say good bye to a unit that the parent company with no model.

There is going to be a lot less gray area allowed, so expect factions and units to have less general names and more unique ones, especially in bigger companies and expanding games.  This won't be universal in fantasy, as no one can protect elves, dwarves, etc as their own.

The bits industry should be fine, as long as they steer clear of directly marketing to an established game and making products for a direct system.  Most already do, so don't expect much to change there, but don't expect obvious 40k knock offs either.  Futuristic machine guns and laser guns will be fine, but don't expect a bolt gun copy.  Close is fine as weapon design is varied but similar.

The big thing here is that the legacy of this case is going to have long reaching affects, many that probably won't be understood or seen for years to come.  Many rulings were handed down, and I've yet to see and actual analysis of each one, granted many are similar.

What we know is that IP law was tested, and clarified in some ways, and in others left muddy.  This will not be going away, even after the courts finish, the affects will be with us an continue to shape this industry.  How it will end up is uncertain, but that it will change is certain, we have already seen it.

GG
Posted by Grumpy Guardsman at 9:26 AM