Just around the Corner 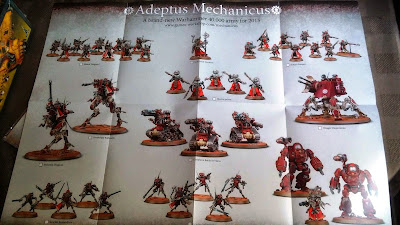 Sorry I have been gone for a while.  Life has been busy, weather is great so I have been getting outside and doing other things with my free time.  The full Ad mech is about to be out with cult mechanicus and I am pretty darn excited.  Ad Mech is def going to be my next army, but its going to be a long haul before I build it, once the codex is out, I'll decide how I want to slice it up between cult and skitarii.

Rules wise, the electropriests aren't really floating my boat.  There the cheapest, but really don't see them being too effective.  Will reserve judgement, but not sold on them, feel that at least the skitarii cc one had some help with scout and infiltrate (for infiltrators) and dunestrider to at least help them.  Have yet to see something that makes the priests stand out.  However everything else looks amazing.  Its pricey, but its so darn good.  The battle servitors look to be great, the breachers I like as they will be decent CC units and also have good ranged options with haywire.  The shooty version have grav cannons, which will prob the the standard loadout.  With the Kastelans with phosphor out the wazoo, you'll deal with mass troops with them, grav for tough units, and haywire for the pesky tough vehicles.

Overall, this army is going to rock, and combined with skitarii be damned hard to kill and just fire ungodly amounts of guns.  The formation looks good, but want to see more for sure.

Otherwise, I am in a bit of a slump.  I really don't have a direction for the IG, and while I want to do Ad mech, its going to be a long while before I get the money and models to do a full army, so they won't be around anytime soon.

I hope to figure a direction soon, as I enjoyed getting some games in again, but I just don't know.  Anyways, hope you all are enjoying your 40k.