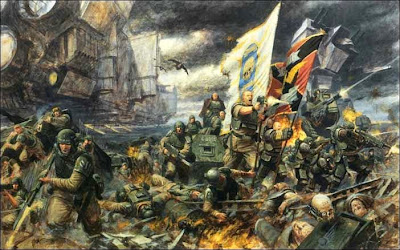 So got a test game in with my new army idea, going mech.  My buddy torquer came over and played his marines against me.  Initial thoughts is that I like the army, but not 100% on all the pieces, think there is some room to improve.  My goal right now though is to keep it IG, though flip flopping on whether the scions will stay in the IG book or as ally MT.  Will see as time goes on, each has its merits.  But I want to essentially keep allies out, so that means solving problems with this book.


What I brought was a command squad with master of ordnance and astropath in a chimera.  A platoon in Chimeras, the PCS had melta guns, three infantry squads each built the same with autocannon and flamer.  One vet squad with 2 melta guns and heavy flamer in chimera.  3 scout sentinels with MLs, a devil dog, two wyverns, two leman russ eradicators, and a tech priest to fill the final pts.  I had a scion platoon with two 5 man squads with plasma, and command squad all melta.

He brought a captain on a bike with power sword and stormshield, bike squad with attack bike, nothing fancy.  Two tac squads in drop pods, one with melta and the other with plasma.  A TH SS termie squad, though sgt had lightining claws along with a squad member.  Dread with multi melta and missile launcher.  A las pred with kronus, a whirlwind, and finally the special air formation with two storm talons and storm raven.

Most of his army was in reserve, but with three fliers, I had nothing to really touch them other than lucky dice.  We played the scouring on long table deployments.  I won first turn.  I placed two objectives in my zone, with one in area terrain within easy reach, he placed his similarly on his side.  I deployed in a long line, with the wyverns on one end behind a hill, chimeras along the whole line, leman russes in the middleish and sentinels on opposite flank with vets.  He placed his bikes and whirlwind on the flank with my sentinels, and las pred in the ruin near my wyverns. 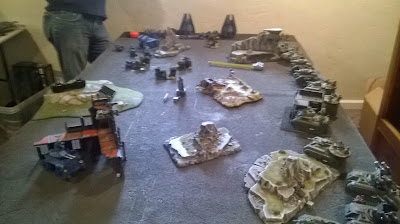 I scouted up the sentinels to get LoS on the whirlwind and then moved up again during first turn.  The devil dog moved out 12" to go after the pred, and my vet squad in chimera followed behind the sentinels.  Shooting turn one was ok, I whiffed completely with the devil dog, and got a glance through cover after multiple chimera's shooting.  The sentinels missed a bunch on their first round, but still got a glance on the whirlwind.  I was a bit luckier against the bike squad, killing two, though they stayed put.

His turn the drop pod came in dead on in the tiny corner behind my wyverns.  I wanted him to go for it, but this time he rolled a hit, what can you do.  Bikes moved up with the captain to  intercept the sentinels.  Shooting his pred wasted the devil dog with three pens, and combined shooting from the tac squad immobilized a wyvern.  The whirlwind got a glance on a chimera.  So no major damage first turn for either, though he got first blood. 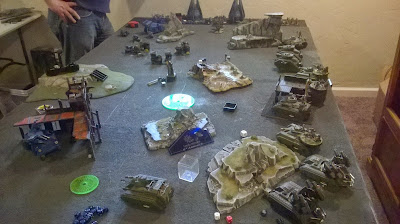 Turn two, my scions came in, with the melta command squad deep striking right behind kronus's pred, and the other two near the center of the board by his bikes and whirlwind.  Sentinels moved up around the bikes to go after the whirlwind, with vet squad disembarking to go after the bikes.  Other stuff shifted a little.  Shooting I was able to knock out the whirlwind with the sentinels, the melta scions killed the pred, and the other scions killed the rest of the bikes, leaving the captain.  The wyverns got 23 wds on the tac squad, and he proceeded to only fail 4 of those armor saves,  I killed a few more with autocannon and multilaser shots.  The captain soaked wds, making all saves.  I then charged my tech priest into combat and killed two marines.  The surviving two marines broke from combat. 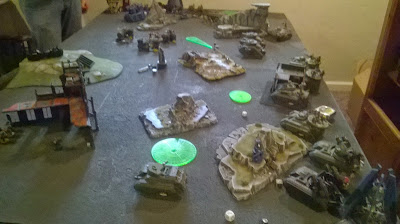 His turn, only his flyers came in, I had the -1 to reserves warlord trait (he had the extra vps for killing my warlord with his).  He moved his captain out of the noose and turbo boosted towards the leman russes.  Kronus charged towards the scions.  The flyers moved up the field, and he dropped his dread off the storm raven.  Pretty much every flyer whiffed, either failing to hit or wound/pen, and me making cover saves if he did.  The dread glanced a chimera.

At this point we called it.  The two tacs were about to die and the captain was going to take a lot of shots his way.  I had 5 out 6 objectives and minimal casualties.  While the captain would have likely wasted the leman russes, he only had a power sword so was prob only going to get one.  At this point the flyers were going to have to lift a lot of weight and he would have needed the tac and termies to come in, but the termies were going to be in the open for a turn before getting into cc.  In essence, too much to kill with too little actual objective takers left.

Plus we were hungry.

Overall, I like the army.  Thoughts are that the devil dog remains a cursed vehicle, oh well, I'll keep it just to see if it gets a kill one day.  Astropath and master of ordnance weren't terribly useful, so they prob will go to make room for a primaris.  The tech priest did fine, he repaired a hull point and killed two marines, I'm happy with that.  though I lack long range anti tank, I feel ok, I have a decent amount of melta and enough S6/7 to not feel the hurt too bad.  Lack of AA I feel is ok, as really I just need most flyers to jink.  FMCs will cause a problem, but I can ignore them most of the time till they come down.

This list gives great board control, so I don't feel bad there, and movement is good.  Having the deep striking scions as a little ace in the hole works very well and they worked well here for not a huge pts investment.  Really not much tweaking I can do here without rewriting most of this list.  Prob will end up dropping the two from the command squad, and will see if the sentinels stay long term.  They are cheap and throw away so don't care if they don't do a whole lot.  Overall, not bad, will see where this goes.