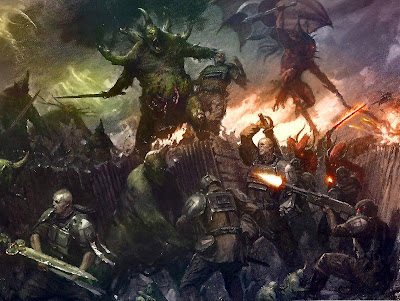 One thing that bothers me about certain competitive players and the way they play at the competitive level is how they complain about the OP armies, and then immediately take those armies, and then justify it by stating that well I'm only taking it because its the only way to stay competitive.  That BS, that's excusing lack of skill for good army choice.  I'm sorry, the good players that compete that I know, win with all the armies that they play.  What bothers me more about this attitude is that these usually are the same people complaining about how boring it is playing the same armies.  Well guess what, it starts with you, play a different army, and you know what, maybe other people will play different ones too.


What this does is create a stagnate meta with a lot of the same armies.  And here is what my problem with this attitude really is, these armies that you are playing that are claiming to need to build it the max points efficiency to the one build that wins, are really damn good to begin with.  They don't need this super points efficiency where every last drop is squeezed out of it and you have to play this one build.  NO! The wonderland that a good, solid codex, is that you can play it so many ways and its still good.

One of the guys at my store plays Tau.  But he does not play the conventional wisdom Tau, you know triple riptide broadsides and such.  He actually doesn't usually take broadsides at all, Oh god how does he win without them :o.  He takes pathfinders in devilfishes and a bunch of their special drones.  He takes Sniper Drone teams (which are amazing, I'm glad more tau players don't take them).  The point here is he takes the different units in the codex and found a way to get them to work well together.  Are they the most points efficient unit choices when viewing the codex?  Probably not.  Are they good units that still work really well?  Yes.

This is why good codex's are such a boon to the game, but so few take advantage of the true potential of these books.  Its one of the great things about the current IG codex, granted its not as powerful as yesteryear, but its still winning me more games than losing.  You can play fluffy.  You want armored death, bring it, and guess what, you can win with it too.  Mech infantry, yep, lots of light infantry, that too.  Artillery, yeah that's there.  The point is that a good codex gives you FREEDOM to choose the army you like to play.  You don't think so, talk to a tyranid or ork player, most will tell you that yeah their army can still be competitive, but there is a narrow band of competitive builds in these armies.

When you have an army like Tau and Eldar, you have armies that have great choices throughout the codex.  Why limit yourself to one build?  Bring different units, yeah bring the ones that are pretty good but not great.  And you know what, bring them to the tournament.  You know what?  You might win still.  And at least you won't be playing on autopilot, because that's what most of those top armies are.  I'm sorry its no genius who rolls a 2+ twice.  Again there is a good demon player in my area, he doesn't bring the screamer star. Does he have a good demon army that is fun to play and hard to beat?  Yes.  Does he lose more often then if he brought the Star?  Yeah, but guess what, he also gets better as a player since winning is work now.

Now as a word of warning to IG players, new and old, a new codex is coming and it will be here soon.  Do not fall into this trap and play the power build.  There is nothing wrong with maximizing the effectiveness of the army you like to play.  That is be no means what I am talking about.  What I mean is do not take the ONE build.  Take different units, find ways to make the codex fit into YOUR play style, not just what the codex is pointing you toward.  So what if one unit is super good, the others may be great too, and when used right just as effective.

Its hard for me to understand the people that play the one builds, because I rarely play one army again.  I am always changing and tweaking, and then I get a bug up my ass and I go in the complete opposite direction.  The army I am currently playing is prob the longest I have stuck with a certain build and play style.  Granted its very different from a few months ago, but the bones have changed very little.  Its just how I like to play, I like to test and tweak and fiddle, so my army changes.  I have a new armored army that I am going to be trying out next year, as soon as I finish painting them up.  Now I'm not saying you have to or should be playing different armies every few months, that's expensive and I have been playing long enough that I have enough little green men to play many different ways without spending lots.

I always will advocate that you play your guardsmen the way you want to play them that fights your style.  There are some play styles that I think IG doesn't do well, but at the same time if you don't like fortifications, don't use them just because I say that they are good.  They fit my play style but there are many other ways to play and I will certainly give advice and tips on how to make that way work for you.  Play games and have fun and always tweak, those tiny differences can make a big difference.  Avoid getting stuck with the conventional wisdom and taking the one true build.  Trust me, IG will have many ways to play it come the new codex, it still does right now.

So don't take the Cop-out and argue that need to stay competitive.  That's BS, play more and figure your army out.  Yeah you may need to buy a few models, I still have a long list of stuff I want and I have been in this for 10 years.  But don't also fall into the trap of continually buying the new stuff just because.  9 times out of 10 you can make what you have work.  If you are new to IG and still building up, I'm sorry, this just isn't a cheap army to play, even when compared to the others.  It just requires a lot of models.  But you can cut costs, buy leman russ hulls, then get multiple turrets.  You can have all the tank options, but only two actual leman russ hulls. Its great that the current kit has swappable sponson weapons.  Makes it easier because no magnetization is required :).  That is just one example.

What I can say to you is, take the risk.  Risk losing, its ok.  Winning is fun, but you know what its ok if you lose a few games.  Yeah it sucks when your starting out and it seems like you can't fight out of a wet paper bag.  I have been there, my buddy is there now, I stomp him a lot and he gets frustrated but he is getting better and has given me some close games.  Going with the excuse that you need to play the most hard hitting and points efficient list with combos that make someone cry in order to stay competitive is utter BS and lazy.  Work harder, play more, lose more.  If you are struggling, it doesn't mean its the codex's fault.  Last game I played I lost.  I didn't lose because Tau are overpowered and IG just can't compete.  I lost to mistakes in deployment, in game, and bad rolls.  Its a game and you learn from losing.   Its not the codex's fault that you lost, nor is it because your opponent's was broken.

Perhaps he was a good player, and I know this may be hard, better than you.  Yep its true, there are players that are better than you and it has nothing to do with the codex they play.  There are players that are far better than me, the Tau player in my last game is one example.  Can I beat him, yes and I have done so, but it wasn't because I had a better list than he did.  So don't worry so much about your list, make an army that fits your style and play it, play it, play it.

If you look for the easy button, please do not complain about how unfun it is when you are pressing the same button, nor complain about how boring it is.  You are responsible for the state of your game (Yes I am stealing that) and it has to start somewhere.

In other news, I have finally started painting my Bastion and other fortifications I bought a few months ago.  I have neglected my painting and have time this week so will be hopefully get a decent chunk done this week.  Will see, its big.  Prob not getting a game in til after Christmas, no one was at the shop this weekend and I'm heading out of town this coming one, so unless someone pops up this week, it'll be lots of painting.

Hope your week is going well, and I promise I will get back into tactics soon, been ranting alot lately it seems.

Posted by Grumpy Guardsman at 10:07 AM