Digital Releases and The Effect on The Game 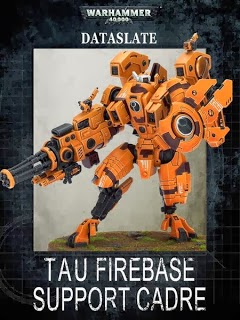 Ok so time to jump on the bandwagon and talk about GWs recent releases that started this month.  Yeah I know everyone is talking about these (not just the one above) and I'm certainly not going to be spouting anything revelatory to you.  But I need a little more time to work on the next Troops Tactics article and this is a good filler and I happen to have an opinion on it so why not.

So GW has recently been releasing these one off supplements or whatever you want to call them.  The first was the Daemon prince bel'akor and the next big one was the pictured above, the firebase support cadre, which is a formation, the first of its kind for 40k.  Now to begin I am liking the releases that this has brought and I think it is nice to have a character or unit added that either went away or has long been in the fluff but never given rules for.  It adds more to the hobby and gives you something new to play with.  There are however the detractors of these digital releases and they do bring up good points, though I don't totally agree with them on how big of a deal that they are.

The first being one of quality, this is prob most readily seen in the recent Inquisition release.  While I personally like it and have found great use of the options it has opened up and the background fluff in it is quite good, there are other areas that are certainly left to be desired.  Many have accused it of being a copy paste job and they would not be far off in doing so.  Could they have done a better job, absolutely, but they may not have wanted to have two completely versions of inquisitors via grey knights and the Inq standalone.  This is a reasonable argument and I can accept that keeping them the same simplifies things since all you are really getting is access to an inquisitor and all his toys, not everyone wants grey knights or coteaz.  There are however good quality in the books as well, with the relics and warlord traits being quite good in what you pay for and certainly being above average when compared across the board. So yes they could have done better and hopefully will in the future.

The other main argument is that these releases upset the balance and the "meta" and introduce more and increasing convoluted rules and options to the game, increasing the chances of overpowered combos and people taking advantage (read cheating) of the confusing rules.  Well first off I don't agree, the fact that more is being added to the game is awesome.  I love that this has become the most flexible and spoilt for choice editions in 40K history.  We have flyer's, allies, special allies, formations, fortifications, far more in depth psychic system, more in depth close combat system etc.  I have been playing 40k for a long time, not as long as some long beards, but I am certainly in the middle age group of players.  I been with the game long enough to see where it had come from and to smile with happiness.  There are things that we complain about playing with that were not even dreamt of when I started playing.  But wah, this upsets the balance and gives others an advantage.  Yep it does, it always is the case that the latest army to get a codex has an advantage (unless its a really bad codex), and the same will be for these digital supplements.  Yes you can have a main army with an allied detachment, and then an Inq, then a formation, then possibly a super heavy, and maybe a fortification.  Oh no what will we do, how will I deal with it.

Well you will, just like every other addition and every other change to the game, guess what it seems like its so bad because we don't know whats in store next and how its going to effect the game.  Well guess what it wasn't so long ago that 40k was like this.  I know many have short memories, but we use to have a similar situation with main army books, supplement books, sub army books, white dwarf rules and units, in short we had a hard copy version of what is now a digital one.  The other reason that this seems so crazy is because 5th was truly the consolidated edition, everything was in the main rule book or an army book and that was it, there were expansions, but those were more of specialist games vs supplements to the regular game.  Then at the end we started to see this change, the big one was death from the skies and lots of flying units being added to the game, this then was seen carry over into 6th with the addition of flyer's.

Of course when 6th came out there was the bo hooing of double force org and flyer's and pretty much everything new about the game.  Well its more than a year later and the game is going strong and I have lots of fun playing it and love how different it is for game to game.  5th edition was a good edition in its own way and there were things I really liked about it, but it was so boring at times, the variety in armies and play was so much more limited.  Now though you have so many more options than has ever been available.  And this is a bad thing?  How?

I know formations are taking some flak, and I think the main reason behind it is not that the formation itself seems bad, but because the first one was released for Tau.  Had the orks or tyranids received on I seriously doubt anyone would be complaining anywhere near as hard.  But Tau got it first and like it or not its there.  There is confusion about how it works, and I don't own it so I can't confirm 100%, but according to what I have read and gathered a formation is treated the exact same way as an ally from a parent codex, ie it would be battle bros, allies of convenience, etc based of its parent codex.  The other thing is that they have to take the exact composition of the formation. In this case a riptide and two 3x broadside teams.  Now I may not be right on that last part but that's what I have gathered short of buying it myself.  This is important because it means yeah you can take it and benefit from the special rules, but you have to take it as is, plus the allowed upgrades.  This mean that they aren't cheap, that in itself is a nice balance.  The other thing is that there is a disadvantage to taking one, ie in this case Space Marines have hatred against the formation.  Now I would prefer that they had gone similar to apoc and added a base cost to take the formation plus the actual unit costs.  I think this would add a little more balance to this but since they aren't really adding anything game breaking I really don't see anything game breaking.  Its funny though at the two faced nature of the community, at least a part of it.

I fully believe had a CSM formation been released, the community would have hailed it as a triumph and a boon to the game, but since it was Tau, and those dirty mothers cheat already, why should they get this Harrumph!  C'mon really, its not like these weren't already being taken in many cases, so what it changed is just the options and how an army can be played.  I think that this could certainly be abused and as more of these get released it prob will be, but I think that more has been added than lost by the digital releases.  And as time goes on more will be added and they will balance each other out as other armies have options of taking them.  And hey you can now take some Tau with your IG if you want to (But then you would be a power gamer and a heretic and shot for such treason to the imperium) ;).

This really isn't new territory, GW has been here before and the fact that they have gone back this directions should not be a surprise.  It will really be interesting to see where 40k is a year from now and I could certainly not predict it.  But I have a good feeling about it.  And in the end there will be another edition eventually that may tighten this up.  The fun that you have with this game is entirely up to you, you choose to have a bad time, the latest digital release or army you play has nothing to do with it.

So have fun and just wait.  This storm will break, a new rhythm will be reached as it always has and the game will go on.  I for one will keep on having a good time.