Happy Holidays and Thank You 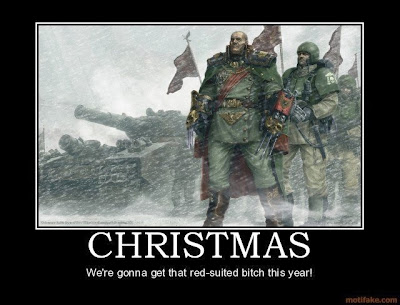 Hello everyone, I want to wish you all merry Christmas and happy holidays.  I am taking off today to visit my family for the holidays so posting will decline dramatically for the next week.  I will do a few posts if I find the time but it is going to be busy for the next week.  I over promised in delivering tactics articles, I did not expect so much time to be taken up preparing for my trip but thats ok, I'm sure you all will survive a few weeks, its not like tyranids are coming out or anything.  I want to thank everyone that reads and comments on this blog, it is an awesome experience to have different people from around the world sharing in the same hobby and enjoying the Imperial Guard.


I did get some painting done this week though and my bastion is nearing completion, so when I get back I will be finishing up my fortifications and whatever additional Christmas warhammer gifts I receive.  I like how its looking so far so hopefully it ends up looking well with my other fortifications.  One thing that does suck around this time of year is finding both time and people to get a game in.  I don't know if anyone else has this issue but it has been nearly impossible to find someone to play for the last two weeks or so.

So I played some Only War instead.  Its pretty darn fun and if you like the imperial guard and role playing, it really is a good time if you can find the right group of people.  I struggle sometimes since I am in the military and find it hard to deal with people who's experience of tactics is CoD is different from my own(Comparing to CoD was a little harsh).  Nothing wrong if you aren't an expert but when you are setting up a polish ambush (google has gone all PC on me and won't find a pic of one) maybe you should listen to someone who is saying the we shouldn't set up across from one another so we don't hit each other.  Just saying.  That and just how things work in general from the strategy of the campaign and missions that the squad gets sent on.

I know a lot of people like big missions, but most cases a squad is not getting sent on a mission of strategic importance as their first major mission.  No they are going to go set up an ambush or do a patrol and such at least to start.  I know a lot want to be heroes, but as I see it, you have to become heroes, not just start as one.  Its usually the little things that bug me, for example our squad was sent out to secure a large refinery.  A single squad would never be sent to do this, real world or IG.  Now demo the refinery is a whole different story.  Had we had one other squad go with us, that would have made everything fine and dandy for me, they didn't even have to do anything.  Now I don't want you to think I am against different play styles or differences in story telling.  I know it kind of comes off that way.  Its just a difference of how I like to play to how others like to play.  And usually when I am in those groups I am the minority and I just grumble in the corner(in Character) when things get too silly.  Its still lots of fun and it has so much potential.  I would love to do a storm trooper group, with a small squad combat focus.

Anyways I hope you all have a good holiday and look forward to the new year of gaming.  Thank you again for all the comments, suggestions, and ideas.  More will be coming soon.

GG
Posted by Grumpy Guardsman at 10:50 AM