The Escalation of 40k and Random Randomness 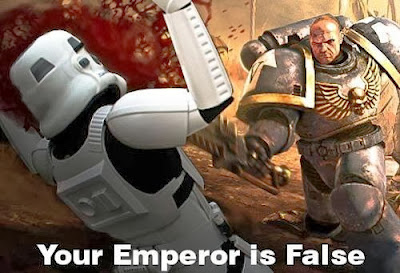 So its the end of the week and its been an interesting one.  Afraid not much hobby stuff has gotten done.  I have a bastion and weapons that need painting but oh well.  The holidays are coming shortly and all that is required for that has demanded time this week, combined with work meant I could do little more than write a few articles.

Seeing that and I am a little tuckered out from tactical writing, lets have a little fun. 40k is awesome, and by 40k I mean the universe as a whole, not just the game system(which I like too).  I love the darkness and far more serious nature of it and though it is certainly not "original" it is it's own thing and has been for a while and grown into what we have today.  And if you love star wars well your emperor is false and prepare for the emperor's mercy :). 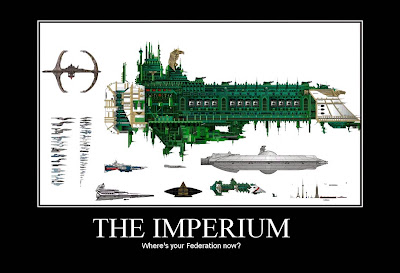 The scale of it is one of those things that attracted me and has kept me.  I love how big and unstoppable everything can seem to be, each unstoppable force hitting each other and canceling out the other.  The scale of machinery and weapons is also awesome to imagine.  I love how big these ships are and I know I am not out there that I really want a redo of Battlefleet Gothic and I would love a video game for that as well.  Ah that would be so awesome a Space Combat fleet action game.  Having to manage the defense of a large sector and keep your ships fighting.

How would you envision that?  Me I see it based around controlling and destroying space stations and other space borne structures and managing the resources to keep your ancient and venerable ships running.  So less on production of ships themselves, making them a precious commodity that you would have to commit to battle or try and stay alive.  You would be able to capture ships and be able to recover wrecked ships depending on the damage sustained.  I think that could be a good game, that would really emphasize good generalship over resource grabbing and out producing your opponent.

Another video game I would love to see is a FPS based around the Imperial Guard.   I know that could be hard, as guardsmen die to everything in 40k.  But I think there is a way to do it.  A good setting could be based around storm troopers, so at least you are the best of the Guard and have better weapons and gear.  Plus that would be more fun than just fighting through trenches and slug fests.  More of a spec ops oriented game and less just run through the halls shooting everything.  Idk what do you think.  Obviously a leman russ based game would be awesome too.

And Titans, I mean who doesn't want to have a titan game.  I don't think there is much more I can say than this: 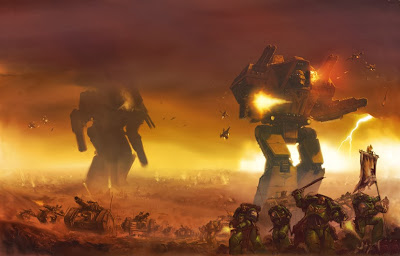 I mean that would just be awesome

Now I want to get to some of the latest of this week and the big thing is the arrival of escalation and stronghold assault.  Looks like I am eating some humble pie.  Way back when this was first rumored and the world was ending for 472nd time, I didn't think it was a big deal and I predicted it would be treated like expansions similar to planetsrike etc.  Well guess I was wrong.  According to everything I have seen, these are part of the game.  Now you can still refuse to play someone if they are using it, but they don't have to ask for permission either.

I don't think this is such a big deal, since there are advantages given to your opponent for bringing super heavies.  The nice thing is fortifications that are coming out in the same release are a good counter to those super heavies and give you options to go with.  And is there really anything wrong with options.  I really don't think so.  Honestly formations bug me more then this.  I like the FoC and believe that having those limitations make for a good game.  Having ways to just ignore it is not something I like.  But they are again expensive options and I don't see many taking them unless they are essential already doing so.

I must admit, I might get a baneblade now. I like Apoc, but I don't play it often enough to justify it.  Now though I might get one as I don't have to bring 10000pts of guardsmen along with him.  To everyone saying that this is apoc mini, it hardly is.  Apoc is a completely different game (And a good one)  and just adding a Super heavy slot Apoc it does not make.  So will this break the game?  The game has never been and will ever be balanced as a competitive game will be.  Its just a fact.  This is the history of 40k right here.  Nothing new, and we have made it to edition number 6 through all of the broken games.

Don't get me wrong I love to complain as much as the next guy, but that's in good fun, and only occasionally do I have a serious gripe.  Is this hobby expensive, yeah it is, guess what its never been a cheap mans hobby.  Is this a way for them to get more money, sure.  If its a good product being produced, why is that an issue?  They are a business and we are consumers and must maintain that relationship for that business to be.  I don't know what GWs profit margins are and I'm sure someone will enlighten me, but at the end of the day thats what they have to do.  Do I wish that it got cheaper, absolutely.

All in all, I have gotten more excited about this as time has gone on, and I have recently tried to have a more open mind, and look at this hobby as one of ever changing nature.  Its not a bad thing.  This edition maybe convoluted, but so what.  Should GW release FAQ's better and update rules, oh fuck yes, they leave a lot open to interpretation and I can get as upset as any.  But by accepting the change, I find it easier to just keep playing and have fun.  Most people I play with won't change much with any of the recent releases.

I personally have voted with my wallet and not bought the recent digital and new releases.  I want then to be cheaper, thus I don't buy them and find other ways to get my hands on them.  I'm sure I'm not the only one.  I would love to own all th codex's, I like to research and read fluff.  But at the prices they are at, nope not happening.  I'll buy my codex and the few things I like and thats about it.

And if you find your self fighting a superheavy, well they die like everything else, and it may take a few games losing before you win and counter it.  Is it really that big of a threat.  Is everyone going to be bringin them?  God no, they are expensive in money and points, I certainly won't be bringing them in my standard army.  It might make it into my armored list for fun, but thats probably it.

So I have rambled on enough now, and I hope I did not bore any one too much.  Please share your thoughts and desires on how you would like to see the 40k universe, not just table top, expand.

And I really do love the artwork of 40k, though I won't go into it as this will never end ;) 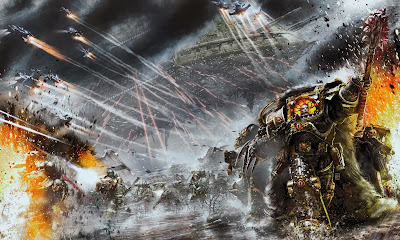