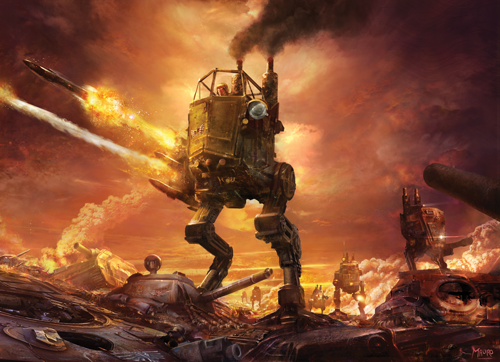 Back to some tactics finally!  Well work has been busy lately and closing on the house has taken plenty of time, luckily getting the keys this week and then begin the moving process.  So hopefully next month I'll be back to blogging more, so bear with me.  Today I want to talk about sentinels.  I have always like the models for them, and in the current codex and edition, they are quite good and a solid choice if you want to bring them.

The biggest thing that has improved them is in pts, they both lost some of their previous cost.  The armored benefitted the most, but the scout did as well.  Its base cost may not have dropped, but weapons costs did go down, so kitting them out is overall cheaper and adds up when you start bringing more in.

Scout sentinels come in at 35 like before, have scout and move through cover, are armor 10 and opened topped with 2 HPs.  Basically exactly the same as before. But they are better in 7th as they can score, and have hammer of wrath.  Not huge sure, but I'll take anything that makes walkers better.  Weapons upgrades are dirt cheap now, they start with a multi laser, or can take a heavy flamer for free.  Missile launcher and AC are 5, and lascannon is 10.  Personally my experience puts me at taking Auto cannons or MLs if I want to shoot at range, with heavy flamers being great if you are outflanking with them.  Camo netting is a good choice for them at well, but at 15pts per it can get spendy quick so make sure you are keeping them in terrain, importantly though camo netting does not require you to be stationary to work.

These guys are best kept cheap, they will not take a whole lot of fire to go down so keep that in mind.  Now if you are interested in using cover, camo netting can be good but at 45 for a squadron, thats another sentinel + so think if this is going to be worth it (it can).  For me the most success I have had with them is just keeping the MLs on them and outflanking them and hitting tanks from the rear and infantry units.  A heavy flamer is great in this role as well, giving you much better anti infantry fire but less anti vehicle.  This can be a great way to pop out and flame an open topped transport and surprise your opponent.

The scouts are really good at being a flanking unit, either using outflank or sticking to a weak side and peppering the enemy with shots.  BS 3 hurts them when using one shot weapons, so staying away from them is recommended.  Once out there, they will die to any dedicated shooting at them, so plan on using them as a distraction and to draw fire from more important units.  They are pretty cheap, so use them that way.  If they survive or are ignored, then you have a thorn in your opponents flank.  Two squadrons are cheap and give you flexibility in that you can use them as scouts and as flankers and put out enough shots to be worth it.  I like them and have used them well enough that I would consider them in armies still.

Now the Armored Sentinel really got the biggest win here.  He dropped to only 40 pts, and got the same weapons upgrade decrease as well.  He can take the plasma cannon in addition to the other weapons, at the same cost as a lascannon.  Honestly this is a really good unit.  They are not opened topped and have AV12 front armor importantly.  This combined makes them much more survivable.   Their weapon upgrades are cheap and they are just tough enough to weather some fire, especially if given some cover.

Really these guys compete in utility with heavy weapon teams and are better.  They have a higher survivability, are harder to be one shotted, and can move and shoot.  They are more expensive, but really they are worth it.  So if you think of them as up armored, mobile heavy weapons teams, you are on the right track.  If you are looking for a unit that is going to hang back and shoot, these guys are a great choice and something to consider over heavy weapon squads.  The plasma cannon, ML, and autocannons are really the go to weapons for them.  They care the least about BS 3 and have high S to be useful against infantry and vehicles.  For 150 you get 3 plasma cannons, which is a very good price for that.

If you don't mind the risk, plasma is a great weapon for them.  If you don't want to worry about gets hot, then the AC is good as well and will still put out enough shots to do damage.  Their main role is to provide mobile fire support while being able to use terrain to survive.  Keeping them near flanks works very well for them, and though they may not seem like it, they can still move enough to be effective.  Since they are gun focused, they don't really have to worry about trying to get into CC.

And speaking of CC, they actually are a great Tarpit and speedbump unit.  With AV 12 and being walkers, they can be surprisingly hard to remove.  Stay clear of anything with melta bombs, pfists, or any real dedicated anti tank cc weapon.  Krak grenades are not too much to worry about, as they still need 6s, so its unlikely for them to be taken out in one round.  I have used them to hold up a tactical squad for half of a game, as three of them can stick around for a while.  As long as you aren't using them against a CC unit, they will survive long enough to hold that unit up.  It is important though to not go after units that can't hurt them, as they can just fail their check and run out of combat (if not swept) and defeats the purpose of using them to tarpit that unit.  But that can be useful to force a unit like cultists back off of an objective.

Really they are decently cheap all rounders that shoot pretty good, are moderately survivable, and can jump into combat in the worst case.  They don't have a lot of attacks, but they really aren't meant to kill the unit, just hold it up for a few turns to give you some freedom to deal with more dangerous units.

Sentinels of both work well in numbers, and two squadrons of either gives you a good base of fire and either can fill different roles.  Scouts are great for outflanking and engaging infantry and vehicles from behind, and armored can sit back and fire away, as well as intercepting units and holding them back for a few turns.

The forgeworld sentinels can take Multiple rocket pods, but overall this would only work well on scouts, as the armored are the old IG costs and too expensive for what they can do.  Three MRPs on an outflanking unit is not a bad thing, and can bring a lot of large blast love to infantry units.  But really unit its updated in line with the new IG book, they are out dated at the moment and subpar.

Overall I like Sentinels and they are a solid fast attack choice that brings good fire and flexibility and don't cost too much to bring.