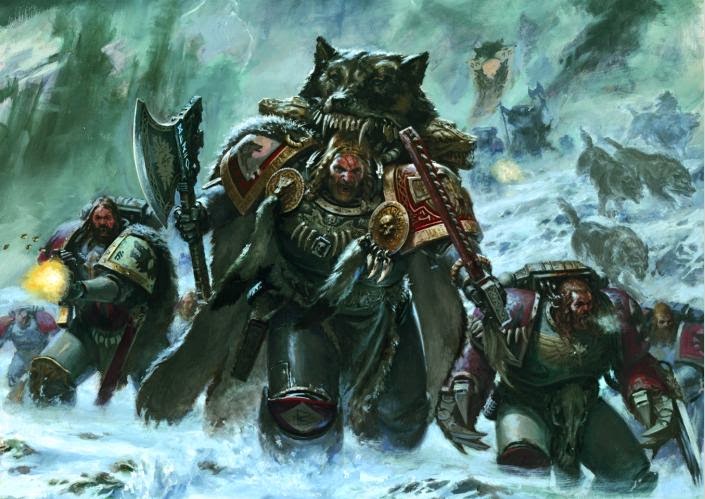 The wolves are on the loose!  First, I really like the codex, its good, not overpowered with enough balance to keep different builds viable, though their are certainly some better units.  As IG, I have always liked the wolves as an ally and more so than ever they make a great choice.  There are some ideas I have been mulling around that I think can really supplement IG armies.

Its always important to remember when choosing allies to bring units that complement your army as well as fill in any areas that it struggles with.  Wolves match IG well in that they combine strong medium range shooting with durability and assault.  Wolves also have the ability to be fast and mobile, and even more so now.  With that here are a few armies that I think will work well together.

The first one really isn't IG, as I would be taking MT.  This is an aerial assault army.  Valkyries  and scions are your primary force.  Then its Storm wolfs, ideally as dedicated transports, with one of your FA choices being another option if points allow.  For the troops that bring them, I would lean towards grey hunters and pay for the CCW, as these guys are going to be multi-role and I am going to be using them to hit units in CC as well.  To hold the ground turn 1, I would bring a mini bastion with a comms relay and throw a small squad inside and hide it in a good position on the board.  The idea is to go second and then get as much on board as possible, using the flyers mobility to get into position and then eliminate key targets.  The troops drop out and begin eliminating key threats and securing objectives later.  Its a specialized army that will work well in a lot of cases, but against a strong AA army will have a tough time.

You can certainly bring other units as well, blood claws as the troops are not a bad option, just depends on what you want to do.  A lone wolf can hide out in the bunker turn one to bring the rest of the boys in.  You can bring more wolves too, or go more scion heavy, in either case they both bring great fire power and weapons and this is a very mobile army that can hit hard.

Drop wolves are another great ally option, as they give the flexibility and reach that IG can sometimes lack.  Grey hunters are still one of the best troops in the game, and a few squads, backed up by others, in a drop can hit a key part of the board and control it.  This would also be a possible spot for Mr murder death kill dreadnought.  The main IG army should be long range shooting, with some mobile infantry to move up and exploit the hole the wolves make.   A mech guard army is ideal, but a blob army with a few vets in chimeras are also a great option.  Wyverns, mantincores, russes are all good and should be taken (not necessarily all).  You need to have fire power to support the wolves drop and keep too much threats from massing on them an swamping them.  Use our artillery to hit at range while the wolves hit close.    This is a classic hammer and anvil army, and will supplement each others strengths and cover weaknesses.  Long range IG armies lack the ability to move and hit targets rapidly, where drop armies often struggle to support the drop if they don't do enough damage in the initial go.

While I think thunderwolves are dumb, I can't argue that they are bad.  Cause they are pretty damn solid as a unit, still dumb though :p.  Taking some death riders from krieg, and thunder wovles together and you can have a nasty mobile army that can charge and kill just about anything.  The riders take out T5 infantry and less, and the thunderwolves go after tougher targets.  They are also durable and will draw fire allowing the riders to hit home.  Minimal on everything else is the way to go.  AA will be an issue, but if everything on the ground is dead or contained, a few flyers won't change too much.  You can add a SW flyer just because to cover that if you want.  I don't know how this army would do, but could be a fun little one to try if not for the rule of cool factor, especially if someone modeled the riders to look norse/viking.  You can use regular rough riders too, they are cheaper and you can fit more models in your army, but they are less durable.  Depends on how you want to go.

Really there are a lot of ways to add wolves to IG and make it work.  So post your ideas too, what armies are you thinking when it comes to combing IG and Wolves?