An Interesting Turn of WAAAAGHH! 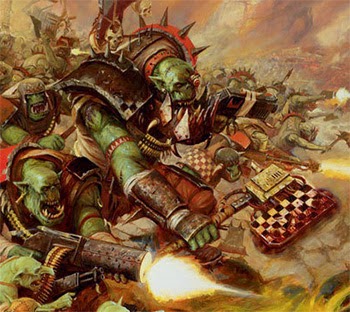 So after a couple of events, I am in the custodianship of quite a large ork army now.  By brother left his ork army when he moved out and my best friend from college just returned from the east coast and left his ork army with me too.  Basically overnight I have 2-3000pts of orks.

And while its prob not the most competitive force, I do have 9 bikes, 3 choppers, 3 warbosses, a couple of meks and a big mek, 5 burna boyz, 12 lootas, 5 tank bustas, 3 trukks, two looted wagons (one could be a trukk), battlewagon, dakka jet, killa kans, and 200+ boys and a dozen or so nobs.

There are prob a few things I am missing, but I have a nice rounded force of orks to play around with.  Now all I have to do is steal my buddies kids codex and I can make some armies.  I have always had a little soft spot for the crazy orks.  It'll be fun to play with something different while I have guardianship of them.  More Dakka!

In other news, blood angels rules leaks are looking good.  Dante is nice, I want him for my bullgryn deathstar.  He is tough, has eternal warrior, as S6 AP2 cc weapon that swings at initiative, plus he has hit and run (so far).  If all the rumors on him are true then throw him and a  Sang priest in your bullgryns and go to town.

Haven't heard much on the supplement so will be very interested to see how it is set up, as pretty much every codex supplement so far has been pretty good, so expect the same of the BA.