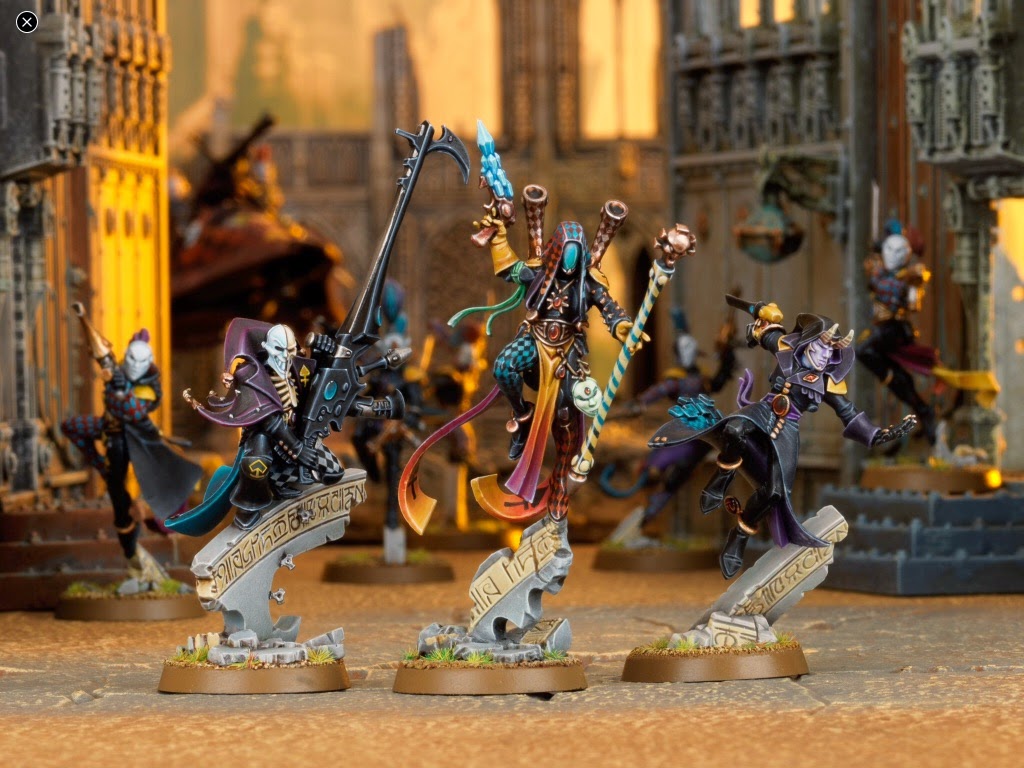 The new harlequin release is looking great so far.  The codex will be out soon and should get a good final verdict but from what I have seen they are going to be a good force, though not going to be top of the meta either.  Thinking along the lines of MT but a little bit better.  AT is a bit of an issue but I think they can handle them.  They have a lot of good tools though, and the shadow seer is definitely going to be a big presence, and I think the death jester is going to have an impact as well.

On his own the death jester is ok, he has a good statline and has a shuriken cannon with a special shot thats prob not going to be used a whole lot.  The big thing he has though that if a unit takes a wound from his shooting, they take a morale test at -2 leadership AND the death jester chooses the direction they fall back if they fail.  This is actually a very nice ability, and getting a couple jesters into a harly list is not going to be too hard.  Fearless isn't as common as it used to be and stubborn exists but isn't widespread enough to counter this.  Deamons are pretty much universally fearless but not bad if only one army ignores this.  Being able to control your opponents movement is really powerful.  Draw a unit out of cover, or off the board if its near the back or side edge, or closer to a unit you want to assault with.  There is enough utility in this alone to bring jesters.

Shadow seers are also great, with access to telepathy, sanctic, and their own special psychic table which is not bad.  I think you'll see lots of these guys running around, with a good portion taking the standard harly psychic table and maybe telepathy or santic depending on the situation.  They can really support the harly army around them and keep them alive longer, plus screw with their opponents army.  Which is a big harly theme, just plain trolling their opponents.

The warlord traits are great, and you can really see most of them being useful.  The twilight and dark tables are going to be used a lot.  They have been leaked so go check them out, I'm not list all three of the tables here sorry.

The transport looks good and will do the job, I don't see harly's operating as big units anyways, this is going to be an MSU army and their transport supports this build.  The other gunship version, I don't know, me I would keep it base and not bother upgrading the gun to haywire or the other special harly gun.  Massed S6 fire works in this edition, so I would just go with that to help clear out infantry and whittle down AV12 or less vehicles.  They are mobile though so should be able to get side and rear armor shots.

The jet bikes seem to be best suited in small squads, with the upgraded haywire cannon, I would use them as small tank hunting pairs.  Use them to weaken a tough vehicle before going in for the kill with fusion pistols.

How I would build my harly army would be a couple of basic troupes, with minimal upgrades and supported by shadowseers or deathjesters.  A troupe or two with fusion for zooming in to deal with armor, with the jetbikes supporting.  The gunships weaken infantry squads and light vehicles, to keep the fusion and haywire for critical targets early.

Till I see the codex together and all the options, its hard to say.  Once you start building and adding points, then you'll see what you can build.  Harly's are going to be balanced on a knife edge though.  They have tools, but their cost is going to mean the army is going to be hard to optimize and is going to take a bit of playing to get the army structure right.  Will be interesting to see, but they have some very good support units and quite a few shenannigans to help them out.