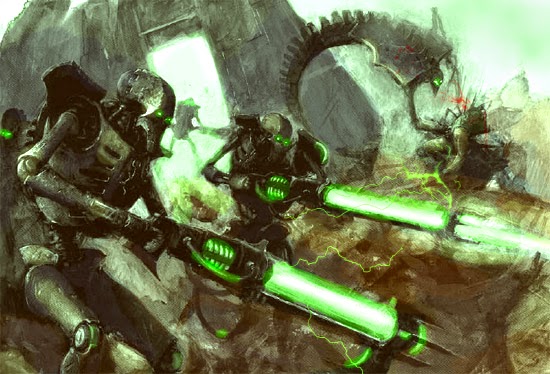 This is going to be an initial overview of how to deal with necrons.  Not going to be in depth as I haven't played against the new army yet nor poured over the codex for a long while.  But there are definite things you are going to face and need to deal with as IG
Wraiths are still a thing and better than ever.  Expect them as part of the canoptic harvest, giving them reanimation protocols(RP).  They are fast and can move through terrain, T5 now with s 3++.  That being said, massed fire will bring them down.  As well as S10 weapons.  Manticores in general are great anti necron weapons, a good portion of their army has 4+ armor save, and S10 is great for anything.  This will double out their T, so that you will kill one when if fails its saves.  Key with wraiths is to try and hit them hard early, and mop them up as they get close.  Massed small arms fire can deal with them once whittle down.

Manticores really are great for fighting necrons.  With quatnum sheilding you really want to get that pen early.  So with manitcores large blast/s depending on how you roll, you can cover a group of necron vehicles and strip their quatnum shielding relatively easily with S10 and ordnance.  Plus they will do great work agianst necron infantry.

Wyverns are great, don't need to go too much into this.  Point them at units, like wraiths, or anything with a T save thats in cover and erase, rinse repeat.  How I would use them is my secon layer of fire support.  Manticore has the outer ring with its range, with wyverns dealing with targets that get closser, giving you layered supporting fire to continually hurt tragets without having a single unit having to focus on the target the entire game.

Triarch stalkers are awesome, expect them and destroyer lords to be in a combo unit together.  Hit the triarch stalker first, its not terribly hard to kill, but focus some of your early fire on it first.  Use other fire, like wyverns, to destroy/cripple the unit that the stalker and lord as supporting.

Necron air is not going to be as big, as few night scythes will still be common, but large formations will be rare.  They are flyers, have a plan to deal with them just like other flyers.  Vendettas are great help, as long as you can get the drop.

Leman russ eradicators are a good choice to fight necrons, as they can kill warriors with little problem, with ap4 and ignores cover.  With necrons, they are going to rely on layered saves, so remove as many of those saves as you can, whether it s ignores cover, ap, or instant death, do what you can to ensure they have less chance of surviving.

Crypteks definitely going to be seen.  Kill them if at all possible, focus fire, us barrage, whatever you can to kill them.  The precision shot order on a boat load of lasguns can do the trick.

As I said earlier this isn't meant to be the compendium for anti-necron tactics, but its a good starting point to let you know some of the tools you need and what are the biggest threats you'll be facing.