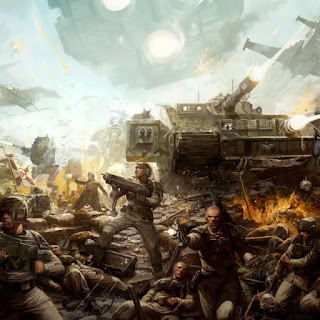 Next up from the Mont'ka campaign book is the actual Cadian Detachment and its associated warlord traits and heirlooms.  In order to have a Cadian Detachment, you cannot have any Non-Cadian special characters, so only Creed, Kell and Pask are allowed.  There you have a Cadian detachment, and your bonuses are that you can use the Cadian Warlord traits and heirlooms.  And of course the Cadian Battle Group.  I would note that non of the Mont'ka formations are Cadian specific, so you can take a formation as part of your normal CAD army without having to be cadian, its just the Battle Group that is Cadian.

So the Warlord Traits.  Note that you do not have too, you can still choose any of the BRB tables or the AM book.  Before you get to thinking that you can get different traits for your tank commanders, think again, the AM codex clearly states that they can only use the AM table.  Unless a FAQ comes out in the next decade adding the Cadian table, that is what you are stuck with for tank commanders.  so this is for your Warlords that are not vehicles.

1 is Master Orator - Warlord has Zealot.  This is nice but not amazing.  Basically warlord is fearless, passing all morale, pinning, fear, and regroup tests, can't go to ground or fail morale check for weapons are useless.  You also get to reroll to hit in first round of CC.  On a lord commissar this isn't bad, but since you'll likely have a CCS, he will rarely be a warlord.  On a CCS, the only really nice thing is that they won't be running.  Other than that, CC is not their strong suite.

2 is Dead Eye Shot - Warlord is +2 BS and unit is +1.  This is great for a shooty CCS.  Its a solid trait that helps out where its needed.  On a Lord commissar this would be nice, as if he joined a larg IG blob, he would up them to BS4, not bad at all.

3 is Artillery Veteran - Warlord can act as a Master of Ordnance once per game.  Its not bad, its only one use so not going to get a whole lot of mileage, plus we all know how accurate the MoO is.  Its good, no real downside other than you have to stay still to use it, but there is prob going to be one turn where your warlord will be sitting still.

4 is Unflappable Stoicism -  Friendly units part of a Cadian Detachment do not take Morale checks for 25% casualties within 12".  Esactly the same as in the AM book.  Just as good.

5 is Above the Thundering Guns - gain voice of command, if already have it, get extra order.  Same as AM.  Again its good.

6 is Staunch Traditionalist - Friendly charcacter in Cadian detachment must issue and accept all challenges ala chaos.  But you get to rerolll to hit and to wound rolls.  Yay!  Yeah this one is poop.

Overall I rate this table 6.5/10.  It has a couple of really good ones, some the same as AM, and it has some poop.  Overall I think the AM table is better, as it really has no outright shit trait.  And then strategic is so good too.  Really the only thing that gets the most bang for buck out of this table is Lord Commissars or if you have a random IG sergeant in a blob as your warlord.  Otherwise I think the other tables are more reliable.

The Heirlooms of Cadia though are very nice.  This is what you want a Cadian detachment for.  Two stand out as the best right away.  Note that models that can take Hierlooms can still take AM Heirlooms.  So you can have one take a Cadian Heirloom, and another take an AM Heirloom.  Note that there is no restriction on a single model taking multiple Heirlooms

Kabes Herald is 20 pts and only one Tank Commander can take it (only one allowed and only tank commanders can take it).  When the tank commander issues its tank orders, you can choose any/all Leman Russ Squadrons within 12" and they also are affected by the order.  For Gunners Kill on Sight, the other leman russ squadrons gain split fire for the phase.  This is damn good.  And its nicely priced.  At 20 pts you can have your entire Armored company benefit from the orders, if you pay attention to placement.  So either split fire, fire and pop smoke, or go flat out.  This helps if you need to re-position your armor line quickly or have a lot of approaching threats.  Plus you can build your squadrons with different load outs and not worry too much about target priority.  This is just plain great.  It goes perfectly  with an Armored Company.  I love this one and plan on taking it in every Leman Russ list I take.  Note that one leadership test is taken, if passed all are affected.

Standard of the Lost 113th is 30 pts, double a regimental standard.  It has all the rules of a regimental standard and only a veteran that can take a regimental standard can take it.  It also allows the bearers unit to plant the standard.  This is done at the beginning of its movement phase.  That unit cannot move, run or charge for the rest of the game, but all friendly cadian units within 18" are fearless.  So remember that big infantry company, yeah this who takes this.  So you march up the field, take those objectives (placement is important!!) and plant the flag and hold on till the end.  Also remember that all the other units can still move.  18" may not sound like a lot, but with blobs its easy to position them right to keep them in range.  I like the sound of 150 fearless guardsmen.

The rest are decent, if not totally stand out.

Volkov's Cane is 10pts, and can only be taken by a company commander.  Orders from him only fail on a double 6 when issued to a unit within 6".  It is also a S user, AP4 Concussive melee weapon.  So a nice little weapon that is cheap and offers a nice bonus.  Also if you remember the Battle Groups bonus of having 3D6 for a order, discarding the highest, you would have to roll three 6s to fail an order.  You will just have to stay tight on their ass to be able to use it.  It would combo well with the CCS carrying the above standard as well, as they will be following close anyways.  I like it, its cheap, and multi functional.

The Iron Left is not as good.  Its 25pts and is a melee weapon that is +2 S and AP 3.  Thats it.  I mean its nice, but I think I will take a power fist over this.  There is only a few things that are slower than a guardsman.  It doesn't offer any additional bonuses, so for 10pts more than a power sword you get +2 S.  Not sure if that is worth it.  Maybe.

Celeritas is another CC weapon, since Cadians like CC.  Its 10pts (much better), and is S User, no AP and is Master Crafted and has Deadly Riposte.  When fighting in a challenge, the model has an 4+ invul save and for each successful save made, an attack is made that auto hits and has rending.  This happens even if the model is killed in the challenge.  I mean, if you have a challenge problem in your community then here you go.  Its cheap so there is that.  Its not downright bad, but is a little too specific to really be useful.

Last is the Wrath of Cadia at 5 Pts, so dirt cheap.  It is a pistol with S3 no AP, and the Punitive special rule.  This weapon always wounds on a 4+, in addition armor saves taken against it will always fail on a 3 or less even if the armor save is better.  So haha termies, you have a 4+ armor now.  To be honest its not bad at all for 5 pts, I would take it.  Only a plasma pistol is really better and its 3 times the cost.  So for cheap you make all your opponents have a 4+ save.

So thats it.  Again the Standard and the Herald are def the winners.  The cane is good too as its cheap and multi-functional.  I can see a lot of infantry and armor builds relying on those two Heirlooms.  Overall the Cadian stuff is good, though the Warlord traits are passable.  Really its the Heirlooms that you want.