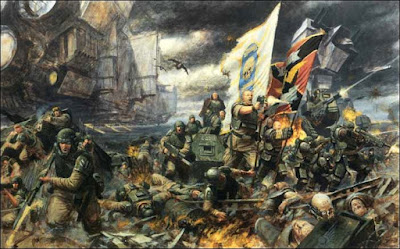 So next up from the Mont'ka campaign book is the Cadian Battle Group detachment, it is also a Cadian Detachment, which I will go over in another post.  Short of it is that you cannot take any non cadian special characters, so that leaves you with Pask, Creed, and Kell.  You can't take yarrick anyways though due to how the battle group is laid out, and the other special characters aren't much of a loss.  There is a cadain warlord table and heirlooms, which both are good, but again I will go over that later.

The Battle Group is broken up into Command Choices, Core Choices, and Auxiliary Choices.  The Group must include at least one Command choice, note there is no restrictions on how many Command choices you take, but there isn't really much bonus for taking more than 2 as you are going to run out of pts long before you need to unlock more Core and Auxiliary choices.  For every Command, you get 0-3 Core Choices, for every Core 0-3 Auxiliary.  So you take 1 Command, and 2 Core, you can take 6 Auxiliary.  Trust me it will be hard to fill this out as you will soon see.

Command Choices are 1 Company Command Squad or 1 Tank Commander, either can upgrade to Cadian Special Characters as normal.  0-1 Lord commissars can be taken as part of the Command choice.  Restriction wise, no models not specifically listed in the formations and choices can be taken in this detachment, meaning that if you want to take  priests, you are going to have to take a second detachment to get them in.  How its worded, you can only take what is specifically listed, Formation or Unit, if its not listed it overrides the codex rules.  Command Benefits are quite good though.  High Command gives every Company Commander part of a Battle Group Command the ability to issue up to 3 orders each turn and can issue orders to units from this detachment within 24" instead of 12".  Battle Group Vox Net, when an officer from the detachment issues an order to a unit from this detachment it rolls 3D6 and discards the highest, so you get a nice buff to passing orders.  Sharpshooters, models from this detachment reroll 1s to-hit when shooting lasguns or hot shot lasguns.  Some very solid buffs.

You have 2 Core choices, an Emperors Shield Infantry Company, and an Emperors Fist Armored Company.  They cost 1005 and 720 pts minimum respectively.  So if you think you are cramming a lot into this detachment, think again.  Most are going to go armored, and you should.  Now the infantry build can be done, but it has to be done more carefully as it starts stacking pts up quick leaving very little room.

So really the hard part is fitting these pieces together without getting Apoc sized.  So think how you want to get your forces to work together and choose optimal choices to supplement your list.  Armored Companies just scream fun, and if you have lots of leman russes lying around, go for it.

For an Armored list, I feel the better way to go is a minimum Tank Commander for Command Choice, and the Armored Company relatively minimal meaning don't max it out all the way.  You don't need to be completely base but watch your pts here.  Now to supplement this, I feel the Assault company fits in great with Obsec vets to take critical objectives quickly and act as a mobile fire base to clear units coming to punch your tanks, and if you have enough pts, an Artillery Company after that.  Another good choice for either the Infantry or Armored build is the Psykana Division, its very cheap at 255 base and gives lots of divination options or other powers, but really divination is the ole reliable to buff your tanks or infantry.  Its really hard to fit multiple of the really good Auxilary choices in though.  So I would choose between the Assault Company or the Artillery Company and fill it and the Armored Company out a little more and save enough to throw the Psykana Division in to buff.  The Armored and Artillery Combo favors a sit back and shoot and hope you cause enough damage to take objectives.  If you worry about skimmers and flyers, I would take one Hydra Squadron to give you AA, a full Basilisk battery and a Manticore is a lot of firepower with the combination of the orders. A single Infantry or Emperors Shield platoon also can fill you out to give you troops to protect your vehicles from deep strikers and fast movers without taking a lot of pts up.

Personally I am torn between taking the Assault Company over the Artillery.  The Assault makes you competitive in Maelstrom games, and supports your tanks, which die so easily in CC, so they absolutely need some protection.  Also another cheaper way to still go armored is to take a CCS in a Chimera as your Command Choice, it costs less than a Tank Commander, and your still getting one in the Company.

The Infantry build I think really is only going to work by Comboing either the Company with Artillery or the Aerial Company.  If enough pts left either go for the Psykana or a few Scion squads for deep striking anti tank.  Now next post I will go over a specific piece of wargear that can be taken in the Cadian Detachment that can really make this a competitive choice.  For heavy weapons, I think the best is going with 10 auto cannons and 5 lascannons.  AA is provided either from the Artillery or Aerial Company.  This army moves forward to take board control and lasguns everything in its path to death.

The Recon Company is not a bad choice either here as it gives you out flanking armored sentinels to cause havoc in your opponents rear while the rest of your infantry advances.  This is also a cheap formation so it leaves room for more additions like a small artillery company or psykana division.

Well I think that is all for now.  Overall a lot of options but making the right choices will be critical in having a successful army build.  Due to the pts cost, there is no room for splurging, every weapon and wargear has to a purpose and preferably multiple uses.  I will go over some of the builds in greater detail and give them each the time they deserve, but next will be the Cadian specific warlord traits and heirlooms.