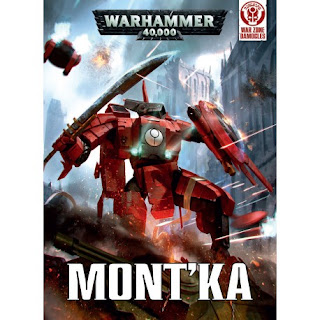 So I wanted to do a quick review on my thoughts on the fluff aspect of the new campaign.  The books themselves are good quality, artwork is nice.  I am a fan of the newer style of art that GW has been doing, so this continues with this trend, though there is plenty of old art as well.  I do like that from a fluff perspective the book does not assume that you have read Kauyon.  It gives a good road to war, with enough background to explain the new campaign.  And there are some interesting things to come out of it, including the death of a special character, though they give an out still.

The war is focused around the previous Imperial worth of Agrellan, now name Mu'guloth by the Tau.  The Tau are completely unprepared by the Imperial response, but of course super-awesome-genuis shadowsun has answers.

And that kind of becomes my gripe for the good majority of the core of the narrative.  Its basic 40k Tau vs IG trope, you could remove all the specfics and change it for another Tau vs Imperial story and have the almost exact same thing.

Basically Tau are super genius but they can't stand before the unending IG hordes.  Thats really the majority of the story.  Oh the Raven Guard out surprise the surprisers a time or two, but of course the tables get turned on them.

The tau start losing despite all their genius tactics and as all looks lost *BOOM* Farsight, and he's even more super-genius than shadowsun.  The IG & Space Marine commanders cannot stand before them, he out matches them at every turn and the imperial victory is turned into defeat.

They try to add some sort of suspense but with all the special characters listed here, and we all know this ain't game of thrones, there really isn't any suspense.  Pask and Longstrike go toe to toe, and *gasp*, Hand of Steel goes explody, but little does Longstrike know that only love will kill Pask, explosions just make him warm and give him new tanks.  The imperial commander is not a special character, so we all know from the beginning that he is going to die, and he does *shock*.

There is a moment of good narrative when the assassins are loosed.  The execution force goes in, and of course, Farsight survives an attack by an eversor, that Tau piss-ant pathfinder SC kills a Vindicaire, and the Callidus fails to kill shadowsun, but does wound her.  But in a small twist, GW kills a special character.  The Culexus slaughters its way through the tau bodyguard and kill Aun'Va.  Its one of the few original sections of the book and is well written, even though the other three assassins go down, they slay a significant amount of tau in the process.

Overall, I rate the story 7/10.  Its got moments of greatness that are marred by trope that has been repeated often enough that I am pretty sure the horse has died long enough ago that only the bones are left.  That is really what holds the story back I think, you get the feeling that you have read this same story before, multiple times.  So as a companion to a good book of rules I think it does the job, as a book in its own right, there is room for improvement.
Posted by Grumpy Guardsman at 5:09 PM