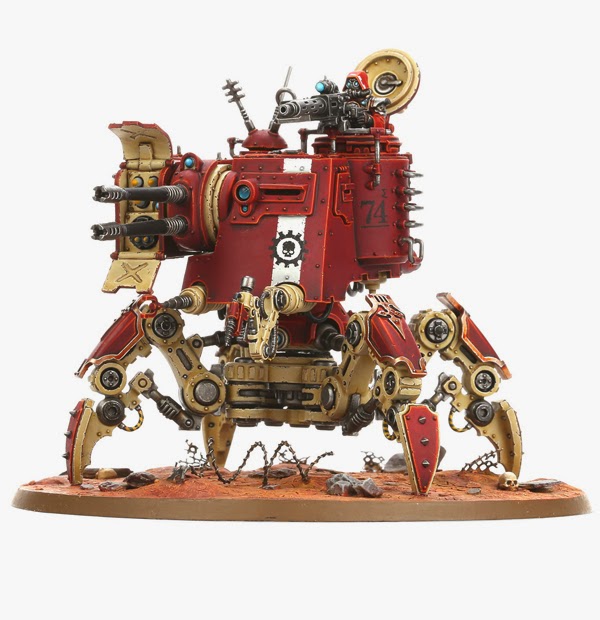 The Dunecrawler, the heavy weapon of the Skitarii.  Its a rock solid unit and really is the cornerstone of this army.  Its by no means overpowered, but its pretty cheap and pack a heavy punch and is decently survivable, and there really isn't a bad build.  Its got all the big guns and is going to be the bane of a lot of units in 40k, expect to see these become very common.

So the basic low down is that it is a walker, WS 3 BS 4 S5 FA 12 SA 12 R11 I2 1A 3 HPs, not a really stellar stat line, but not bad either.  It comes with a broad spectrum data tether (add 1 to Ld characteristic if within 6"until start of next turn), searchlight, eradication beamer, and emanatus force field.  The force field gives it a 6++, which with the field harmonics rule gives it +1 to for any other dunecrawlers within 4" of it in the same squadron.  So three in a squadron that are all 4" apart will all have a 4++.  The eradication beamer is sort of a reverse conversion beamer in that its more destructive the closer the target is.  From 0-9" it is S10 AP1 heavy 1, 9-18" its S8 AP3 Blast, and 18-36" its S6 AP5 Large Blast.  In addition it has the doctrina imperatives and crawler special rule.  Crawler means that this model is never slowed down by difficult terrain and passes dangerous terrain tests, but cannot run.  You get all this for 90pts and can have a total of 3 in a squadron.

Honestly this is not bad, and with one vehicle upgrade you can use a squadron of basic dunecrawlers as line breakers.  The one vehicle upgrade that I am going to talk about is the Cognis Manipulator, which has multiple uses.  Its a melee weapon with x2 S AP1 unwieldy (walkers don't care), field repairs, which is basically another word for It Will Not Die, which is what it gives.  At 25pts, its not cheap, but it significantly boosts the CC ability and gives it a good chance of repairing damage.  I would only take this on the base version though and use this squadron as a line breaker unit.  With scout from the detachment, it moves up with vanguard and goes for getting as close as possible, using the invul and IWND to keep it in line till it gets close enough for its most dangerous blasts and wrecking vehicles in CC if needed.

The other options for weapons are good as well.  It can take a twin linked heavy phosphor blaster at 15pts, which is 36" S6 AP3 Heavy 3 Lumagen.  Solid weapon and has a good chance of killing something and reducing cover save of the that unit plus making charging it easier.  Its a cheap upgrade and three of them will do pretty reliable damage.  The next is the Neutron laser and cognis heavy stubber at 25pts.  The Neutron laser is awesome, a 48" S10 AP1 Blast.  Its the go too anti tank weapon.  The last is the Icarus array at 25pts.  Its spendy but its three guns so really its prob cheap for what you get.  It has a TL autocannon with skyfire and interceptor, a Daedalus missile launcher 48" S7 AP2 Heavy 1 skyfire, and gatling rocket launcher 48" S6 AP4 Heavy 5 ignores cover skyfire.  It can shoot the autocannon as interceptor and still fire the other weapons, and they can be fired at a different target.

There isn't a bad choice really.  The heavy phosphor blaster isn't amazing, but its cheap and has great rate of fire.  The eradication beamer actually helps in dealing with horde units as you can control its range pretty well to get the large blast and the small blast will eat MEQ.  The icarus will destroy flyers and skimmers no prob.  The Neutron laser is just an awesome vehicle killer, I love it.  Really its what do you need in your dune crawlers.

Anti air is going to be big, so there is at least one dunecrawler, two though are prob best as skimmers and FMCs are really common too, so they will still be very useful at killing those tyranids and deamons.  There isn't much you really need to do other than give them a good spot to shoot.  They are "only" 48" so they will need to be placed smartly to be used effectively.  Great thing is that the detachment has scout so you can redeploy them if needed and to fool your opponent a little.

The Neutron laser variant is my other favorite and in pairs it will work great as well.  You won't be having to worry too much about over kill and it will just murder vehicles.  This gives you great anti tank at range and solves a lot of problems heavy armor presents.  A full squadron may be worth it too, but two should be the go too.  These are going to get fired at, so get good positions and have good fire lanes and go kill vehicles and heavy infantry.

The above two are prob going to be mandatory takes in skitarii lists, especially skitarii only ones as they provide the answers to big problems.  With 4 heavy support slots, and plenty of pts, the next dune crawler squadron could either be the standard or heavy phosphor.  I like the phosphor as it will help your other units out and synergizes well.  Against a vehicle with a good cover save, it can soften it up for the nuetron laser killing blow, or soften a dug in infantry unit for heavier fire.  A full squadron will have 9 shots, and the cognis heavy stubber is cheap and a good upgrade for them at 5pts, giving extra infantry shooting punch.

But the squadron with eradication beamers and cognis manipulators are a great choice as well.  Its versatile and durable.  If it gets close it will murder vehicles and heavy infantry, and can punch stuff reliably if needed.  Its still not that expensive and will be able to provide a lot of target threat if you use movement right.

For dunecrawlers, expect to see three squadrons in skitarii armies, one bring the AA, one the Anti tank, and another more generalist.  They will bring the pain, and they buff skitarii infantry Ld by being near, so really they are just all around great.  Love em and can't wait to get all of them.