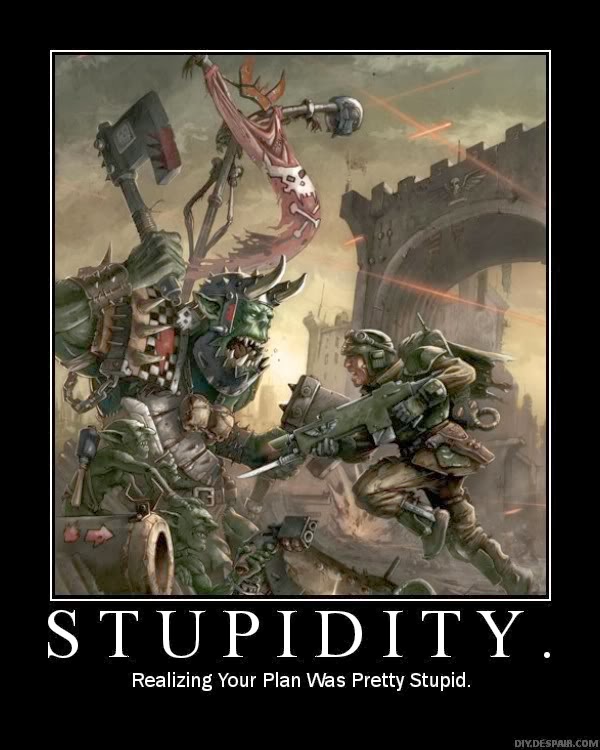 Ok so some new rumors have finally broke and they are kind dumb (see above).  Here are the links for Faeit and BoLS.  Ok so the Imperial Guard are rumored to be getting a new name, the Astra Militarium.  I will be blunt, its a stupid name and I will not be happy if it comes to pass.  I would like to note it is not because I don't want the IG to be renamed (well I don't), but because the name is dumb and it has no reference to the fluff whatsoever.  Now if they renamed the IG to Departmento Munitorum, that I could get behind, 'cause you know what, that is the IG's technical name within the Administratum, the giant organization the oversees the running of the Imperium's government and defense.  So rather than go with a name that already exists within the fluff and is unique enough for Trademark (as thats the real issue), they pull something like this and give us the Strategic Star, oh boy, sounds like a GD cereal for the army, I sure can't wait to get me some Strategic Stars -_- .

So I might be a little upset by this, honestly I will be more upset by this ass hattery vs some crappy rules. I admit I am a fluff player, there are some that would gladly play with a plastic cube if it had good rules, I am not one of those.  Fine stormtroopers suck, but at least they're still Imperial Guardsmen.  I seriously hope that this is not the name they go with, at least if they change the name, let it be something better.   The issue with this is that they would have to change all of their boxes and kits to have the new name.  Sure sister's got a name change, but they also are limited production and only have a few model blister packs, most of which are available online only.  To rename a line like the imperial guard with a huge product line seems unlikely and far too costly.  Keeping the name means new kits and old kits will still be compatible and not have completely different names, over here is IG, then next to it is Astra Militarium, to a new player those are two completely different armies.

I think this is a low possibility, but this has as much to do with my hopes as business sense.  Now the other rumor is that IG is in april.  Now this has been a rumored release date before, granted a while back, but its not out of the blue.  March has been the supposed date for a while, but the nids were supposed to come out in november, then december, so its not out of the realm of possibilities that march is wrong.  Now a lot of these rumors are originating from 40k radio, who in general have been pretty close on the rumors they put out, which is why I am so worried about these rumors.

The only thing is what is going to be released march then?  Dwarves are coming next month, it is possible for a two month release similar to Dark Elves, with a small 40k release.  I will point out the November saw a push of dark elf miniatures and the Inq codex released.  With the rumor of Imperial Knights coming and being released in march, I can give this rumor some credence.  If they are doing a large model push for dwarves, they may stage it over two months, with Knights to keep 40k fans happy through march.  Will be interesting to see what more comes out of the rumors on this.

Note that Knights will not be IG.  With the world of dataslates that we now live in, this is what is coming. I am actually very happy with dataslates and what they bring to the hobby.  Say what you like, but never before could you have this.  Especially with 6th being MC heavy, I see this as the imperial answer to a wraithknight.  GK have dreadknights so it will be interesting to see whether Knights are walkers or MCs.  I really am hoping for MCs as they outclass walkers by a mile in 6th edition, they have the rule support that walkers don't.  Unless they get a profile similar to a leman russ plus a void shield, I really can see these as MC's along the lines of a wraith knight.

I love big walkers and monstrosities, I will make no secret that if GW released a titan/walker combat game, I would sell out immediately for it. Scale the titans down, say a warlord is Riptide size, reaver dreadnaught size, warhound termie size, anything smaller IG infantry size.  Note this would not be Epic, as that game exists and is is own thing, this would be titan/walker/MC combat only and at a different scale from Epic.

If the model for the Knight is cool, I will be buying (or four), as I love Imperial Walkers and would love to have a cute mini titan with a giant chain sword :).  I'm on the fence on how it will go rules wise, but GW has been on a MC kick so I would be surprised if they classified it as a walker, but it is not out of the realm of possibility.

Anyways, other than the Knight rumors, I am not too happy with what I am hearing on the IG and really hoping the 40k radio guys are wrong in the rumors, as I have been waiting on march for a while now and will be disappointing to wait another month :(.

Posted by Grumpy Guardsman at 1:09 PM