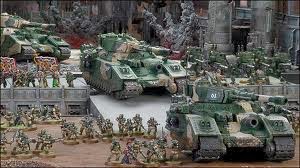 With everything being about tyranids and having done a bunch of tactics articles, I want to talk about something else.  So lets talk about List Tailoring.  First off what is list tailoring?  Well there are a couple of definitions or ways you can look at it.  The first and most common way of looking at it is someone building his army to directly counter another opponents army specifically or army in general.  This being when some builds his list to counter tyranids, or to specifically counter what his buddy brings with his tyranids.  The other is when you tailor your list to meet certain threats in your area and meta.  Now I know list tailoring has a bad rep, and TAC lists are raised up as the goal to strive for.  But lets be honest, we all list tailor to some degree or another, very few can honestly say they make an army in complete absence of thought to the opponents they will be facing.

I also want to say that list tailoring can be lots of fun.  One of my old buddies, who is a long time tyranid and blood angel player, and I would often tailor our lists to fight each other.  It was a long standing grudge match and was a lot of fun to try and bring the next best thing to beat each other.  The other reason is we could often bring units that would rarely show in  normal lists but were really good in that match up.  It allowed for the really special and fluffy armies as since we knew each others armies, we brought what would work best against each other.  It also became a good test of generalship, as since both of us had armies optimized to beat each other, there were very few weaknesses to exploit.  Neither really had a weakness to each other since we ironed those out and brought the units that were best in fighting each other.  So it ended up being lots of close games, with each of us trying to outsmart and outmaneuver the other.

That being said, this works in an environment when BOTH are tailoring lists to each other.  It is fun and challenging and is a great way to bring a different flavor to your game.  Now doesn't mean you share each others lists and build yours off of that.  But you know based off what works well against that army and generally what he is going to bring, and it evolves so its a fun arms race you have between each other.  Its a fun way to test yourself and try and out think your opponent, as you only have a general idea of what he is bringing.

There is the dick way of list tailoring and we all know it, its the guy that brings 5 lists to the shop and asks you first "what are you playing?' and then pulls out his list.  Its also the guy that waits for that certain person he wants play.  This can go both ways though and can be done in a friendly way, there is a guy at my shop who played tau, he beat me last time we played and I changed my list up a little and want another game, nothing wrong as long as I make the intention clear.  Now I would also use that same list against someone else too, I don't like showing up with out one and then making it when I get there, it is a pet peeve of mine.  Gaming is time consuming thing and if I show up on the game day with a list, it is not too mush to expect someone else too.  It wastes precious time, which is very valuable too me.  I have a wife and other things I my life I look to do other than warhammer (shocking I know) so when I do get time to game it is something that is precious and I hate having it wasted because someone couldn't take the time before they showed up to have a list.

And when it comes to TAC lists, I generally try and build my armies with that in mind, or more to say I build with a balance in mind.  I like fluffy armies, however I do not subscribe to the thought that fluffy armies are necessarily bad either or should be.  But I like my army to be able to deal with all threats.  That being said, it changes constantly, after every game I play, win or lose, little tweaks here and there.   As I play and use it, the strengths and weaknesses emerge and I adjust.  It also changes by who and what I play.  As I play more Tau I adjust to better meet that opponent.  Its nearly impossible not too.

Everybody tailors their list to a degree, simply because each area that you game in is different.  Sure the infallible webs says this unit is amazing.  But in the meta you are in, it has little use because the armies it is good against are not being played.  I fight lots of Chaos and Tau.  So what my TAC becomes is a tailored list to take all the comers in MY meta.  It is not a true TAC because it is adjusted to better meet the armies I face regularly.  And this is often the case of most areas and people.  If you look at your list, I guarantee it is not a true TAC but a tailored TAC.  Even if going to a tournament, people still tailor to face all the comers at that tournament.  If Tau are big, well most are going to be bringing their army that can beat that.

This is not a bad thing either, it widens armies and brings diversity.  With the internet and the online community we get to see those differences and get ideas from it without having been there or played the games.  We often don't bring units based off of assumptions, ie ogryns are overpriced so therefore don't bring them.  But then you see someone use them in a certain circumstance and get an idea of your own.

List tailoring is not a bad thing, and I encourage you to do it, but only in the general sense or with the agreement of your opponent.  Also the key to it it not to look at someones list and then build from it.  It is to know what his army is and then go from there, you know what eldar is good at and what the possible armies are, then go from there.  Part of being a good general is making good guesses and adjusting for the bad ones.  And then it gets fun as you two try and out do each other.  But when you just go off someone elses list, you lose the mental exercise aspect that it is meant to be.


On a completely unrelated note, there have been a few rumors surfacing about IG.  One has been that knights are in.  I'm sorry I would take a lot of salt with that rumor.  With data slates that is most likely what they will be and it is just a coincidence with it being near the IG release.  A month does have 4 weeks, nothing says it will be released the same one as IG.

The other dirty one is that the IG might be getting renamed the Astra Militarium.  I also am putting salt on this.  One I really don't see why, the Imperial Guard has been the name for quite a while and is a solid foundation in the fluff.  I really hope this is not the case, if it comes to pass though I will not be rage quitting though have no fear.  Though there may be a sternly written letter and suspension of model buying from GW itself (I really don't need anything).

The other is that the model line is going to cadian only.  This makes sense to a degree.  Now though I don't think this is permanent and have patience.  The IG is a hard army for GW because rules wise there is no difference between the different regiments.  And model wise they have to have double to triple the stock for base infantry just for some people who want different ones.  They are damned if they do, pissing people off that their infantry is gone, or if they don't, having to much stock to sit on that brings nothing in.  So I can see them halting production of different types of the same kit and going to one.  The majority in those kits will probably be a standard they decide upon (cadian, catachan) and then have options to make them different.  Down the line there is likely hood of upgrade kits being released in line with supplements to go with different worlds.  Also look it from GWs perspective.  FW already makes tallarn, Elysian, and DK models.  That is most likely the future.  With the combining of sites and ability to order FW with out the fee, this really isn't a major issue.  The costs between the two are getting smaller then they ever have been.

This I do see as likely simply because it makes business sense.  As much as people say they love X regiment.  How many do you actually see?  Mostly I see cadians.  And if not its FW.  So what really is changing?  Granted YOU may want a certain regiment, but unless you have a few mil you are willing to drop on it, GW is not going to take that into account.  The cost of making new molds and kits just isn't there when compared to the people who will pay for them.  There will always be a niche market for IG regiments and it sucks for those that lose there regiment, but lets be honest most haven't been supported in ages anyways. Its catachan and cadian and vostroyan, thats it.  The flipside of this is going down to one infantry line allows for Other kits to be made.  I honestly would rather have all of the units in the codex in plastic kits, vs having 10 different infantry sets of different regiments.

Hopefully GW will hear the demand (if its there) and make upgrade kits to allow customization.  we will see.  The rumors are interesting but I would caution all to take lots of salt with any that you hear, as there are many and contradictory. \

GG
Posted by Grumpy Guardsman at 10:42 AM