Tyranids: The Problem With the New Codex is It's Not the Old Codex 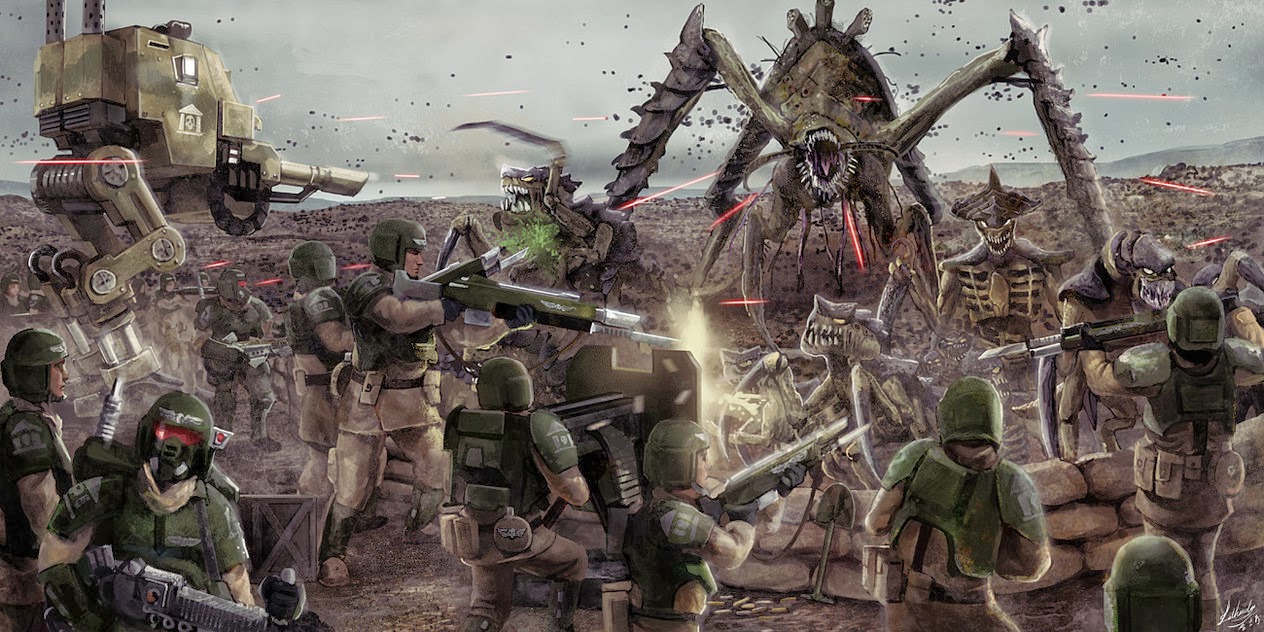 So its a week in and if you live under a rock then you prob are not aware that the world is ending and Tyranids are horrible forever and GW is mean and gave them poo.  Here's the thing though, the new codex is more than decent, its just not the Old Codex.  If you watch most battle reports and what people are playing (before the nerd rage ensues) is essentially tweaked lists of the Old codex, minus Doom since he is gone so he is just replaced by other things.  So you are wondering why you are losing?  Hmm maybe because GWs wrote the codex to bring the army more along the lines of what it is in the fluff (Lots of bugs, Big or Small) not a couple tervigons and a couple of Flyrants *sprinkle favorite seasoning*.


If you are a nid player, please stop trying to keep your old list alive, it died last week.  Instead look at what this codex is trying to get you to play, ie lots of gaunts, carnis, tyrants, and then flavor sprinkled in.  Now I have never really played nids a whole bunch, but my long time 40k budy has been playing them for near a decade, so they are not stranger.  The interesting thing is how different the last edition nids were from older incarnations, mainly in how few things nids brought to the table.  I see this codex going back to the swarm, either in lots of MCs or lots of gribblies.

So first off, Flyrants, why are you bringing them?  Yeah they are cheaper then before, but they are still more expensive than a walker.  Yes you are now taking T Guard, which brings points up, but you really don't need two Flyrants anymore.  Synapse is crucial to nids, no longer is it the bullshit of, well its kind of a bad thing but not really.  Tyrants are there to hold the army together, a flyrant is not effective if he is on his own punching stuff while the whole army behind him is eating itself because Flytard went rambo and left everyone behind.

You are not going to win your games based on how many things the Flyrant can punch, he simply cannot kill enough on his own to win the game, and you are almost giving up a wound for when he gets shot down (when not if, it will happen).  Approach your HQ from the mindset of Synapse first, punching stuff second.  He is your force multiplier, if you need to punch things, carnifexes got lots cheaper and you can bring 9 if your really want to.

Suffice it to say venomthropes are pretty awesome and it is hard to argue that they are not being taken.  Zoans are good as well, bring you synapse and a nice attack.  The Tyrannofex got wonderfully cheaper, the exocrine is very nice.  Biovores are amazing.  Really your problem is choosing your heavy support.  I would argue a brood of carnifex's are where you start, then biovores, then the last choice is up to you.

Now harpies and crones are getting shit on, but here is the thing, you don't really need to start the game with them on the board.  The crone is good at killing air, since air don't start on the board turn one, keep them in reserve and wait for the enemy to arrive, then bring them on.  Harpies can bring firepower and are decently cheap.  If you have a Flyrant, a couple of these guys going with him is a good choice to provide fire power and targets for your opponent to shoot other than the lone big bug.

Warriors, I know that no one likes them and granted they are by no means amazing.  But they have decent shooting, decent CC, and synapse.  Having a scoring synapse unit that can fight and shoot and has low priority compared to your other synapse is a very good thing.  A great choice as a back field unit that can keep synapse and deal with most things, keep out of LoS of the big weapons across the board and deal with any flankers.

Shrikes, hmm I can see these guys working simpley for having synapse.  Yeah no one likes them and they are by no means amazing.  But I can see a place for them in a fast army that needs to hid some synapse to allow the tyrant the freedom he wants.

Now Tyranids are not amazing sadly, units got increases that had no need of it and some units are still not great as they were before.  Genestealers didn't get worse or better, they just are.  I am really hoping the dataslate gives them a boost.

Fortifications may be of help here though.  One is I don't see any rule anymore disallowing tyranids shooting weapon emplacements. Fortifications give you a buffer as well and a place to infiltrate units like stealers to and keep them safe for a turn.

The thing that I think is key for nids now is depth.  Less of an all out charge in one wave, but a successive attack.  Having an initial strike, then another wave, then units from reserve, then your final attack.  Most nid tactics right now consist of CHARGE!!! and thats about it.  Using outlfank and infiltrators combined with fortifications could help a bunch.  Idk.

I will admit this is not the best codex, but its hardly the horror it is made out to be.  Hopefully the right balance is found but lots of little guys followed by the big bugs and keeping your synapse alive will go a long way to getting there.

GG
Posted by Grumpy Guardsman at 10:47 AM