Imperial Guard Tactics: The Other HQs 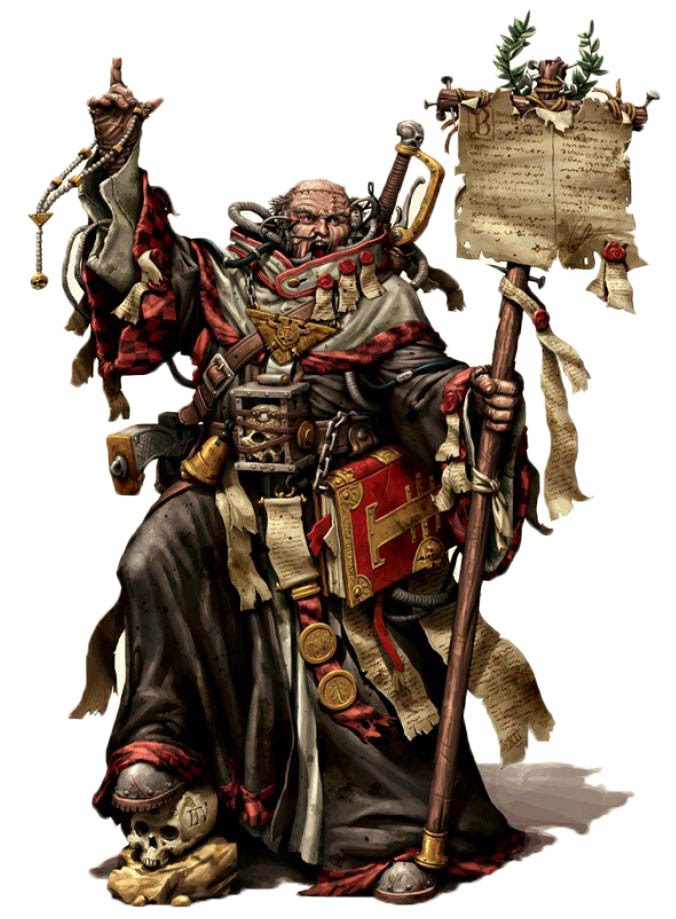 The Imperial Guard (Astra Militarium if the rumors are true) has many HQs but there are a few that exist outside of the FoC.  The ones I am speaking of are the Ministorum Priests and Techpriest Engineseers.  They are in the HQ section but do not take up a slot and you have to still take a mandatory HQ choice other than them.  They have a lot of fluff background but are rarely seen in recent years.  Neither really are that bad, just not efficient or good enough to really warrant taking unless you really want to.  My big home is that the next codex will make them far more useful.

Ministorum Priest:
First up lets talk about the priest.  You can take up to 5, they are independent characters and can be attached to squads.  At base they are 15 points more than a standard commissar, have standard IG stat line with 3s across except for 2 attacks (WOOO!).  They have flak armor, laspistol, CCW, frag grenades, and a rosarius.  They laughably have the best invul save in the IG army.  They can take a shotgun for free or an eviscerator for 15pts.  They have the righteous fury special rule which allows the priest and his unit to re-roll hits on the turn they assault, note not on the first turn of any assault.  This has no effect on Ogryns or Ratlings.  That is them in a nutshell.

Well where do I begin.  They are plain and simple overpriced.  I really wish regular commissars had the same slot as them, 0-5 outside of FoC.  Hopefully that is changed.  All you really get for the points to are spending is a 2 A guardsmen that gives you re-rolls to hit on the charge.  And thats it.  Yeah he has a 4++, but a coin flip is not reliable enough for him to tank wounds.  He is just meh, yeah an eviscerator is cool, but really save the points and throw a couple a power fists on Sgts for the same points.

I really hope that if the priest is kept in, its the current Ministorum Priest that is in the INQ and AS books.  That guy is 20 pts cheaper and has the awesome Battle Hymn powers which are straight up awesome.  So if you want to take priests, take Sisters as allies and get them that way, or Inq but they aren't ICs.  That and hope and pray IG gets them in the new book.  I really don't know if that is going to happen.

If the current guy had a Ld bonus are provided fearless then we would have a different story.  Leave him on the shelf unless he is coming with some nuns or inquisitors. 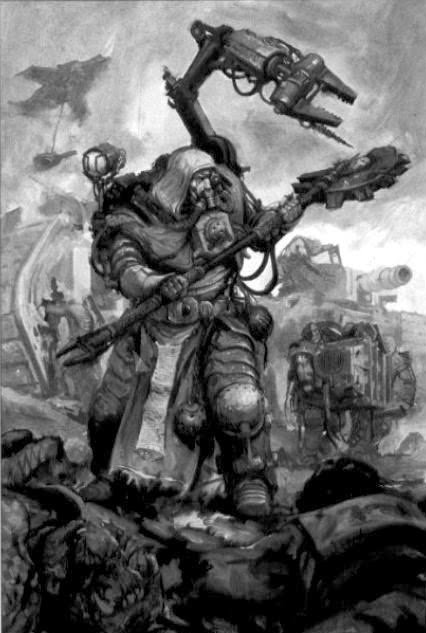 Techpriest Engineseers:
Now these guys are more useful.  They have the same points cost and for that you get a 3+ save and Ld 8.  A tech priest can attempt to repair a vehicle instead of shooting.  It must be in base contact and rolls a dice, on a 5+ a weapon is repaired, immobilized result reversed, or a hull point gained back.   You add 1 to your roll for every servo arm servitor in the unit.  The tech priest has power armor, lastpistol, a power weapon, servo arm, frag and krak grenades.  With the FAQ the servo arm means he basically has a power fist and ignore the entry about an extra attack at S8.  He can also take melta bombs.

The priest can take up to 5 servitors for 15pts, with them upgradable to gun servitors and it being the only way to get a plasma cannon on a infantry model.  With Codex Inq, you really should be taking gun servitors from that one as they are much cheaper.  If you are taking servitors it is because of the bonus to fixing vehicles, three is about all you need as that gives you a 2+ to repair, and if you lose one or two you are still effective in repairing.  They are not cheap and you have to balance the effectiveness of them repairing vs what you are not bringing because of them.  Three servitors is almost an infantry squad.

The way to take them is to keep them cheap, and of course only if you have enough vehicles to make them worth even taking. A good way is to throw them in your valk/vendetta and let them keep the bird flying, then drop them off where they are needed.  With a 3+ a dangerous terrain test is not that scary so you can have him jump out and if a servitor or two die, oh well.

The other way is to keep them hidden near your vehicles, but out of sight from fire.  Move him up when critical vehicles get hit and repair it.  The most important thing is in choosing what to fix.  If one leman russ is on its last HPs, while the other has 2 left, repair the other to get up to full strength.  Unless its big guns never tire, let it die unless you have a high chance of it surviving.  Its better to keep one a full strength than to chance losing too.   It will change each game and if your opponent has limited antitank then it stand a good chance of working.

I like techpriests and certainly think they are useful in certain armies that have a lot of vehicles and they are best starting off in one to keep them mobile and protected.  Now I hope they lose some points and most of all the servitors get appropriately priced as they are expensive as is.  A pair of techpriests can work great if you have that number of vehicles to keep in the fight and can be worth the investment if you keep light on the servitors.  It can seem like a good idea to up gun them, but really they cost too much to do and there are other units that do it better.

All in all I am really hoping for a complete reworking of these guys in the next codex, as they are feeling their age and usefulness is not what it once was.  It will be very interesting to see if the new priest is included in the new codex, as that would be a huge boon and I would be taking them in an instant.  Both right now hurt from simply being a little too pricey and not doing quite enough to be worth it.  Hopefully that will change.

Posted by Grumpy Guardsman at 7:46 PM