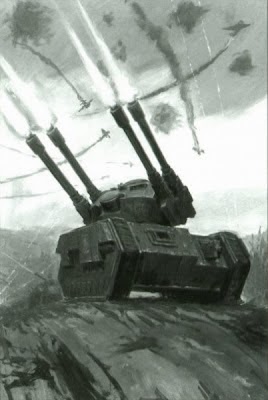 The last choice in the heavy support section is the Hydra Flak Tank.  Its another of the current FW models, but of the others it is prob the easiest to convert as long as you get your hands on a quad gun and some sort of chimera based huller, really any will do.  I have used a manticore hull and like the look, but could be better.  This guy is pretty straight forward, he shoots aircraft to make them groundcraft.  Same basic chimera profile with AV 12 10 10 and has a heavy bolter, smoke launchers and two twin linked Hydra autocannons.  You can take them in a squadron and they cost the same as a griffon (read cheap).  Though they are overshadowed by the other choices you have in heavy support, a case can be made that these are still a strong choice.

So the hydra has sky fire on its auto cannons, no intercept but that really isn't a big deal.  The autocannons are 72" S7 AP4 Heavy 2.  You have two and this is important, as it is not a fast vehicle, so if you move, you  can only fire one autocannon at full BS and the other is a snap shot.  It has the auto-targeting system which ignores the cover saves of skimmers and bikes.  This goes for all of its weapons not just the autocannons.  He can take the usual upgrades at the usual prices.  Camo netting is cheaper for Hydras for whatever reason, and are actually useful for this vehicle as it has the range that it will only rarely need to move.  That gives it a nice boost to cover and raises its survivability.  HK missiles may be worth it if you are taking a full squadron, as you can use that on say a wave serpent and want to get edge you need, it will still ignore the cover save, but is still BS 3 so only number of shots will have any affect, I would probably not take them as HKs are only effective in massed volleys.

The use of these are pretty obvious, they bring down air vehicles and skimmers.  I wish they got a BS bonus against bikes but that is ok.  Now also with the FAQ it can shoot at FMCs as well, so best not to forget that.  Though I'm sure most won't feel the necessity, they are perfect for punching tyranid FMCs out of the air.  They have a great range and can threaten most vehicles and MCs.   So I know people don't like that it doesn't have interceptor, and it would be amazing if they could, but they don't.  That being said, in the meta, most armies you will face have some sort of flyer's, skimmers, or FMCs.  So its really hard to not find a use for them.

Another advantage is to strip the cover from a jetseer council with the auto targeters and even though you will hit on 6s, if you have 3 thats 12 twin linked shots plus the 9 heavy bolter shots.  All in all you will be doing decent wounds that will hurt a very expensive unit.  These really do shine against the eldar, and make them pay for bringing wave serpents.  With a high number of attacks and ignoring their cover save, this alone is a great reason to bring them to the table.  And they really are cheap, you really don't have an excuse for not finding points for one.  The quad gun is cheaper, but you have to bring the aegis and if that doesn't fit your army then its a lot of points for just the gun.  And the Hydra has longer range.  Its a trade off and if you are bringing an aegis already, its definitely worth considering the quad gun.

These really benefit from squadron rules and since the autocannons hit ground targets on 6s, you need the number of shots after you have brought down their flyers and skimmers.  Really the hardest hurdle you will have in using them is just getting the model.  If you are in a meta of eldar and FMCs, this really should be a choice you should be considering as it will swing the tide back in your favor.

If you have lots of room in your heavy support area, then squadrons of 2 are your best bet, as you have less chance of overkill, but can still combine fire if you need to put wounds on a target.  Its a lot of autcannon shots that your opponent can't run away from.  It can give eldar bikes a hard time and make any flying anything regret showing up.

The point of not have interceptor is a non issue, one that would be a little OP.  The other is to not get wrapped up in having it or not and just shoot, once you start rolling dice you will find you actually get hits more often then you think.  The other reason is there really is a lot of skimmers and flyers in the game so you will have lots targets to make use of them, and their heavy bolters can always fire at ground targets normally :).  It gives something back and makes some of the current meta lists take a second guess and keep them in check.

There really isn't much to talk about in terms of tactics, they are best used in cover or with an invulnerable save (DA Libby) and are great at forcing your opponent to choose between flying his skimmers into autocannon death, or into an area that you can get close to them with other units and pop krak grenades on them.

This is really the best advanced tactic to use with hydras.  Place them in an area that they have good LoS, but also give an area of the battlefield for the serpents to go.  If done right, your opponent will fly out of your killzone into the other one you have created, the one that is close to your other units that can drop krak grenades on them and make them pay.  The best part of Hyrdas is that they let you pin down the famously mobile eldar army, forcing them to choose between two bad decisions.

This works well against just about any skimmer army and is obviously good against flyers.  I really recommend hydras and though this is hardly an in depth review, they really are not a complicated unit.  They are cheap and they shoot a lot of dakka at stuff that moves and makes them stop moving.

GG
Posted by Grumpy Guardsman at 8:27 AM