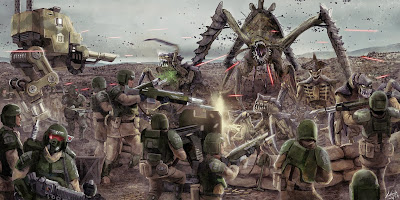 With the shadow growing ever closer, we will be facing the Tyranid menace once again and many guardsmen will die for the emperor to hold back the great devourer.  Tyranids are rumored to be released next month and with it the upsurge of the army being seen in play.  Now the tyranids have been always a unique army, and each new codex brings pretty decent changes to how the army functions which can make it difficult to prepare for.  But there are a few things we can expect to see as well based on the trends of the 6th ed dexs that have been released so far.  Now I have been fighting tyranids for a long time, my buddy that I got into gaming with played them so as you can imagine they are one of the armies that I fought and learned to counter early on.  I know, I'm awesome.  In all seriousness though they are a tough army to beat when wielded correctly.

Now what I see is most of the core units changing very little, tervigons will still poop out babies, guants will be cheap and in large numbers.  Carnifexs will hopefully get a points reduction and be seen more as they are one of my favorite tyranids.  Obvious is that they will be getting some sort of specialized flying MC for taking on other flyers(other than just punching them).  Most likely instinctive behavior will get an overhaul along with synapse and the psychic powers specific to tyranids.  I also see warriors making a comeback, they have been out of the picture for a while and I see them changing a bit to make them more useful to take.  Now the big thing will be whatever uniqueness that is given to the tyranids, space marines got chapter tactics, tyranids will prob get some sort of biomorph/evolutionary strain special rule to give them some flair and flexibility.

In all honesty I expect to see a return of some of the old nidzilla lists from ages past, and I now many tyranid players will be happy to return to their glory days, now it won't be the same thing but something similar.  Genestealers will hopefully comeback, they suffered more from their rules being outdated by 6th more than anything and hopefully will get the needed updates to make them good again.  And tervigons will still be there pooping out babies.

What does this all mean for the emperors meat shield?  Well IMO just more of the same that we have already seen.  MCs are 6th eds favorite child, and if you don't have plan to counter them already then you better get right on it.  So bring plasma, its your best friend along with a flamer for dealing with the bugs.  Now you will be facing a huge challenge if you are mech heavy, as once they get into you, enjoy the fireworks of your exploding tanks.

The key thing to remember when fighting nids is that even though their MCs are big and tough looking, most are not hard to kill and if you have the tools (Plasma, lascannon) you can whittle them down below the critical mass nids need to function.  Since nids need to close with you to come to grips with you and take you apart, they are not shooty and I seriously doubt that is going to see a huge change, you have to be able to hit them all the way across the board.  You need to begin engaging them as early and as far away from your deployment as possible.  Infiltrators and scouts are key to this, tied in to longe range artillery and cannons.  Sentinels are great for tarpitting guants and holding them back, forcing your opponent to waste a bigger unit's time to deal with them to free up their troops rather than popping one of your important units.

You need to think of it in a multi stage defense, engaging them in different phases and in each one dealing damage to their critical synapse.  A smart tyranid player will try and hit you in waves, and get you to engage each wave one at a time.  Don't fall into that trap.  For example he will put a large squad of gargoyles up front and move them straight at you.  What you will try and to is to destroy them before they reach your lines.  While in theory this is sound, you have to account for all the units following them.  Spread the wealth, you don't need to kill them all, just reduce them to a manageable number so they can't decisively engage your guardsmen.  Flamers are truly your best friend, both for burning the bugs up and also in the defense they give in assaults, which are going to happen fighting nids.

Early on you need to knock some of the synapse out, but don't be drawn into killing the tyrant, they are usually going to be the toughest ones to kill.  Knock out some of the weaker ones first and create gaps in the army.  Isolate the nids into islands of synapse that you can engage one at a time or force your opponent to move their critical synapse creatures to react to you.   If he has to start moving his synapse around to keep control of his army, then you are  on the right path to success.  Force him to choose between leaving his guy back to ensure his guants hold the objective in his zone, or risk it and move up to support the attack.

If you whittle him down, then the tyrant can only do so much on its own and you can deal with it isolated and keep throwing fire and bodies at it til it dies.  They key to fighting nids is break them apart into fragments that you can deal with, and to buy time against them.  Speed bumps are key to defeating them, hold their key units up, a blod of guardsmen can hold a tyrant up for multiple turns, keep a commissar around for stubborn and let the tyrant kill a few guardsmen a turn, by the time he breaks free you will have dealt with most of the army that he is no longer the threat he can be with the rest of his force to back him up.

Layer your defenses, so that he most go through multiple levels of guardsmen and vehicles before reaching your objectives and key units.  If you play the attrition game right, you will come out on top and with the objectives in your control.  Heavy weapon squads are scoring so keep them back to shoot and move them up to take the objectives, as most of your guardsmen will prob be dead by the time this is over.

Now this is one of those cases where I would caution against using large guard blobs, the reason being is you are concentrating your guys to be killed in one attack.  However if he has to choose between two or three units in order to kill the same amount of guardsmen, then he is splitting his fire instead of concentrating it.  I would also say that you don't want to completely castle up against them, your innermost layer needs a good strong point, but you need to engage the nids as far from you as possible, and having units out there is the best way possible.  You will hold a few of his units up for a turn in CC, and give you fewer targets to shoot which is a good thing.  You can concentrate your fire on those units not in CC and better achieve critical damage on them.  You will be buying space and time against them, which is the most important thing of all against nids.

I know guardsmen aren't good at CC, but guess what, they are better when they charge vs being charged, so against nids, you might as well.  This goes back to buying space and time, you want them you have to fight your units one at a time all the way across the board, rather have them all in one large nut for them to eat all at once.  After that unit gets through your guardsmen, then they will have to endure more shooting before they finally reach your lines.  When done right they will break upon you and fail to take your lines, having lost too much bodies and synapse across the board to carry the punch home.

It is going to be interesting to see where this new codex goes and how it will shape the tyranids army.  I see the resurgence of the guys in the middle, the warriors and carnifexs, the little guys and the big guys have been seeing the light for a while now, so I excpect something to be done to bring them back into the field.  This will see some new challenges but if you bring the tools to deal with multi wound MCs you will do ok.

Fighting the nids is all about target priority and getting time and space against them.  The guard can win the war of attrition, but you have to prevent the nids from hitting you with everything all at once, draw them in piecemeal and fracture them with their synapse.

Well that is about all I can think of for now, since the new codex is coming up shortly (hopefully) I will be putting up more specific tactics once details and army lists start appearing.  Until then let this be a primer to flex your mental muscles and start thinking ahead to the next bad guy to fight.

I really want to get a game in, unfortunately I forgot that my FLGS was having their big yearly sale so they had no tables and no one was playing.  So I have not been able to test out my inquisitor, but soon I shall.  Hope you all have a good weekend gaming.  I will be doing more painting, thank god it never ends :(.