8th Edition and the Astra Militarum 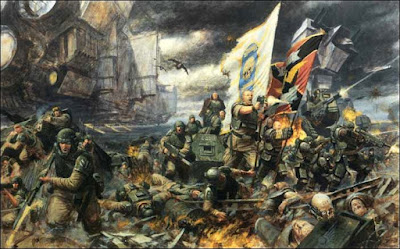 We have been getting lots more hints and looks at the new edition, including a tease of the new Imperial Guard, though I will point out nothing really of substance was in the tease other than "Units you haven't used will be good" sort of things.  However, enough is starting to coalesce to start really looking at the new edition through the Imperial Guards lense.


Some of the interesting things released, in part as a response to the current editions abuses has been how they have revamped how independent characters work.  Basically ICs can no longer join units.  But you cannot shoot at them unless they are the closest unit to the firer.  So, in substance the outcome is basically the same as we have done.  You are still going to hide your characters, not much differently than before but it should prevent a lot of crazy combinations.  Commissars will help with dealing with battleshock but how specifically is not mentioned.

It does look like the standard russ will be making a comeback in the new edition, with the stats for the tank and the battle cannon released.  The russ will have T 8, 3+ save and 12 wounds, and the battle cannon, since blasts are no longer in, has a modified stat line that actually is pretty good.  Same range of 72" and is Heavy D6, so potential of 6 shots, with S8 and AP -2 and Damage of D3.  So that means each shot has a potential of 3 wounds.  All in all the battle cannon looks to be extremely versatile in taking care of a group of enemies or knocking a lot of wounds off of a tough target.  They did discuss that "blasts" will be decent against large groups but anti infantry weapons will end of being slightly better.  Another note is that ordnance is gone from the battle cannon profile, and I would not be surprised to see ordnance go away altogether.  Will be interesting to see with that.

Another nice change is that twin linked weapons will now give you extra shots, rather than re-rolling to hit.  Overall I think I prefer this, as it essentially is the same but better, as lets say you have a heavy bolter, you roll 3 and then re-roll the misses, with the best being 3 hits.  Now, you're still statistically likely to get the same results as in terms of number of hits, but are more likely to also get more hits, as you'll be rolling 6 dice for that heavy bolter.  I can see things like hydras seeing a lot of table time.

Heavy weapons no longer snap fire when you move, which is good for models that this affected, as you now have only a -1 penalty to BS, but this will also affect vehicles as well.  Now this is the overall general rule, so I would not be surprised if vehicles will get ways around this, as otherwise this will hurt a lot of IG vehicle shooting.  Units though can split their fire now between different targets, so you can fire lasguns at on unit, lascannon at another, and a flamer at another.  Note this is units, not models, so tanks will still most likely be shooting at a single target, but squadrons will be able to split fire.

Orders now are automatically passed, so no more leadership checks!  Only order we know is in is first rank fire, making the lasguns and hot shots Rapid fire 2, which appears to be 2 shots to max and 4 at half range.  Otherwise don't yet know what the rest of the orders will look like.

With the changes to assault, charging with a IG unit is something plausible now, though tarpiting will be far, far harder to do since units can leave combat at will.  But since guardsmen can go first when they charge, a large unit of them can at least get some good damage in before the return swings, making charging more viable for standard troopers and also a boon to ogryns, though not really enough to make them good in my opinion.

While there are still quite a few things left to learn, really what we can see is that infantry will still play a crucial role in the imperial guard, though specific tactics will change.  Tanks like the leman russ will be seeing a resurgence as well, and will be interesting if orders will be revamped for them also.  Overall, the IG have a lot to look forward too, and if the battle cannon is anything to go by, then artillery should come out pretty good as well.

Cadia Stands!
GG
Posted by Grumpy Guardsman at 10:01 AM