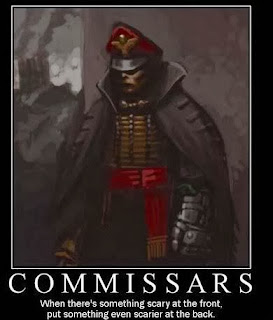 Ok so continuing on through the Imperial Guard codex and the time has come to cover the Iconic characters of the imperial guard: The Commissars.  These guys are the backbone keeping the flabby meat that is the guardsmen in line and moving towards the front.  Many are the tales of heroes of IG Commissars holding the line and driving back the alien and heretic hordes.  I love the fluff of these guys and they really give the IG a flavor that they would lack, a certain grimdarkness if you will :).  Anyways lets get on to the meaty bits.
The IG has access to two different Commissars, one being the Lord type and the other being the normal ho hum commissar.  So for the rules, both have stubborn and give it to their unit.  They also have their own special rule called a Summary Execution which boils down to if the unit fails a morale check, the commissar executes the leader, then they re-roll and if they fail again then they run.  Combined with stubborn you now have a guy that keeps those scardy guardsmen in line.  Now the Lord has his own special rules in addition to these, the first being he is an independent character.  The second is aura of discipline which gives his leadership to any unit within 6" for any leadership test except for psychic.  So if you have not caught on at this point these guys are there to buff your guardsmen and harden their spine.

The Lord Commissar first.  So he has Stubborn, is an IC, has Aura of Discipline(AoD) and Summary Execution(SE).  He is WS 5 BS 5 had A3 and LD 10, everything else is IG standard.  He is the same cost base as a primaris psyker.  He has a CC weapon, bolt pistol, flak armor, frag and krak, and a refractor field.  He can take a boltgun for free, P weapon and P pistol for 10, a power fist for 5 more, carapace armor or camo cloaks for 10, and melta bombs for 5.  And thats it.  Now it really depends how you want to run this guy but I usually give him a power weapon and a p pistol, maybe carapace if I am running him with my Carapace Army.  What he does best is being stuck with squads or in an area that can't get a commissar.  Personally though, I like to put him with an infantry squad or my CCS that stays back.  The key with the lord commissar is not to be fooled by the WS BS 5, he is not really a combat character, sure he will do in a pinch and you can spend points to make him that way but you really shouldn't.

He is best used when taking advantage of the AoD and giving his Ld and reroll to units that need it most.  The big one being heavy weapon squads, they can't get vox's and having that reroll at LD 10 even for orders, that means you are shooting the crap out of what you want and your orders are going to get off.  He can be good with a blob, but a regular commissar can get almost as much bang for your buck.  The problem I have with this guy, even though he has some great stats, is that he is too expensive to be a mandatory HQ choice to take, especially if taking as allies since you can get a CCS for 50 if you keep it bare.  This is a good second HQ choice, especially if you are taking the combat oriented CCS.

There are two types of CCS, the combat and support.  The combat has all the guns, the support has the flag, vox, a weapon or two and advisers and is their to support the units around it and buff them.  He is good if you are taking the combat one to make up for the lack of buffs you will be missing.  Since you don't have voxs for rerolls for orders and the flag to reroll leadership.  The Lord makes up for that and gives you the needed boost to hold your line while your CCS runs around blowing stuff up.  You can roll him with the support CCS, but he is expensive also so you are paying a lot for redundancy that only is within 6" of the lord.

The best way to take this guy is as a back up, keep him with your infantry and in a place you can take advantage of LD 10, this allows your CCS to run free.  Other than that, he is expensive and really isn't that great, if he started with a power weapon and/or carapace then maybe it would be different.  Don't get caught in the trap of bringing him with conscripts, that is not worth it.  Bring Chenkov if your going that rout and buy SITNW.  Otherwise the Lord is ok, he is costly but can hold the line and keep your guardsmen fighting till the bitter end.  Don't get brave with him and go challenging space marines.

The regular commissar is a different beast.  They can only be taken with PCS and Infantry Squads, they are taken as an upgrade for half of the cost of a lord, and have the same wargear minus the refractor.  You can buy similar upgrades, a power weapon, pistol, boltgun, fist.  Now these guys are not independent characters so they are stuck with the squad that buys them.  These guys are best kept cheap, don't go crazy with upgrades.  I would say go for a pistol or go for a CC weapon, not both.  I would say most cases just go for the P pistol, save your points for the CC weapon on your sgts.  You really don't want he commissar in HtH, he needs to alive to the bitter end giving rerollable stubborn rolls.

The best way to take these guys are in guardsmen blobs, the reason being you only have to get one for 5 squads to benefit from.  Now I personally only like 20ish blobs, but that is me.  They work best in this situation to give stubborn and the reroll.  Now they do compete with inquisitors but they do have an advantage in that you get to reroll your ld test.  Statistically you will pass that more often then Ld 10 stubborn.  So if all you want is someone to keep your guys fighting, grab a cheap commissar.

The other way to use him is to add a decent combat body to a PCS. If you like throwing your PCS into CC, add the commissar and give him some weapons, some thing that is different from the PL, so if he has a sword, take a P fist on the Commissar.  This gives you versatility with them and can reliably kill thing in CC.  Now if you are worried about him shooting your oh so valuable PL, don't, most concentrated fire will kill them anyways and if he does shoot him, well a PL is not that valuable so you'll live.

I like basic commissars, I like that I have two chances to pass stubborn.  If your blobs are going in to CC, take this guy over an inquisitor as you will get more bang with stubborn and rerolls.  If you aren't and want a character that buffs more go with the inquisitor.  I know the inquisitor is now the key competitor for the commissar, but its like comparing apples and oranges.  The inquisitor is a buffing unit and he brings more of a support character feel.  A commissar is there to get in the thick and keep the guardsmen fighting.  They will keep a blob tarpitting an enemy far longer than an inquisitor and really do your want an inquisitor stuck for 4 turns in CC?

Now while we are on Commissars, lets talk about the big boy himself: Commissar Yarrick.  He is expensive, cost the same as a leman russ with lascannon and heavy botlers.  He comes with Carapace, power fist, storm bolter, pistol, cc weapon, frag and krak, force field, and bale eye.  The force field causes any wounds that are allocated to yarrick to be rerolled and the bale eye is a hot shot pistol that he can fire in addition to his other weapons.  Now he has AoD, he has inspirational hero giving his unit fearless and units within 12" stubborn and get re rolls to hit on first round of combat.  Iron will means if he loses his last wound, roll D6 and on a 3+ he come back to life with 1 wound.  Note there is nothing that says he can use this multiple times.  He has eternal warrior as well, this is amazing since even though he is T4, he can still be easily ID'd without this.

The problem he has is that he doesn't have an actual invul save.  The force field forces the wound to be rerolled, but a lascannon wounds on a 2+ so chances are he is taking that wound.  With only carapace armor he is very vulnerable.  To be honest, he is way to expensive for what he brings.  the same amount of points can buy you a lot in ally characters.

But if you are bringing him, he works best with lots of guardsmen around him.  I would not bother with a CCS, unless you can find the points.  This is an army that has lots of grunts and it moves up and attacks aggressively.  Get close and make use of the wide spread stubborn and high leadership that he is handing out.  He is also hands down the toughest guy we have in combat.  He gets 5 attacks on the charge and can deal with most things with his power fist.  His big thing is Iron will, he can just keep on getting back up, but with 3 wds he will die and eventually he won't get back up.  He can't be relied to punch the entire army you are facing to death.

All in all commissars are still a solid choice and work best in the large infantry armies of the guard.  The lords are a great back up and buffing unit that can keep the core of your army in the fight.  I hope they get more availability and lose some points as they are a little expensive(Lord especially).  Will be interesting to see in the new codex though.
Posted by Grumpy Guardsman at 6:51 PM