Imperial Guard Pushfit Models: You Asked For It 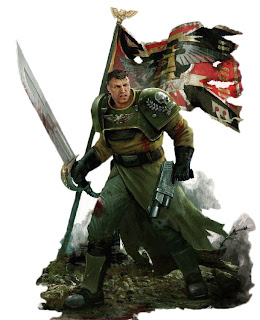 So the most recent rumor to have come out is that the new Steel legion and some other IG infantry are going to be pushfit a la Chaos Cultists.  Before you start whining, I would like to remind everyone that this is exactly what everyone has been asking GW for.  Oh no you may say, I never asked for push fit models.  But you did, you see everyone has been complaining and griping about the cost of models, finecast, and how overpriced in general GW is (Those mean people trying to run a business).  So shockingly they have listened, since a company relies on its customers to stay in business.  So they are making the changes you have asked for.

In order to bring you more affordable models, GW has to cut production costs.  How do they do that? Well simple they make easier to produce models, making it cheaper to produce and lowering the cost on your end.  Hell they already have it available, look on GW right now under the IG troops.  What you see there is the kit of 5 cadian troopers.  So for $20 you get ten guys that the regular kit costs 30 for.  Yeah you will miss on a few weapons and options, but if you are looking to fill your ranks, that is the cheap and easy way to go.

While it may come as a surprise to some that GW listens to their customers, last year was proof that they do.  Never have we seen such a rapid release of rules and models.  Some will cynically say that it was just to make money.  Well no shit, they are a business not a charity and despite what you may believe they don't make models for the pure thrill of it and to cater to your capricious whims.  So now we will be getting what everyone has asked for, a cheaper hobby.  Finecast is gone, push fit is here.

And one thing I found so funny about the complaints on finecast was that the same people that complained about the bubbles and the required cleaning, were the same people that would coo over FW models and state that the occasional bubbles and imperfections in FW were so worth it.  Yeah ok, so if GW does they are evil bad people, but FW is amazing and I love them so and they can do no wrong.  I have purchased both FW and Finecast and had the same imperfections in both, but one is apparently unforgivable.  So no more will we have it.  Thankfully GW is going towards an all plastic range, but the cost of this is going to be more pushfit, especially for models in their armies that are not high selling.  Its cheaper for them to produce and focus money on the models that sell.

Now have ranted for a while and talked about all this doom and gloom, this is still not the end of the world.  I have a few pushfit models since I have Dark Vengeance and they are by no means horrible.  The cultists especially are decent sculpts and different enough that you won't notice too many copies unless looking closely.  Yes diversity is lost, but as the rumor goes GW is only planning on going pushfit for core units, not the whole range.  So with clever modeling you can still modify them and lets be honest, pushfit is still easier to mess with that metal.

So Steel legion will be pushfit, well if the sculpts are good it may not be such a horrible thing.  I do hope that the veterans and stormtroopers are full fledged models, but they may end up being push fit as well.  If this is the case, well if they look good enough then it may not be too bad, but I will still be sad.

Before you complain though, remember that if you have ever said anything about the hobby being too expensive and GW needing to lower their prices, well you are getting exactly what you asked for.