Changes for The Leman Russ 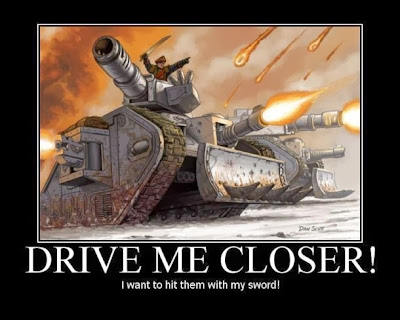 So this is fresh off of Faeit's presses.  Short of it is that the Leman Russ should be getting some significant updates.  Now part of the rumor is about 7th, but I am of the opinion that 7th is a ways away and people are misreading a consolidated rule update/limited release for a new edition.  But regarding the Leman Russ, it looks like it will be getting some significant buffs to its toughness, more than just getting an extra hull point.
Now what this could end up being is an interesting possibility.  What is likely is that it will remain a heavy vehicle, get a 4th hull point, and special rule that allows it to ignore shooting attacks on its front armor based off of a roll (4+ for example), that or it may get It Will Not Die.  I am really hoping on this, the ole Russ took a big hit with the FAQ update that made it a heavy and dumped lumbering behemoth.

Personally I would be happy with losing heavy, as it gives little advantage to the Russ, there is some but only being able to move 6" is a handicap that can be hard to overcome for some of the shorter ranged variants.  What would be nice is a way for it to get flat out back, perhaps random roll to determine distance.  What could be an option is a short of all power to engines/weapons, where you get to choose, if you do weapons then it is heavy and can fire all of them and move 6, if engines then you can move 6 and then flat out but cannot fire.  That could be an intersting way to bring the russ some needed utility.

In all honesty I doubt that will happen and it is pure wishlisting on my part.  Heres hoping though, as no matter what way you cut it, the russ is a little lacking compared to what it once was.  But it is good to know that they are looking to make up for the disadvantages that heavy brings.

This I will be paying close attention too and look to see more in the future as I am really excited to see what this will bring to the Imperial Guard.