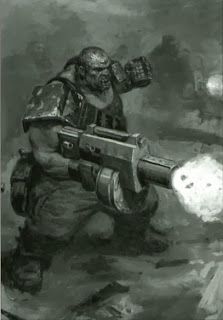 So I am trying to get through the IG codex here before the new one drops, after looking over what i have covered, things are looking good.  The troops and fast attack section is done, elites is only missing a few, same with HQ.  The only big one left will be heavy support, but that's ok I will get to it.  Today though will be a short one on Ogryns.  Ok first off, the only reason you are taking these guys is because you absolutely love them, not because of their utility.  The main reason is that they cost way too much.  For the cost of three Ogryns you could get a basic platoon, thats 25 guardsmen to 3 Ogryns.  So yeah....bit of a points difference.  Ogryns cost as much as a terminator, because to hell with it, they look tough so why not.


They are expensive, but from a pure stat base they are not bad.  They have WS4 BS 3, S & T 5, Ld6, A3 and a 5+.   They have low Ld, but that's nothing special in an IG codex, same for their save.  They also are bulky and have furious charge.  The Bone'ead has an extra attack and Ld.  They are armed with ripper guns S5 18" assault 3, which are not too shabby.  They also have frag and krak grenades.   So from looking at all that, its quite obvious that Ogryns are meant to punch things and make them dead.

I have talked about how retardedly expensive they are, but if you want to take them the question then arises how to use them.  Well the first is to take 6 and throw them at a chimera, keep them in it till you need it and then send them in to hold up the fight and drag units down.  At this point you should also have a lord commissar nearby to let them take his Ld as if they lose a fight by one wound, they will run or get swept rather easily.  You may think that is hard, but they don't have rending or any power weapons an T5 isn't that great when you only have a 5+ save.

If they were cheaper, you could throw them at something and not be too worried about losing them.  Since they are so expensive you can't just fire and forget them.  They are tough, but there is plenty of S6 weapons out there that will wound them on a 3+ and ignore their armor.  3 wounds sounds like a lot until you start taking them away with no recourse.  So either hide them in a chimera or keep them back.  They have a good use as a counter assault unit and speed bump.  Here though I would not take more than 4, and really the base squad is enough.  Hide them behind a hill or in a bunker and when your enemy comes expecting to break through your lines, send the big retards in to smash shit and die for the emperor.  The ONE big advantage these guys do have is that no one takes them and as such very few know what they do.  If you go up against a slow unit or anything without power weapons, you can do some damage and at the very least tar pit for a few turns.  They also are good against other units similar to them, like tyranid warriors, who like ogryns don't have the low enough save to just rely on their toughness.  Now ogryns have higher S & T so they can punch hard and with FC they are no joke on the charge, they can be a great way to remove T3 multi wound models as well.

Now if you are taking them, then in my opinion you might as well go full retard and just fuck it.  Take a full squad of them with yarrick and throw them  in stormlord(the vulcan Mbolter one) charge across the board like a crazed drunk screaming the whole way and go punch stuff till your dead.  You might as well at this point, because there really is no pretense with ogryns being points efficient so just have some crazy fun.  And you know what?  That crazy combo might actually work, its so crazy no one would expect it.   Of course all you would have left in points for is some guardsmen, so hide those bastards in reserve or dig them into cover and hope the stormlord makes it across :).

As they are, Ogryns are fun but almost twice as much as they should be.  If they were cheaper then taking a ten man squad could be worth it as you have enough wounds to get to the fight without losing too many.  Until the new codex drops and we see if they change, I would say take them if you like them, they can be fun but they are by no means efficient.  From a pure stats perspective, they are pretty good, its just the points that bring them down to the no go level.  Anyways I am really hoping they are cheaper in the new codex as I have ten of them waiting to be used, and hey maybe yarrick will join the ugly fuggers.

Posted by Grumpy Guardsman at 9:28 AM