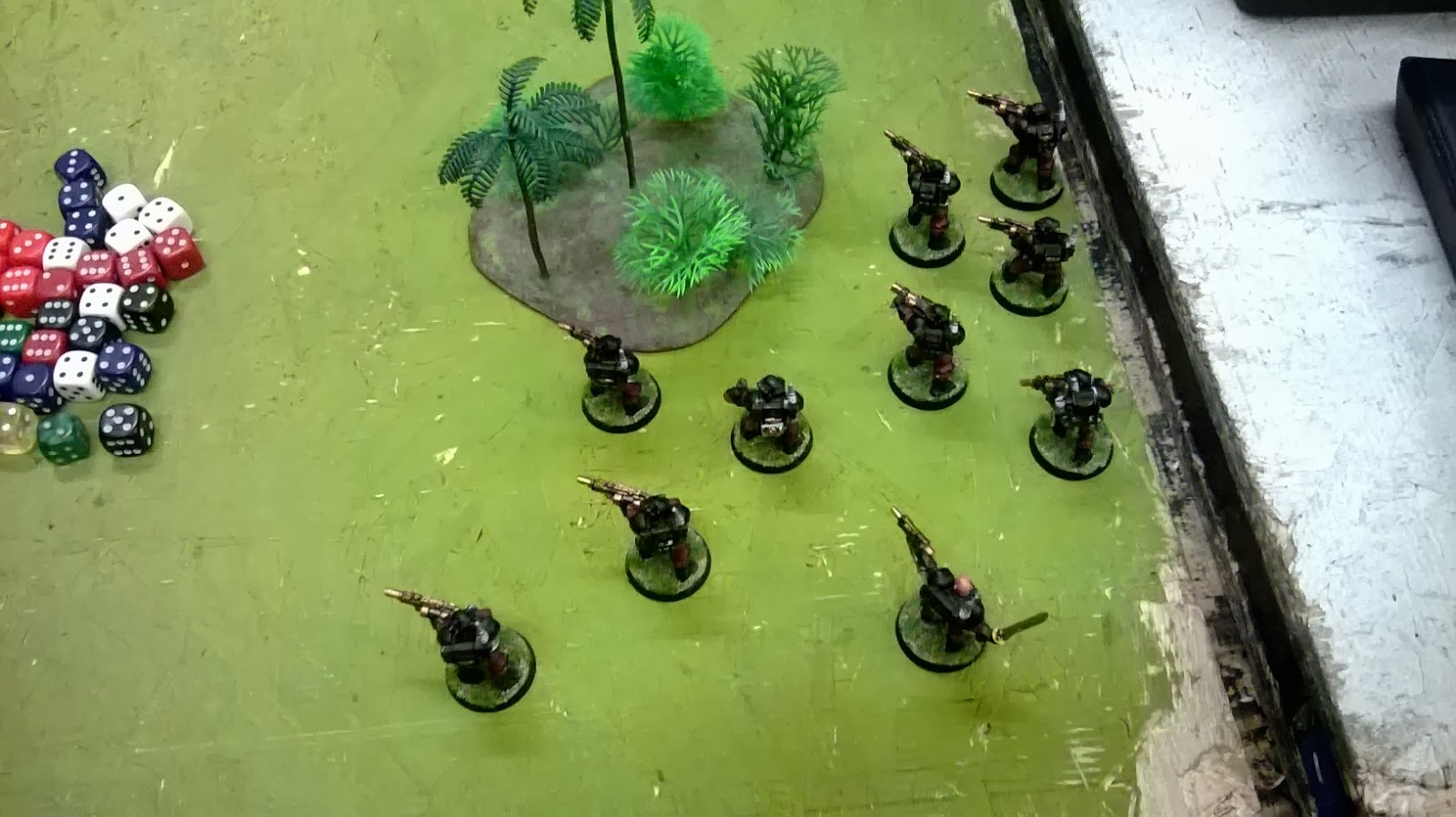 Got in another game of kill team last night and again had a lot of fun.  My buddy brought his space marines and I brought my storm troopers, just to see how they would do.  I had a theory that since I could give them all infiltrate, it would make a huge difference for STs in Kill Team.  They are expensive though so I only ended up with 10 of them at my 200pts.  Sgt had a power sword, had one plasma gun an done melta gun ant that was it.  The sgt was my warlord and got the trait with a  4+ seize, I gave the plasma gunner preferred enemy, master crafted the melta gun, and made one troopers shooting attacks poison. 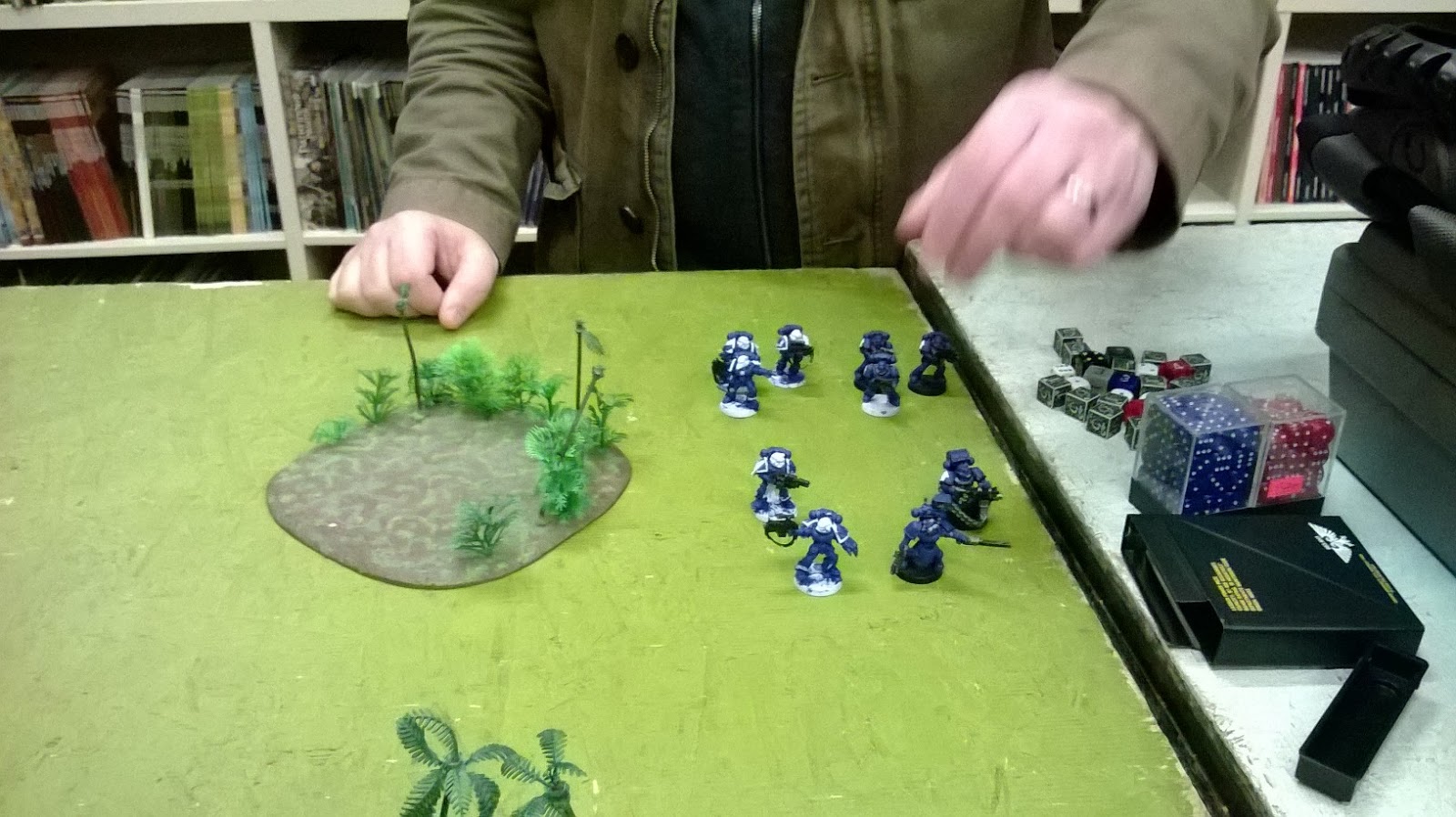 Now he had 10 guys as well, he brought 5 tacticals with a heavy bolter, and 5 sternguard, the sgt had a power sword.  His sternguard sgt got the specialist trait and he gave him ignores cover.  The heavy bolter got relentless, tac sgt got furious charge, and a sternguard got blind.  So we played the mission that was basically annihilation.  3 Vps for warlord and 1 vp for each specialist, plus the secondaries.  He won the roll off and placed first, there was no night fighting.

There was a large hill in the center and he deployed near the edge of his deployment zone in his corner, with the sternguard and the heavy bolter on the right, and the tacs on the left side.  I then infiltrated behind the hill, with my STs massed towards his tacs. I seized the initiative.

First turn I moved around the corner of the hill with as many of my guys and targeted his 4 tacs in teh open, after shooting I ended up killing all of them.  Ran a few guys in the back that didn't shoot and got them closer for the next round. 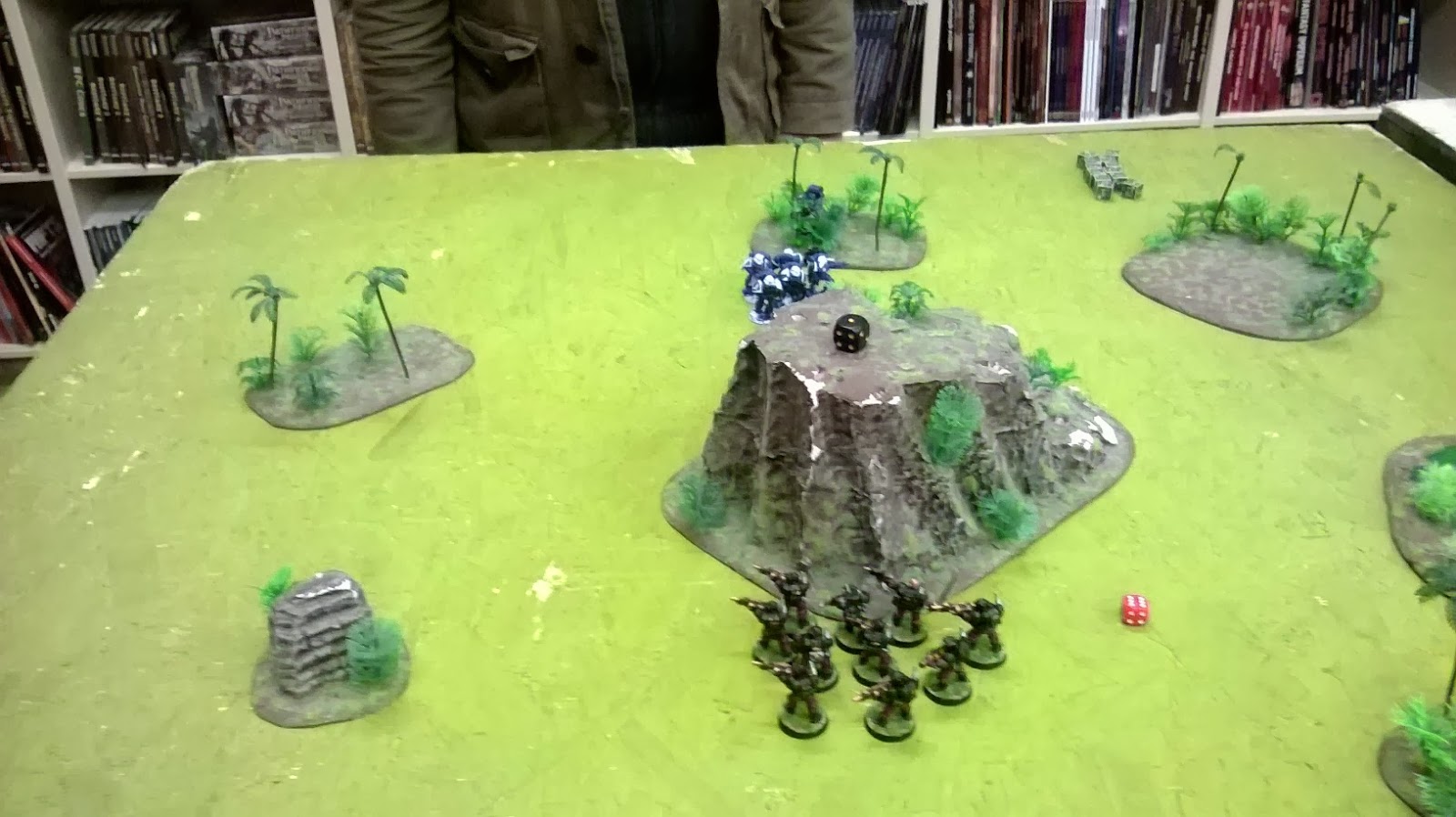 His turn he moved his heavy bolter out of cover, but still had no LoS.  His Sternguard opened up, but he targeted my plasma gunner first who was in the middle and since they are independent units now, thy give cover to each other.  So I got a couple of good cover saves and a really lucky blind save as well.  He ended up removing two of my front STs.  This is the thing about kill team, target priority is hugely important in this game since every single model can provide cover.  So it is absolutely worth it to just go for the front man and get the kill, rather than risk the cover save. 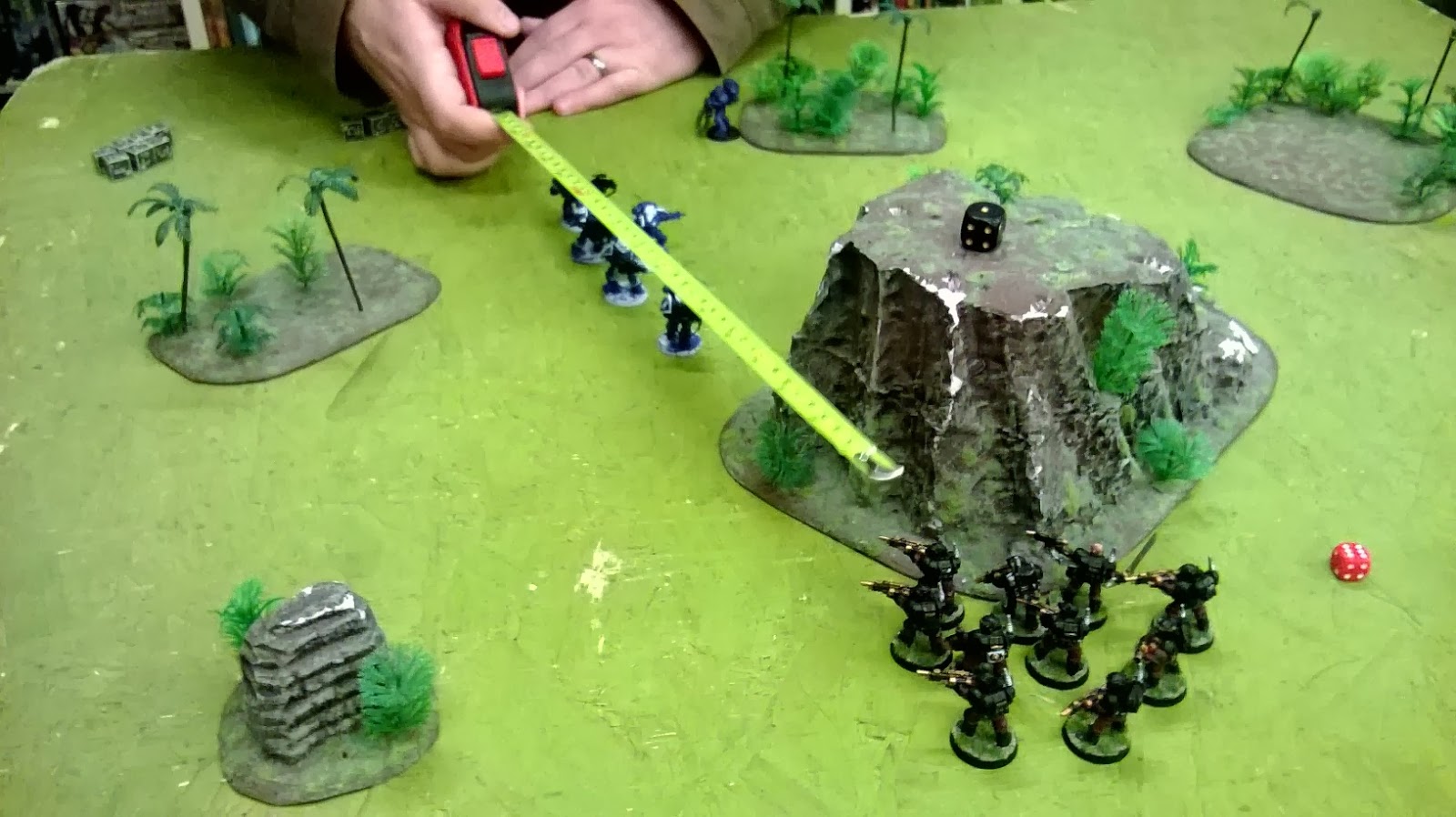 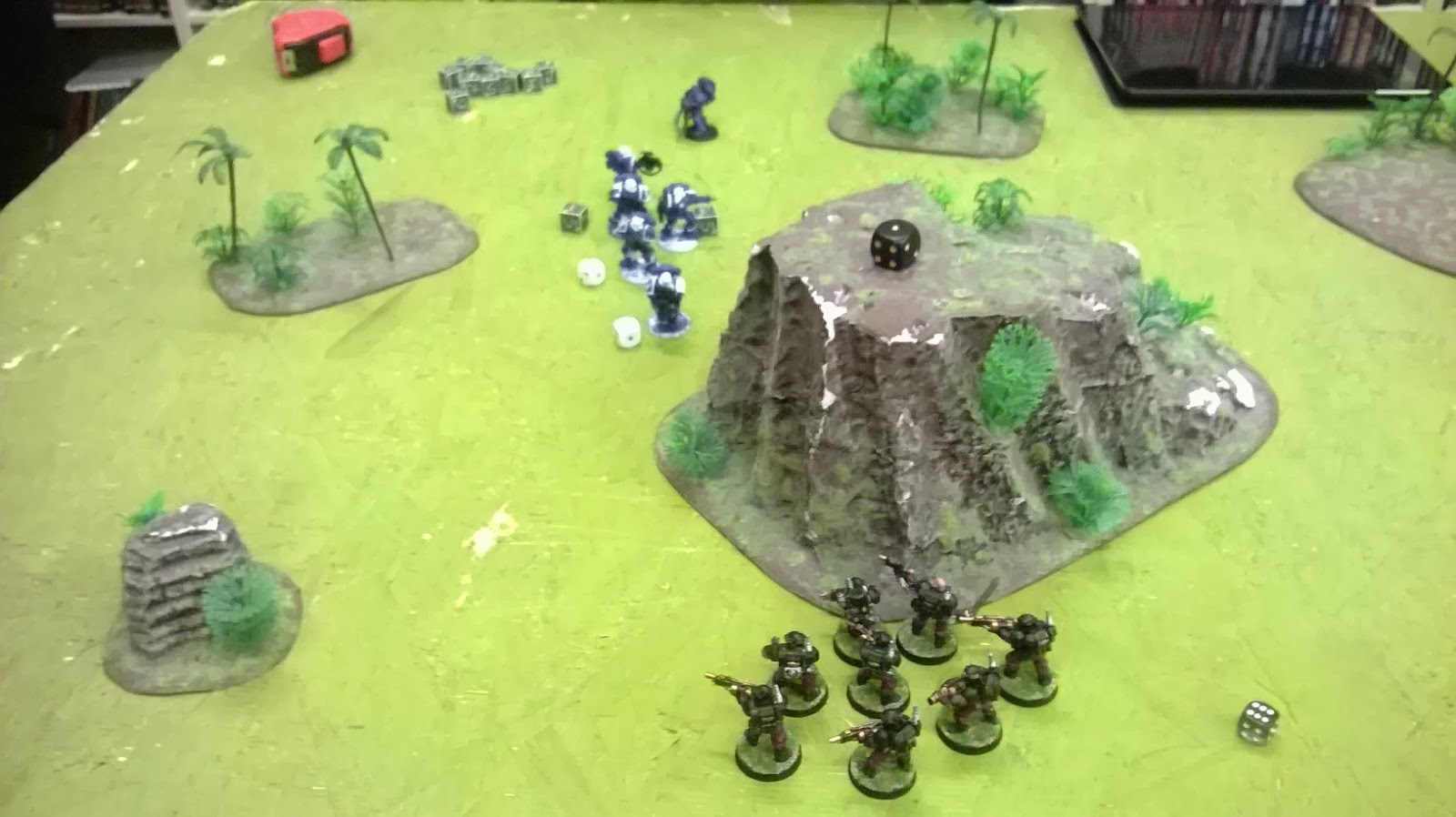 I moved up and put a few regular guys up front to keep my plasma gun covered.  I opened up and killed three more marines, causing a break test and his sgt failed both his rolls.  I was out in the open but he only had two left. 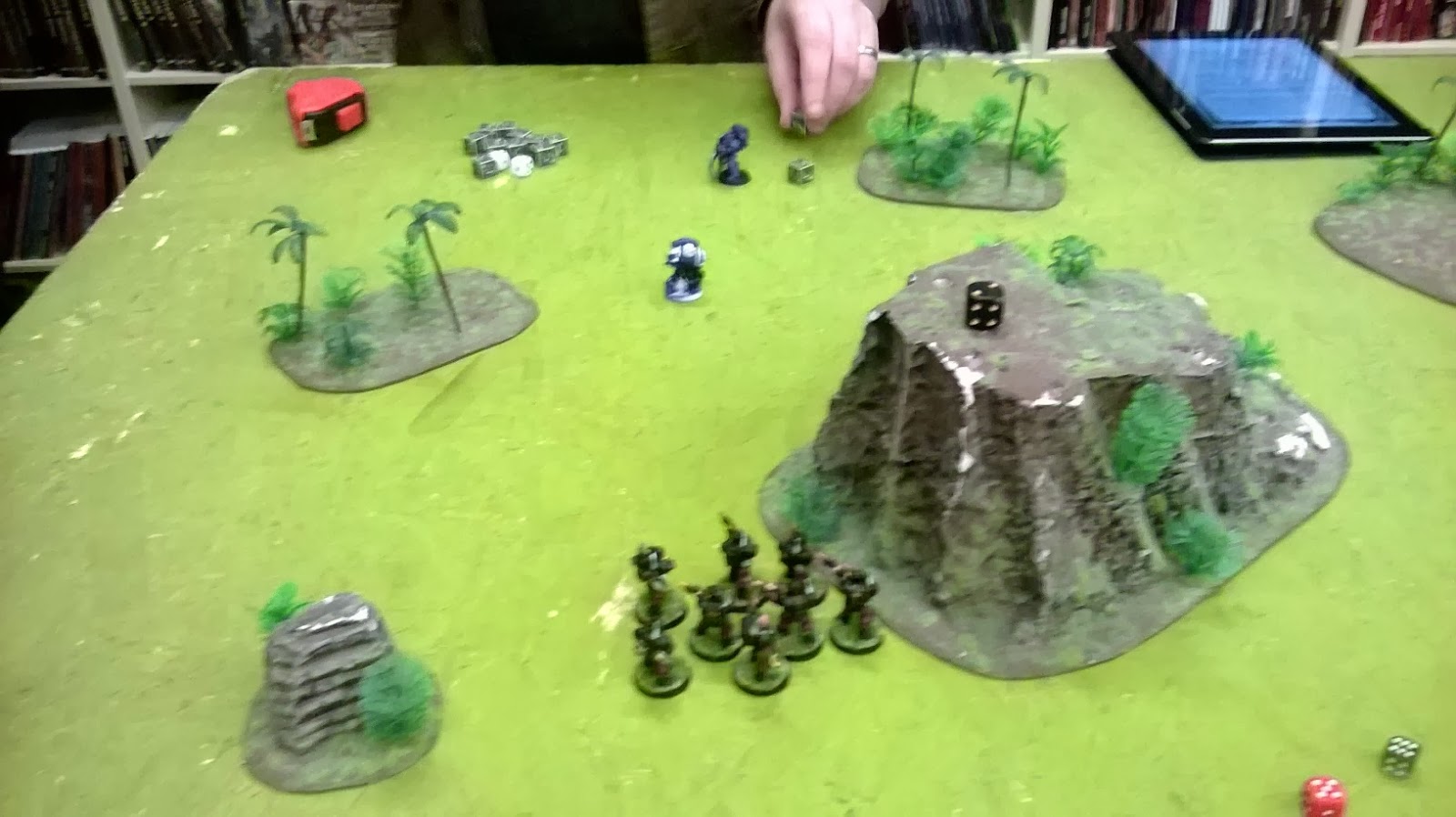 He moved his sternguard into the terrain to the left and then moved his heavy bolter, just failing to get into that terrain.  He killed two more storm troopers, one being the specialist with poison.  My turn I moved up in between the two marines and killed them both. 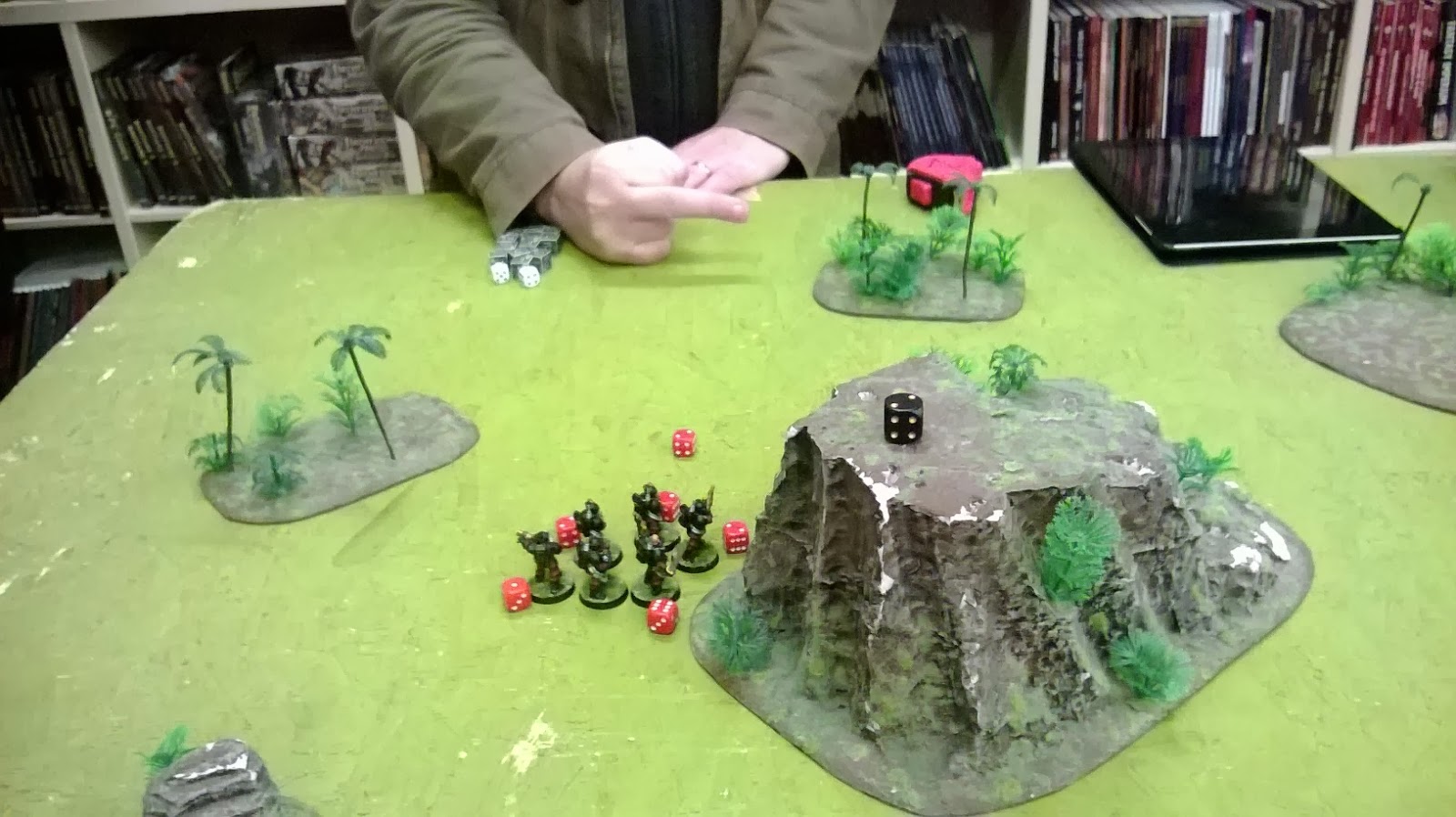 Game ended and I had slay the warlord, break and line breaker plus the vps for 9, he had killed two specialist and had 2 vps.  I will say that is a lopsided result as I used terrain to my advantage and was able to keep my guys out of line of sight and then mass on a small part of his army.  Having an entire squad of infiltrators is a huge advantage in kill team.  Though I would normally say that storm troopers are overpriced, in kill team they can make maximum use of their special rules that you pay a premium for.  So if you are wondering if STs are good, the answer is yes.  The specialist rules bring them up a notch that helps majorly.  My plasma gun had preferred enemy and that save him from a few ones that I rolled and turned a dead model on my side to one on his.

I am seriously impressed with them, though I may try a small squad of them with a few special weapons and then a vet squad to give more numbers and see how that works.

GG
Posted by Grumpy Guardsman at 10:26 AM