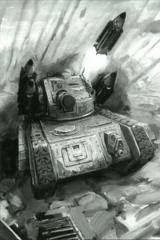 ﻿For part II I will be finishing off the IG artillery.  This will be about the Manticore and the Deathstrike missile launchers.  These were the new kits that were added when the codex came out, and one definitely has seen more use than the other.  While the deathstrike is cool from a fluffy sense, its far too unreliable to be relied upon in regular games and expensive for a one shot weapon.  That being said it is fun to use and great for Apoc or large 40k games where there is enough that it can reliably be used and isn't such a screaming target.  The manticore has made its way into one of the mainstay's of the IG artillery and it's not hard to see why.  It can have up to 3 large blasts a shot and it has high strength and is decently priced.  I really like the manticore and its a great unit if you are looking to add cost effective fire power and don't want to go all in with an ordnance battery.

Manticore:
The manticore is 20 pts more than a colossus, so it isn't cheap but it also is not expensive since one is usually all you need.  It is not open-topped, has AV 12 10 10, heavy bolter, searchlight, and smoke launchers.  Its main weapon is the Storm Eagle rockets, of which you only have four.  This seems like a weakness but really isn't.  This is a high priority target and will be targeted early, so chances of it surviving a long game is unlikely.  Also you may be moving to get into better position a turn or two to get away form flankers or other units and/or get into cover.  So yes there will be times when you run out of ammo but at that point you have something that has a heavy bolter and can still tank shock, or you can take the flamer and go the same route both are  the same cost so it comes down to your choice and what you like best.   It can take all the normal upgrades for vehicles, none really jump out but if you want to take them go ahead.

The rockets are 24"-120" S10 AP4 Ordnance Barrage D3 large blast.  This is a great all rounder artillery piece.  It can have a possible 3 large blasts per shot and is a great way to have the firepower of an artillery battery for cheap.  If you are not looking at dumping money on basilisks or other artillery and want to spend points on an other part of your army, this is the way to go.  Its a great tank that can threaten just about anything on the board.  Yes its only AP4, but when you are causing that many wounds, it really doesn't matter.  Where this tank can really shine is stopping an armored advance.  You get 3 large blasts and you can stop a rush of armor heading across the board.  If they cluster up their vehicles this is the perfect way to hit multiple ones and really hurt their vehicles.

As far as tactics go, this tank is great for throwing in a corner and aiming at the largest concentration of your enemy and then just blast a way. That is mostly all there is too it.  This really isn't a subtle tank, it fires big bombs and make stuff goes boom.  The reason you are taking this over the other artillery is cost effectiveness.  It is hands down the most potentially destructive of all the artillery for the price you pay for it.  You can't take a squadron of them, but you really don't need to.  If you are looking for some firepower to plug some holes in your army, this is the guy to take.  If you have points to spend, some of the other artillery may be better and more specialized, but its really hard to argue with a potential of 3 S10 large blasts.  Now you will have games where you are not lucky and only get one blast off each time, but on average you are getting two blasts for most of your shots.  I really like the manticore and would only leave them behind if I wanted more artillery and reliability.

Deathstrike:
Ok so this is the scud missile of 40k.  In the fluff section it talks about annihilating entire armies with massive explosions and titan felling missiles.  Alas this is not really the case, but it is still a cool tank and it is still nice when the big bomb goes off and takes a bunch of things out.  It is the same cost as the manticore and has the same upgrades.  It has unlimited range because fuck it why not.  It has side armor 12 but is other wise identical to the manticore.  It has its one shot missile which is S10 AP1 with a D3+3" blast, is ordnance and barrage and ignores cover.  Its actually pretty decent weapon, its just one use and only fire based off a random roll.

The missile fires based off its own special table.  It cannot fire turn one, or if it has moved that turn. Starting turn 2 you roll a dice and apply modifiers.  It gets +1 for every turn it has been on the table, -1 for each weapon destroyed result allocated to the missile while preparing to fire, and -1 for if it suffered any crew stunned or shaken the previous turn.  On a 6 the weapon fires, note a natural 6 always results in the weapon firing.  Also note the missile itself can never be destroyed.

This is a fun centerpiece and can certainly make a big boom, but realistically its only one shot and with access to D weapons now, you can certainly get access to far more destructive weapons that can also fire multiple times.

Its a fun unit and looks cool. It certainly isn't worthless, far from it, S10 AP1 ignores cover is no joke.  But it really isn't cost effective and you can get access to that fire power for cheaper and can fire more than once.  If you are bringing this, nothing wrong with it.  It certainly is cool and has its uses.  Personally I think it works well in Apoc where the range it has is great.  If you find some fun players you can be a snarky ass and fire your missile into another groups game just because. I have heard stories of people firing it at games in other stores :).

So that wraps up the missiles and artillery and they really are the solid fire base you need to build your army from.  We don't have monsters or bio engineered warriors with mini-missile launchers, we have a fuck ton of tanks and artillery and we bomb the crap out of everything and make it dead some more.

GG
Posted by Grumpy Guardsman at 10:40 AM