Thoughts on Special Characters and the Next Imperial Guard Codex 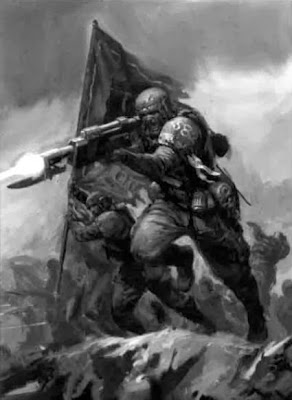 With the next Imperial Guard Codex coming up soon, I want to talk about what that is going to mean for you and how you are going to play.  Now we have very little in the way of rumors of how the rules for the army itself are going to work out, but we do have GW itself as a guide to give some pretty good guesses.  So what has GW done so far in 6th and how does that help us see what is in store for the IG?  Well the best way I can put it is that GW has put the fluff into rules, look at the Tau with their new special rules and equipment.  Eldar have battle focus and other ways the army works that allow for fluffy builds.  Daemons got randomness with their randomness.  So what does that mean for IG, and importantly, our special characters?

Well the best codex to draw conclusions from is the Space Marine codex.  The reason being is that with its inclusion of different Chapter Tactics to differentiate between chapters to allow for more fluff based armies.  Now this is a major separation from 5th, where you brought a character to make your army "fluffy".  Now you choose, and that limits what characters and units you can bring.  I see this happening for Imperial Guard.  The IG has similar diversity, only in regiments, not chapters.  I know many want to see those rules be based around type of regiment (Infantry, Armor, Artillery etc) but this will most likely be based on what home world the regiment comes from.  So you choose a Cadian regiment and that gives you access to a certain set of rules (stubborn/BS bonus or something).

Now where I see this going in regards to special characters is this: they will be limited in the same way that Space Marine ones are.  You will have to choose your regiment tactics (whatever they will be called) and this will open up your choices on the special characters.  So you will not be able to take Creed as your HQ, Al rahim in a platoon, Harker in a vet squad, and Marbo.  Now you will most likely be able to ally with yourself like the marines.  So you could in theory have a Cadian regiment allied with a Catachan, so you could still bring marbo if you really wanted to.

What this means for most of us that love to take marbo as the default elite choice is that may be going away.  You will only be bringing him and other Special Characters if you take the regiment.  So Catachan characters if you take the tactics.  Now you may be able to ally so you can mix it a little, but that will take the valuable ally slot, just to take a few special characters.  Now marbo is pretty awesome, and if the different rules for regiments are good, it may end up being a good benefit to mix it up and take multiple regiments.  Having a scouting heavy force of ambushing catachans with a mech steel legion could be a very mean combo.  However that requires the rules that come out to support that.

So what should you do?  I know many don't like to experiment or change things up with the possible major changes a new codex brings, but I am not one of those.  Keep trying everything that is in this codex until the very day the new one comes, because until it is released the rules are as they stand.  I will continue to bring marbo with my cadians, and maybe other different SCs.  Until the new rules are out and we can see how it all interconnects, don't change how you play or stop trying new things.

Things are going to change a lot.  Its the nature of things and the IG is one of those armies that even small rules tweaks can have massive implications on the army as a whole.  The only thing you can count on is that you will have platoons in a similar if not same form and you will have company command squads and you will have commissars shooting people, oh and tanks, and big guns, and more guns.  How that is all going to fit together is the mystery.  I personally see the fluffyness of the IG being more prevalent. Less of a combined arms imperial guard and far more specialized formations being supported.  The rules will give your play-style more support.  Now I doubt a full on armored regiment will be supported (Ie Leman Russ HQ) and the same for artillery and some of the others, but I do see more rules that give you advantages for bringing more of them.

It will be interesting to see how the new rules will affect the Special Characters, and I am for one excited to see Creeds new tactical genius rule :).  Most likely more special orders will be in the new dex, probably some for different regiments (Oooo maybe one that lets you order vehicles!) and more for characters as well.

All in all I see special characters being more useful but limited by regiment/world.  So the ones you bring will do more, but it will be harder to bring more in without using an ally slot.  As for new characters, I don't know, GW has in some added characters, and in others just changed their rules around.  So I would not be surprised if their was a few minor changes, but expect most of the current characters to be carried over to the new dex.

In short, I recommend that you keep on playing and mixing things as you currently are, until the new one comes out this one is our rules.  Just be prepared for the way you play to change significantly.

GG
Posted by Grumpy Guardsman at 11:55 AM